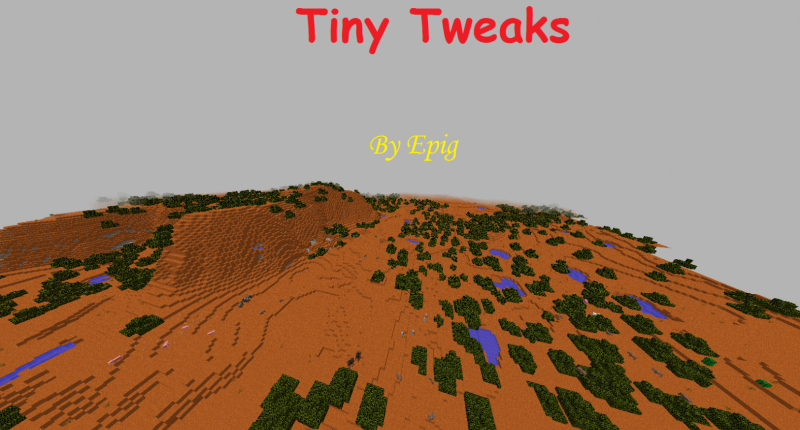 The Outback biome and the mod title. 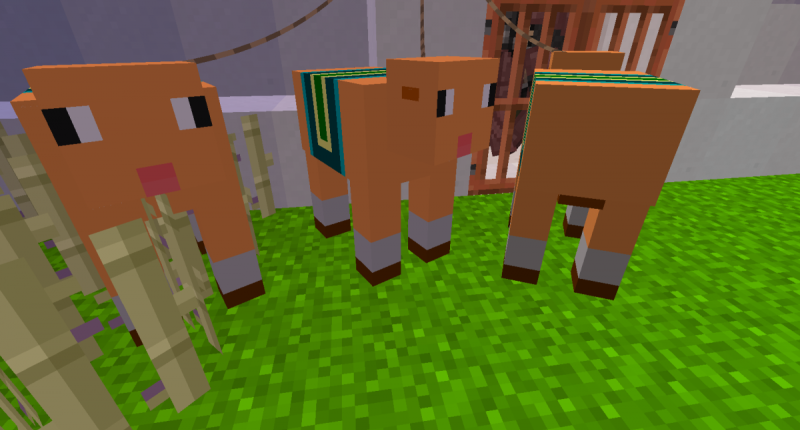 Camels are ridable and can have both saddles and horse armor on but they change the skins of the camels. 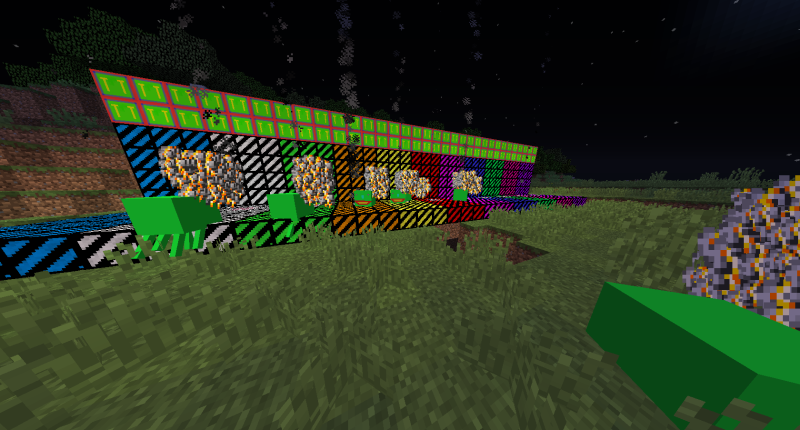 Many of the new blocks as well has new mob 'The Crawling Terror'. 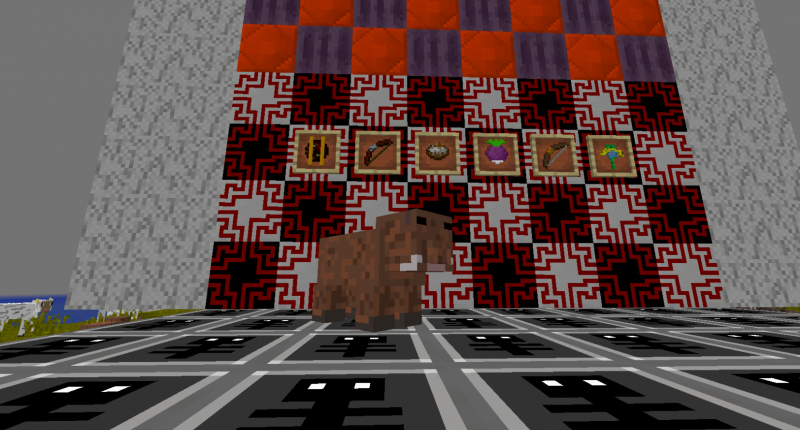 Many of the new blocks and items with the new mob the Wild Boar. 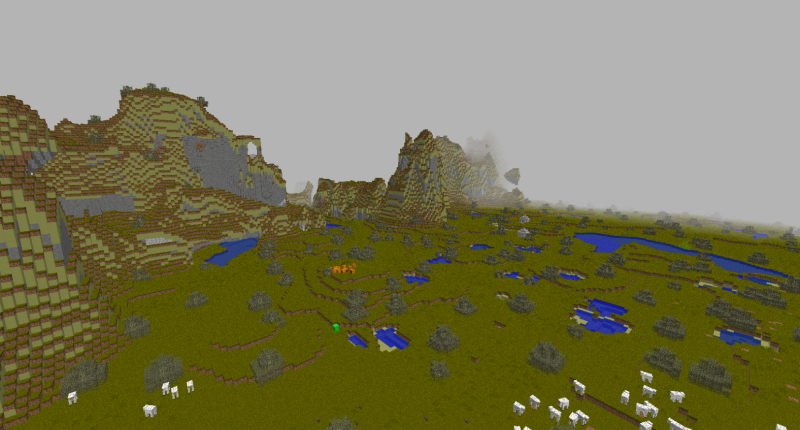 The vast expance of the Stepp with mountins and a Mongolian encampent in the distance and a herd of Goats in the foreground. 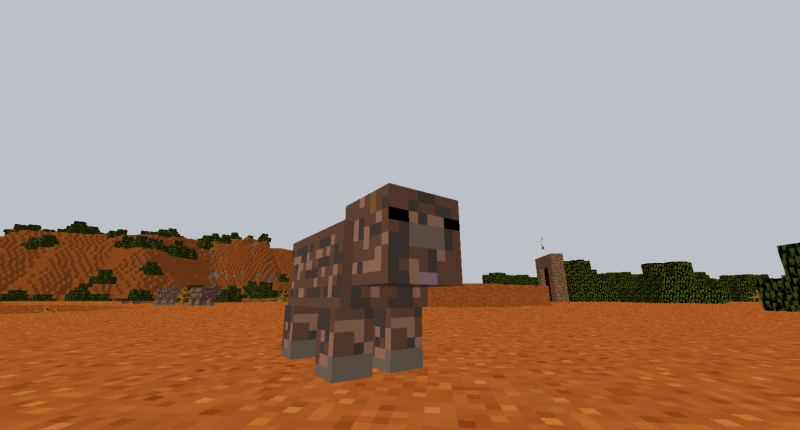 The new and peaceful mob the Wombat.

This mod adds a new biome the steppes in it goats and camels spawn. There are yurts (a form of Mongolian tent) that will spawn in the stepp these will most of the time contain peaceful Mongolian people but sometimes they will have the Khan (a Mongolian king); while some will contain the a Naiman warband and beware since these people are hostile to all but their own tribe and their own Khan. But the stepp people aren't the only ones to inhabit these empty wastelands since there are also goats and rideable camels. There is also a dimension filled with these new mobs structures and blocks. And it isn't just the stepp that is and contains the new features. There are new mobs such as 'The Crawling Terror' which are very strong and in fact have the force field around them that prevents any players or mobs from closing in on them! But there are also 2 new neutral mobs which are the rat and the wild boar both of which will attack you if provoked. There are also new food sources like pancakes and noodles and turnip stew and soup. There are also a variety of weaponry and armour as well as some new decoration blocks and crafting recipes for non renewable recourses (the recipes for which are not only expensive but time consuming to balance it). Within this mod you cannot just recycle your iron and gold gear but now your wood stone and diamond gear! The mod also has its own currency system which can be converted to diamond. Also in this mod is another dimension which includes the new biome (it can also be found in the overworld) the Outback and despite how unforgiving the land might be you might just come across the Wombat one of the most friendly animals to inhabit the mod.

I also have a discord https://discord.gg/748FdCT ) where I take suggestions for the mod and put out screen shots of what I am working on! As well as announcing new updates!

Myself and a friend of mine have also been working on a new addon/expansion for the mod which maintains the a similar theme and will get more updates very soon, which can be found here: https://mcreator.net/modification/47594/tiny-tweaks-addon-1. (I would also like to add that the discords are joined with both a section for the expansion and one for the main mod).

I recommend a mod that will show recipes of the things I have added in this mod personally I would recommend JEI or NEI.

We also now have a website that can be found here: https://sites.google.com/view/tiny-tweaks/home

For those wondering about the way I structure my versions post 1.3.0 I have X.Y.Z. In that structure X is a major update that will only go up if I do a complete overhaul of the mod. Y is a major update and Z is a minor bug fix or small update. I would always recommend updating to the latest Y update, Z updates can be safely ignored; but I release them so people don't have to wait for the next major update for some bugs to be fixed since some people just hate bugs!

1.1.0: (23.9.2018) (first version) It adds the tiny tweak block, molten redstone, molten quartz, dark quartz, steppe logs ,steppe sand, steppe planks, mongol robes, cloth, goat meat, cooked goat meat, goats, Mongol armour, refined iron, knife, lance, scimitar, battle axe, and many other things. 1.1.1: (24.9.2018) Infinite steppes dimension has been added, so the steppes can be more easily reached. The steppes portal has the same form as the nether one but made out of sandstone. You need one sandstone block in the crafting table to get the lighter which has the same function as the flint and steel in the nether portal. Reduced the spawn rates of the Mongol troops after someone spotting them, it was lopsided. Gave the female Mongols knives and made the AI target goats. I recommend updating the mod to reduce lag from the high spawn rates. 1.1.2: (25.9.2018) The steppe animals will now randomly spawn the item dung at their location which can be smelted into dried dung that can be used in a furnace as a fuel. This means it's easier to get fuel in the steppes now. Added molten lapis, molten gold, molten iron, molten diamond, molten emerald and molten refined iron. All of them are made by smelting their respective minerals. 1.2.0: (20.10.2018) The Naiman Khan has now been added. Added a currency system that has 1 unit worth 1 diamond block. Lithium has also been added. It takes a long refining process from water like in real life just look it up! And the method of getting the newly added steel is made out of carbon and iron. Added copper that comes from right clicking powered stone. Added quicksand as well. 1.2.1: (22.10.2018) Since smelting stone resulted in Lava bucket which means free bucket instead of only Lava, a new item - Lava ball was added. Now smelting stone will give you a Lava ball and you will have to craft the Lava bucket using a Lava ball and an Empty bucket. 1.2.2: (31.10.2018) Added cobble armour for early game since iron takes time to get and added compressed obsidian armour which is better than diamond but is very expensive since one compressed obsidian costs 4 obsidian which makes the cost of the armour 96 obsidian. Also I have made netherack renewable with nether wart and cobble stone being the recipe. I also made it so that you can smelt down glass bottles into molten glass that can be turned into molten glass that can be made into glass. 1.2.3: (5.1.2019) Now you can use wheat to craft flour which can not only be used as fuel but as crafting material for raw noodles. You can get noodles by smelting the raw noodles. 1.2.4: (11.3.2019)

+ More colours for the danger blocks with ones like yellow, green and white and many more.

-Due to a MCreator update the infinite stepps became gliched and had to be removed and then re-added which would lead to them all being reset but since the extra dimension had been leading to compatibility issues I took the opportunity to fix the stepp biome after I left it with a high weight for testing and also remove the dimension sorry about that.

WARNING: There is a bug with the mod ID in this version I recommend not using this version!

+After a large amount of work the Infinite stepp has been re-added under the name 'The Endless Stepp' this does however mean (since MCreator wouldn't let me use the old dimension ID for some reason) rather annoyingly they have all been reset.

+ All Features that were added in 1.2.4 have been added and that nasty Mod ID bug has been removed this does still mean that for any won that has a world running 1.2.4 all Tiny Tweaks Features currently in your worlds will be removed so it is advised that you delete everything to do with the mod before updating then using commands to get it all back.

+ All armour types have had their helmets and boots recipe copied to work in the lower half of the crafting tables meaning you don't have to make all your Tiny Tweak armour at the top of the grid anymore.

+ The cloth texture has been redone to look a lot less white and look more like the goats which is comes from.

+ Turnips, a new crop which takes a long time to grow but has a huge harvest.

+ Turnip Soup and Stew, the former is just turnips but the latter includes carrots and beef with the turnips.

+ Rat, a new mob that is peaceful but will attack in a large group if provoked much like zombie pigmen but, they also will try to get inside buildings using any doors that are left open.

+ Longbow, which has extreme accuracy and range to the extent that from up to 100 blocks you don't even have to aim upwards!

+Firebow, a tiny bit shorter range and accuracy then the regular bow but has the benefit of not only setting hit entities on fire but also setting any blocks it hits on fire. But due to the extreme power of this weapon i have made it need a special type of arrow the...

+ Fire arrow, exclusive ammo for the fire bow and can be made by adding any wool or cloth to an arrow as well as either magma cream, fire charge or a flint and steel.

+ Wild Boar, A new animal that in terms of looks and drops is very close to the regular pig but it has more health and upon being attacked will charge you and it will also charge any chickens.

+ Diamond, Stone and Charcoal Nuggets, these nuggets have been added to allow for the recycling of more than just iron and gold tools and armour into their nugget form (note the charcoal is from wooden tools since the recycling is done in the furnace, the others should be self explanatory). The charcoal nuggets can be burnt on their own or be made into regular charcoal and none of the other nuggets have any use but being made back into their regular form yet.

+ Charcoal Block, This has much the same use as the coal block offering 10x the burn time while only needing 9 pieces of charcoal to craft.

+ Red Desert (as well as 3 sub types red desert forest, red desert plateau and red desert plateau forest), new biome which is heavily based on the Australian outback! Sadly since I lack the skills to make models I am unable to make custom mobs models (but there is one mob that can be made using the regular pig model (the wombat)) for the biome however if anyone with experience making models would like to join the mod's discord and make some models and send them to me that way I would be able to add custom mobs to the biome but it does however have its own plant the...

+ Red Desert Shrub, Just a shrub that grows on any type of sand.

+ Wooden nuggets, these can be smelted into charcoal which due to the conversion rates means you can get slightly more charcoal than with regular logs but at the cost of more fuel other than that the only other use is to turn them into sticks which does still have the slight discount on.

+ Wood tool recycling, wood tools can now be recycled into wood nuggets in the crafting table.

+ Greek Fire Grenade, when it hits a mob it will get it on fire and the block it was standing on; sadly there is no way in MCreator to make a recipe for a potion in a brewing stand or a crafting table if anyone knows please let me know using discord.

-Reduced the spawn rates of Rats and Wild Boar and Goats.

+ Wombat, Are a new animal using the pig model and are peaceful at all times and will watch any nearby players!

+ New Dimension, this new dimension follows much the same idea as the Endless Stepp as in it can be reached very early on and contains just the Red Desert and its variants!

https://discord.gg/QcGV25u
I use the discord to help develop my mod be taking suggestions and allowing pepole to vote on what i add next.

Thanks i put most of my weekend into it!