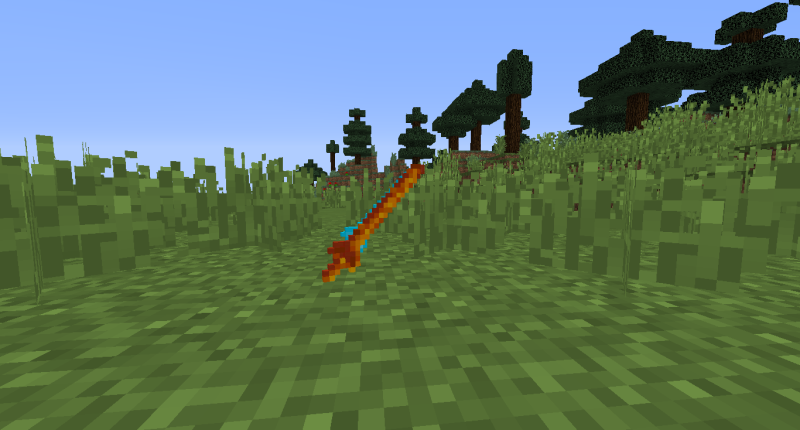 Elemental Katana of Fire and Water.

By its name, Elemental Katanas adds Elemental Katanas to the game, these katanas have a second attack that is at a distance and that the effect is different in each element, from a calcination block to another that releases poisonous liquids.

As a bonus, this mod adds aquatic biome, among them the coral reef that by its same name is the biome that is added in the aquatic update, golden carps that are trees submerged in the deep sea that have embedded gold nuggets, if you have curfew on the ax you can take it you can melt it and get a gold bar Giant Algae Forest that says it by the same name, adds algae structures that scratch the top of the ocean, Aquatic mycelium, which adds marine fungi and will soon be useful ... and others more biome.

As we could talk about the sea, the mod also improves the ocean and deep ocean biome, adding giant rocks and algae that if you pass them they probably won't count. The mod adds warehouses that give the rompers various rewards, add minerals and more different things.

The mod also adds references to the anime's black clover, adds the well-known 'demon house' and launches a project more powerful than any elemental katana.

In conclusion, the mod adds a bit of everything.

Don't expect updates in a row, it's a hobby I'm doing.

The mod is in Spanish and I am not going to translate it into English, sorry.

I have found countless bugs, from here 2 weeks, most of them will be resolved.

You can: Make a review of my mod.

Include it in a modulation package

(credit payment) You can not:

Upload my mod on another page.

Let's say you were the creator of the mod.

I already corrected it, my English is lousy.