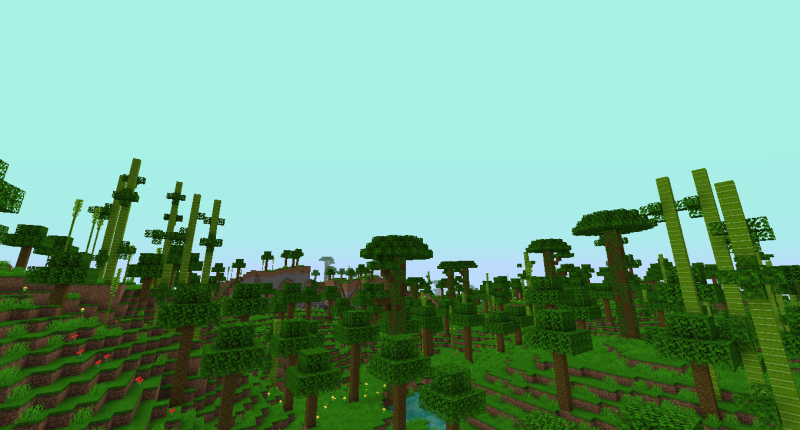 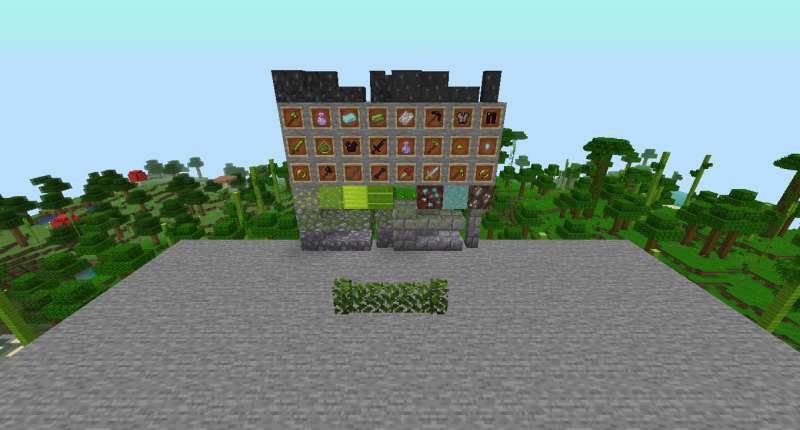 This mod is very vanilla friendly and not overwhelming for moderate players!

Keep in mind, this is a early development download version.

Also, make sure to ask questions or report bugs or request features.

So far, there are 2 new biomes in game.

Maybe you could use it as a decorative block?

Also known as "Royal Granite", has been added to the different rock types.

This block includes a polished type and its recipes are the same as granite/diorite/andesite.

As stated before, these blocks can be found in the new biome, "The Giant Bamboo Jungle".

It can be crafted with/into 9 bamboo.

This block can be crafted or found on the ocean floor.

You can smelt this stuff into prismarine!

These blocks are purple versions of the mossy stone block types.

Hedges are walls with the leave texture.

All leave types have hedges except acacia.

However, they don't change color depending on their biome like regular leaves.

This is the block of the new Expea Ore which i'll get to in a bit.

This is a very special block, used in expensive recipes shown later.

When right clicked on, you will gain exactly 1 level + extra xp. This is very useful when leveling up gets difficult at level 30+.

Expea is a new ore based off of XP. This ore is very useful in leveling up.

Expea and its relative blocks pulse with energy!

It can be found in Jungle type biomes.

It can be made into Expea Steel, which is used in quite a bit of crafting recipes. It has a nugget version aswell.

You can craft expea tools! Which randomly give you xp when used.

Heres some of recipes Expea can be used for...

Living soul sand can be found embedded in regular soul sand. This block drops soul dust which is an important ingredient for nether tools.

As you know, the texture for soul sand has little faces inside of it. However, living soul sand makes the face’s eyes and mouth glow, making it easy to spot.

When stepped on, you will be granted with a new debuff, "XP Drain" which randomly takes some xp from your levels.

Spirit ore is a rare glowing blue ore found anywhere in the nether.

This ore is similar to Nether Gold Ore because it drops nuggets instead of itself.

To specify, the nuggets drop are spirit nuggets, which can be made into Spirit Ingots.

Give xp to the player randomly when used.

Remember, Obsidian is fragile like glass, so the weapon durability should be low.

Also, I feel the textures for these tools are a bit boring, so I might change them.

Made from Spirit Ingots and used with Blaze Rods instead of Sticks.

Have a life steal effect for the weapons.

Much like the spectral arrow, the spectral charm has a, “see through walls” effect, but when right clicked, all living entities are given the glowing effect.

The glowstone is shown to have special properties as shown with spectral arrows, so it is part of the recipe.

This effect gradually increases your xp level and random tics.

This effect gradually decreases your xp level and random tics.

Can be dropped by wither skeletons and crafted into Wither Ash.

Here! Give this to your lovely minecraft girlfriend!

Or maybe give this to your emo minecraft girlfriend?

And Finally, here are a couple other recipes.

That is all for now! Make sure to ask questions or report bugs or request features.

Here is the forum: