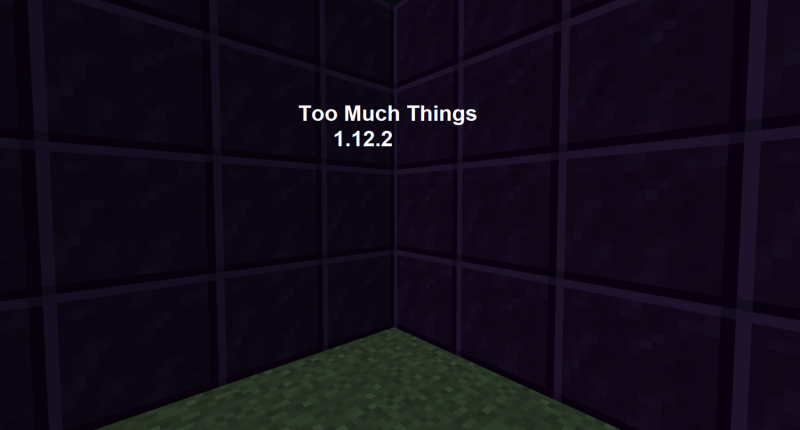 This adds lots of new things to Minecraft. Here are some things that are in the mod:

Polished Obsidian - The best building block ever, and it's armor.

Greenscreen Block - Do you want a greenscreen for editing videos? Don't worry, you have one.

Soul Stone - Don't touch it in the nether.

Ruby - Now you can find them in your Minecraft world, commands, and your creative inventory! Before you couldn't even get it.

How Too Much Things was made:

I wanted a mod better than the More Weapons Mod, so in February I started to develop a mod that added tons of things to Minecraft. When I published it on May 5th it was called Minecraft +. I had to rename it to Too Much Things because you can't have Minecraft in your mod name.

In a town called Mineville there was a scientist experimenting with dimensions. First, they made a Nether Portal, but then they made a portal that brought most things to their dimension. Wither Warriors raided Mineville and it all went down. You weren't the only survivor though, there were more humans that survived. It felt like Mineville was never there before because the Wither Warriors took the materials back to their dimension. A month later, they came back to raid a village but they saw your house. They took it down and again took all of the materials. They raided only one village and took the materials. The portal closed off for good but you found a way to get back to the dimension with the materials. You must redo your whole journey, as the player.

Sorry if there is no crafting recipe for Ender Slime & Steel, I completely forget if there is or not. Also, go check out Too Much Things 2!

Downloads
Modification files
minecraft__0.zip - The only version due to errors.5.19 KB

Thanks! I worked for a long time on this mod.

How do you download this mod? Let me explain why I don't know how to download my own mod. A few days ago I decided to download my mod. I put the mod in the mod file for Minecraft and nothing from the mod showed up. Literally NOTHING showed up!

I just realized it is IMPOSSIBLE to download this mod. I am sorry for whoever downloaded this mod and was upset that nothing was added.