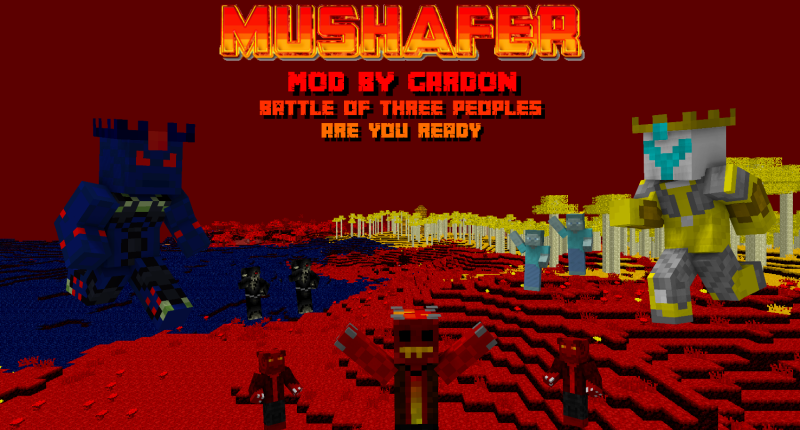 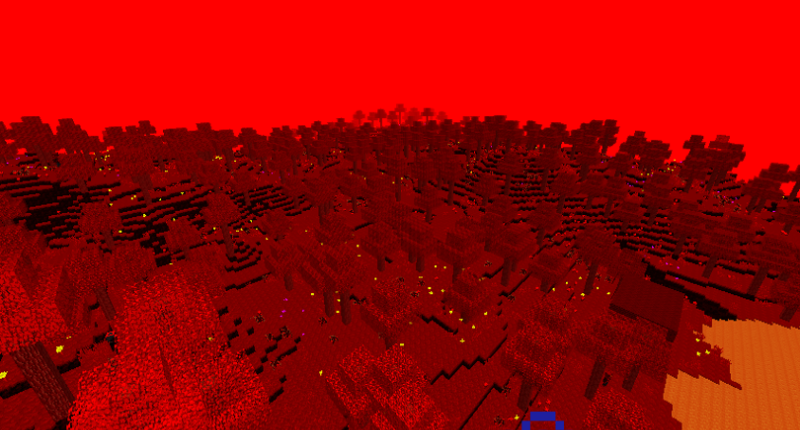 ALERT! There is a second part of this mod available at this link:

How to build a portal ?:

We build the portal from 14 blocks of redstone portal and light up flint and redstone. We build the same way as a nether portal only with the help of the above-mentioned block.

Crimson Lands - biomass with a red grass color, consisting of biomes, clearing and forest. These biomes can generate structures such as: dungeon, castle, tower, camps, Goried's new mob house, about which later, and one fortress with the boss Mushafer Devil.  On this biome is one of three peoples, namely Mushafermans. (I will tell later about the division of roles for peoples. Each of the peoples has the same division of roles.) Biomes also inhabits the ethnic people of Evil Steve, who is hostile to strangers, but neutral to new mobs. On the biome of the clearing grow plants such as grass, two types of flowers, red and yellow, but also strawberries. Whereas on the forest biome some plants from the previous biome appear but there are also pink flower and orange varieties and even a new Fydium tree, from which leaves Mushafer Apple falls.

Dark Lands - this is a dark and dangerous biome for a player with a dark blue grass variety. A biome consists of only one biome, empty and gray. Only one structure is generated on it: the fortress of another new boss: Lord Ombrascuran. Terrain is inhabited by men of Dark Skeletons, which are dangerous for the player and for other people who live on Luce Lands biomes. Only one plant grows on biomes: Mushafer Froit, but sometimes ordinary mushrooms appear. There are no trees on the biomass either.

Luce Lands - the opposite of Dark Lands. The biom is quiet and calm with a yellow grass variety, and the environment is neutral for strangers and the player, but hostile to the Dark Skeleton people. Two structures are generated on biomes: Treehouses for the new people about which in a moment, and the castle of the third new and unusual boss Lord Luce Brintel. Unusual because he is neutral towards the player so fighting him is the quetia of our decision. The area is inhabited by Saint Steve people who are neutral towards the player. Only ordinary grass and huge trees from another new tree grow on biome: Luxcres.

Basalt ore - dark gray and black ore. We can dig it from a stone pickaxe. Basalt we have to make a bar which we make from 4 basalts arranged as if creating a crafting table. We can create tools, armor, sword and block from this ore. Occurs on all biomes.

Red Steel ore - red ore. We can kick it out from an iron pickaxe. We can use it to create tools, armor, sword and block. Occurs on all biomes.

Amethyst ore - red and purple ore. We can dig her out from a diamond pickaxe. We can use it to create tools, armor, sword and block. Occurs on the biomass of Dark Lands.

Pyrite ore - yellow and gold ore. We can dig her out from a diamond pickaxe. We can use it to create tools, armor, sword, block and bow. Occurs on the biome of Luce Lands.

Hellfire ore - dark red ore. The best ore added in this mod. We can dig her out from a diamond pickaxe. We can use it to create tools, armor, sword, block and bow. Occurs on all biomes.

Eltar Block - a utility block from which we can enchant all new types of food. We can enchant all kinds of food, just give the food on the left and the right to convert it from Mushafer Rock to Mushafer Rock in the item version. We still have an Appmix which we make that in the first slot we give an apple and in the second we give the usual Mushafer Rock. We can also enchant Goried's wand in it? In the first slot we insert the wand and in the second one one of the materials listed for each wand:

TNT - for a wand with an explosion spell

Flint and Steel - for a wand with a fire spell

Diamond - for a wand with a lightning spell

Mushafer Crystal - for a wand with a torture spell

Blocks that summon bosses - blocks found in boss structures used to summon them. To summon the boss, stand on this block. Blocks are indestructible.

Mushaferman - (mob belonging to a group of peoples). Mob is divided into three factions: Citizen, Warrior and Archer. Citizen is neutral, Warrior and Archer are aggressive. Mushaferman's Flesh falls out of the mob. It occurs on biomes of Crimson Lands as well as in new mod structure camps.

Mushafer Guard - guard structure such as: dungeon, castle, tower and fortress of Mushafer Devil. It appears only in spawners. Mob is aggressive towards the player, and nothing falls out of him. It occurs only in structures on the Crimson Lands biome.

Evil Steve - ethnic and different mob, aggressive towards strangers in addition to other new mobs. Appears on biomes of Crimson Lands. A mushafer strawberry falls out of it, and sometimes the sword it holds in his hand falls out.

Saint Steve - (mob belonging to a group of peoples). Mob is divided into three factions: Citizen, Warrior and Archer. Citizen is neutral, Warrior and Archer are also neutral, but hostile to the peoples of the Dark Lands biome. Occurs on biomes of Luce Lands, as well as in tree huts of the new structure in mod. He doesn't have his own drop.

Goried Gelcos - an indigenous mob living in his hut in a new mod structure. Mob is aggressive towards the player. It appears in the structure on biomes of Crimson Lands. His amulet falls out, and sometimes his wand.

Obscur Golem - guardian of Lord Ombrascuran's fortress. Mob aggressive towards the player and to the mobs of the people living in Luce Lands. Mob only appears in the Lord Ombrascuran fortress of a new structure in mod in spawners. He doesn't have his drop.

Mushafer Devil - Boss dressed in his own armor and sword. Occurs in the fortress on biomedium Crimson Lands. After killing, Mushafer Devil Backpack falls out and there are prizes in it. To open it, hold it and click right mouse button on the block.

Lord Ombrascuran - Boss dressed in his own armor and scythe. Occurs in the Dark Bioms biomass fortress. After killing, Mushafer Gold Backpack falls out and there are prizes in it. To open it, hold it and click right mouse button on the block.

Lord Luce Brintel - Boss dressed in his own armor and sword. Occurs in the fortress on biome Luce Lands. After killing, Mushafer Gold Backpack falls out and there are prizes in it. To open it, hold it and click right mouse button on the block.

Mod adds a few other new things to us, but I leave the rest to you. I invite you to download my modification, and please give a positive assessment because it motivates me to create further modifications.