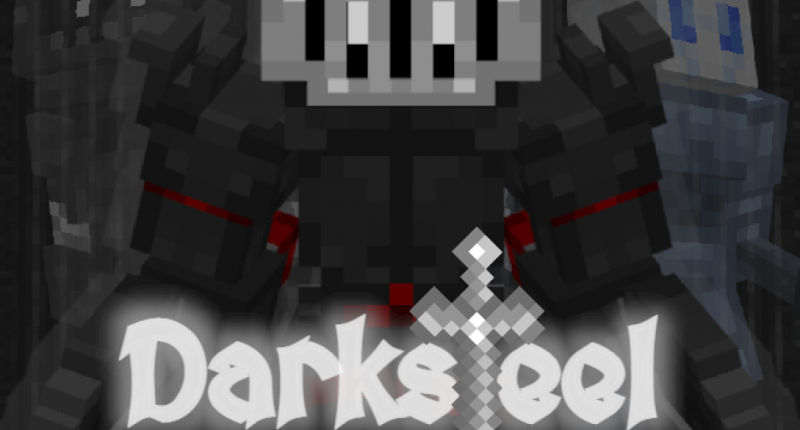 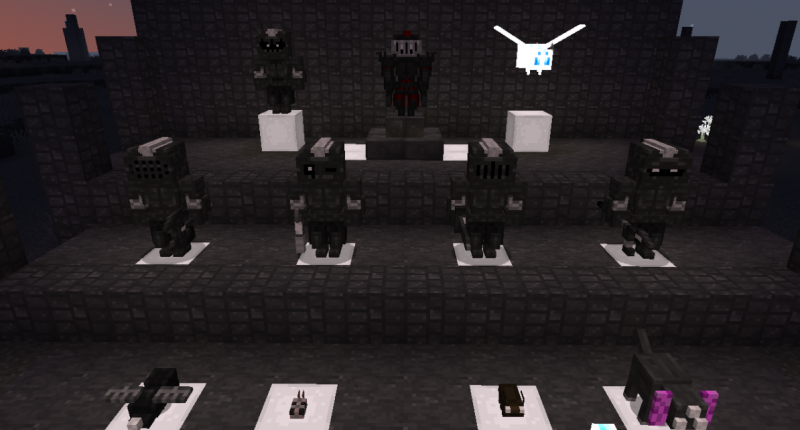 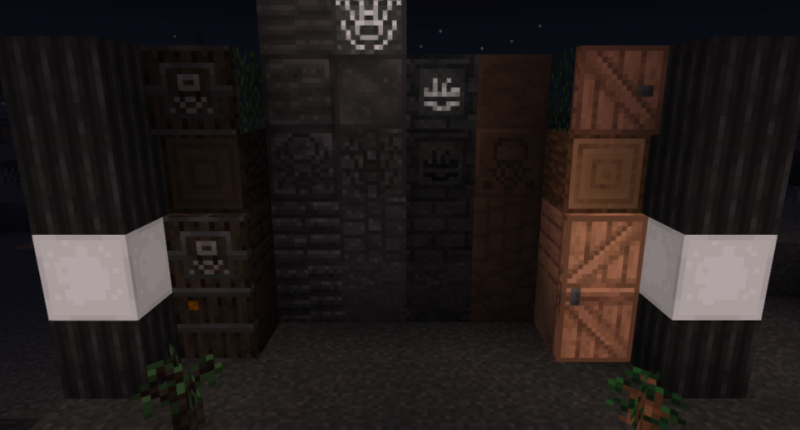 Most of the basic blocks. 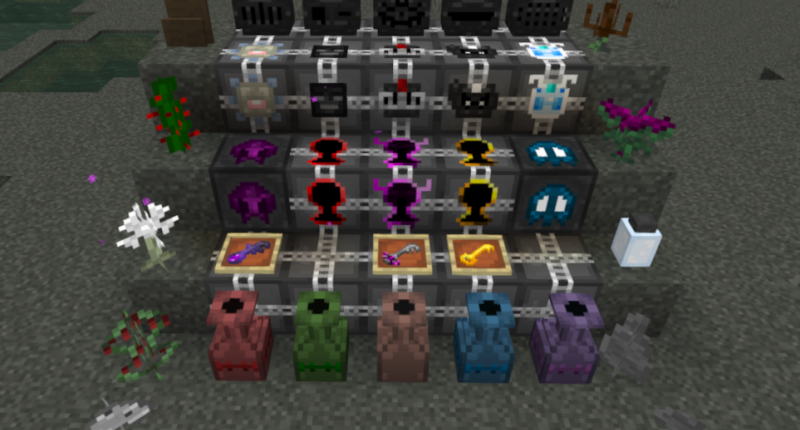 Other blocks (Including dungeoning blocks) 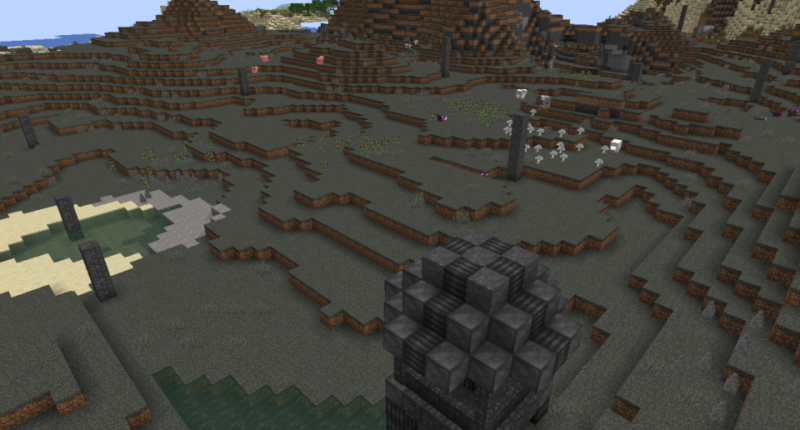 The Darksteel Mod is a mod primarily focused towards the adventuring aspect of Minecraft. As well as adding a story element. (It will be much more existent in the full release I swear)

Currently the images are out of date, I will update them when I can.

The Darksteel Mod comes with a creative tab of items helpful for dungeon building. These include:

There are a fair amount of items and blocks to consider in the Darksteel Mod.

Ores and Metals:
The main way of getting Darksteel is through killing Darksteel based enemies. These enemies drop Darksteel Nuggets, and rarely Darksteel Ingots.
Darksteel tools and armor are one tier above diamond in the same way diamond is one tier above iron. However, Darksteel is much less durable than diamond.
Darksteel can also be obtained from chests and such, like other ores.
Darksteel can also be used to make darksteel pillars and darksteel walls. If you ever end up with too high a quantity. Darksteel Pillars and Walls can be found as parts of structures, but they can't be reverted into ingots.

Gravtite is a brown stone located in teh Deathly Woods. It can be crafted into Polished Gravtite, Gravtite Bricks, and from there Chiseled Gravtite.

Lemonstone is a plated stone that can spawn in sandy areas, such as beaches and deserts. It has a brick, smooth, polished, and chiseled variants, similarly to Ruinstone and other such stones

All stones have stairs, slabs, and walls.

Wood:
Currently, two wood sets exist. Deathly Wood, and Coffee Wood.
Deathly Wood is found in the Deathly Woods biome, it is a dark desaturated wood. The trees also drop rotberries, a low value food that can be eaten quickly.
Coffee Wood is a bright wood found in most grassy biomes. Its a small tree that drops coffee fruit, which can be turned to coffee beans, and then coffee.

Misc:
Vases can be crafted with a 7 clay. Bottom two rows filled completely and the top only in the middle.
They can be colored to red, blue, green, or purple, using the respective dye and a blank vase.
They can be used to store small amounts of storage, and will spawn with loot in structures.

Darksteel Knight Heads and it's variants are purely decorative blocks that rarely drop from Darksteel Knights and other such variants. Unlike most heads, they cannot be worn standardly. The Staff of Replication is needed. Darksteel Heads are one of the blocks with special effects when worn. Being, Darksteel Knight variants become neutral.

The Fractured Sundial is a powerful tool that skips shortly ahead in time whenever activated with redstone. Best used in quick succession.

The Darksteel Mod has 15 entities currently.

Dutent:
The Dutent is a passive mammal native to the Ruins. It drops Dutent Ham, a slightly better steak. Dutents cannot be breeded, but can be tamed. They will occasionally give all nearby players a couple positive potion effects when tamed. (Rate isn't very high, though)

Darksteel Drone:
Darksteel Drones are weak flying machines controlled through light manipulation. They drop darksteel nuggets and do not spawn in the world naturally.

Darksteel Berserker:
One of the generals of Darksteel Empire stationed at the Time Temple to conduct studies of time manipulation.
He drops several Nuggets, bars, and Ingots, a Curse Key, and his Fractured Sundial.

An adult brillfly. An uncommon sight to be sure.
It drops a brillgem, which can be used to make a brillaltar. Which can then be given lightpearls to give night vision.

Brillknight:
A member of a more humanoid variant of Brillfly.
The Brillknight drops the Staff of Replication, and will spawn in the world during night around a player.
The Brillknight can spawn once per player.

Ambient:
A few ambient entities, dont have much use.
But they make it look better so they're welcome.

The Darksteel Mod now has a wiki. I apologize that it's mostly uncompleted, it's still a work in progress.
It contains crafting recipes, mob stats, some known bugs, random trivia, all the good stuff.
Except there's still many missing pages and its pretty much discontinued until the full Redemption update is out.

Click here or the header thing to go to it.

Notice:
The version mentioned throughout the description and images is still in beta.
So keep that in mind

One thing i was wondering, Could you specify what the Biome is, and what it Has? Also, I was thinking you could add some kind of Castle in said Biome and have Darksteel Knights throughout it! And, maybe a Darksteel Bow? it could fire Laser arrows or something like that... But i'm going to shut up before i add a million suggestions.

I probably should specify more about the biome, yeah. There's the Time Temple, which is the closest to a castle I plan on having in the Ruins. And there is somewhat a darksteel bow, of sorts. A ranged weapon anyway. There isnt a recipe currently, but it rarely drops from Darksteel Lightsprayers. I do plan on adding a recipe in the next update. I may also remake the Time Temple, but we'll see.

Hey! I featured this mod in my Mcreator MOTW showcase video! https://www.youtube.com/watch?v=Y6GwIgi-7Do

Don't use the term MOTW or Mod of the Week in your videos, because it is very misleading.

Whoa bro looks pretty cool! Submit it to the MOTW :) I love your idea! Also nice textures and models tho!

o shiet i came back to this mod after a while and it looks so good!!!
you should submit for MOTW

Great mod, the only thing I'd add are some dungeons with all the dungeon blocks this mod adds. Other than that, textures, models and animamtions really look well polished, so with a bit more content, this might as well be the next MOTW ;)

I dont think its too likely anyone will be reading this. But I should mention that I'm entirely remaking the mod from scratch. Models, textures, and all that. So it'll be a while, but hopefully the end result will be worth it.

I Will Only Download If You Add It On Curseforge