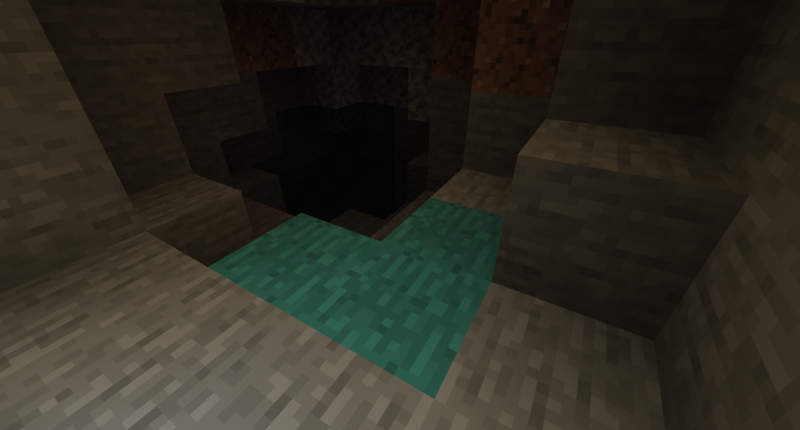 Aero Stone generated in the overworld. 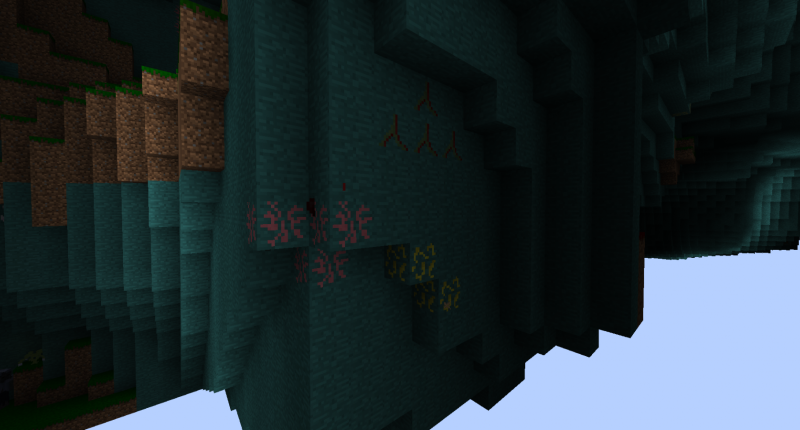 Gems that generated, used for crafting potions and tea. 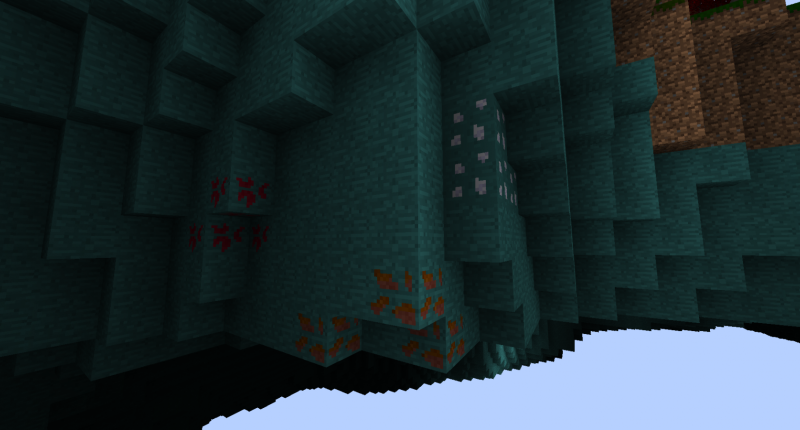 Gems and ores that are used for tools. 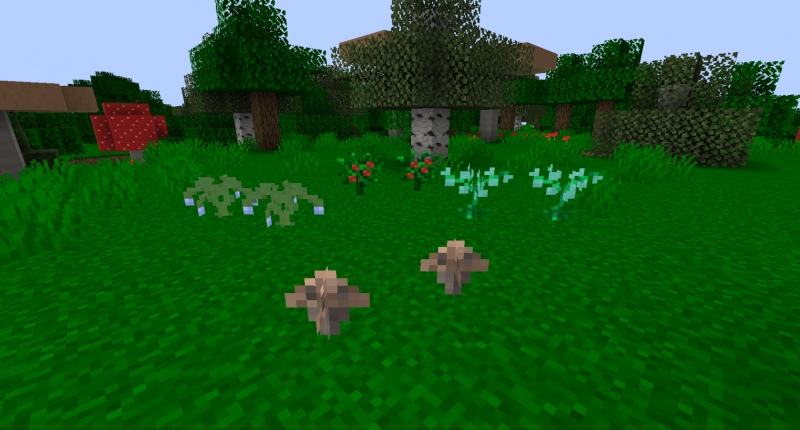 Plants that generate both in the overworld and in the new dimension.

What does the mod have to offer?

Spices are the base of the mod. They are needed to craft some of the tea and potion items in this mod.

To start out, you will need to find plants and ores in the overworld and nether. These will yield gems, fruits, petals and roots for you to use in your upcoming recipes.

Except for the Moonbloom Petal, these ingredients are edible! They also provide a small potion buff, like Fire Resistance of Night Vision. Keep this in mind, because it will be important for future recipes.

After you made the Cup, you will also want to make a Crusher. This is made with 3 Cobblestone.

And with these two items combined, you can crush the ingredient into spices!

Now that you are done with crafting the ingredients, now we can start with making potions and tea!

Combat Vials are currently the main focus of the mod. While comparable to potions, these vials are stackable, do not require brewing to make and can instantly be used!

How to get started?

First, you will need a Pocket Condenser and fill it up with water. An Iron Helmet and an Empty Bucket will allow you to create an empty one.

Besides that, you will need Combat Vials to fill up. You can craft these with 3 Glass Panes.

(It might be hard to see on the image, but the Glass Panes are shaped as if you would craft Glass Bottles or a Bucket.)

And now it's time to craft your potions! 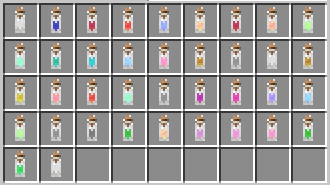 I HIGHLY recommend using a mod like JEI to get the recipes for the Combat Vials. Some of the recipes use items like Golden Apples or Sugar to either enhance the existing effects or to allow new and interesting effects to take place.

An example on how to craft a simple Combat Vial. (Pocket Condenser (Water), Empty Vial and 2 Cherry Spices)

I will not spoil what the potion effects are. You should experiment and find out for yourself! However, the more ingredients the potion needs, the stronger the effect is.

Why do you get Spice Sickness after drinking a Combat Vial?

It would be pretty insane if you could instantly drink 5 different Combat Vials, gaining all positive stats and becoming an unkillable raid boss, wouldn't it?

You are still able to stack potion effects, however you will need to wait until your Spice Sickness wears off before you apply a new potion effect.

Besides using spices to make potions, you can also use them to make tea. Tea will restore some food, however it does not affect your saturation.

To craft some tea, fill an empty cup with water and add some Moonbloom to it. You can also add some spice to grant the tea a short potion effect.

Hydrated is a debuff that is caused by drinking tea. This debuff will always last 8 seconds. Note that the cooldown of using the item itself is 10 seconds, so you can't drink from the same tea more than once every 10 seconds. However, drinking tea and then drinking a different kind of tea (for example, you drink a Cherry Tea and then drink a Fimilite Tea) allows you to drink two kinds of tea's in 8 seconds. It's a little bit complicated, but all you need to know is that you are faster when drinking a different kind of tea than if you drink twice from the same tea.

Why does the Hydrated debuff exist?

To prevent players from instantly drinking their tea, filling up their hunger bar.

To unluck this dimension, you will need a Gaya Key.

You will need to craft a mold from Clay and Sticks, cook it, then use a Gold Ingot, Diamond and Redstone Dust to make the final product.

You will also need a portal frame. The frame is made out of Aero Bricks.

When digging around in caves, you will find patches of blue stone. This is Aero Stone.

Craft these stones into bricks, then shape them up as a portal. Ignite the portal with your Gaya key and enter it! 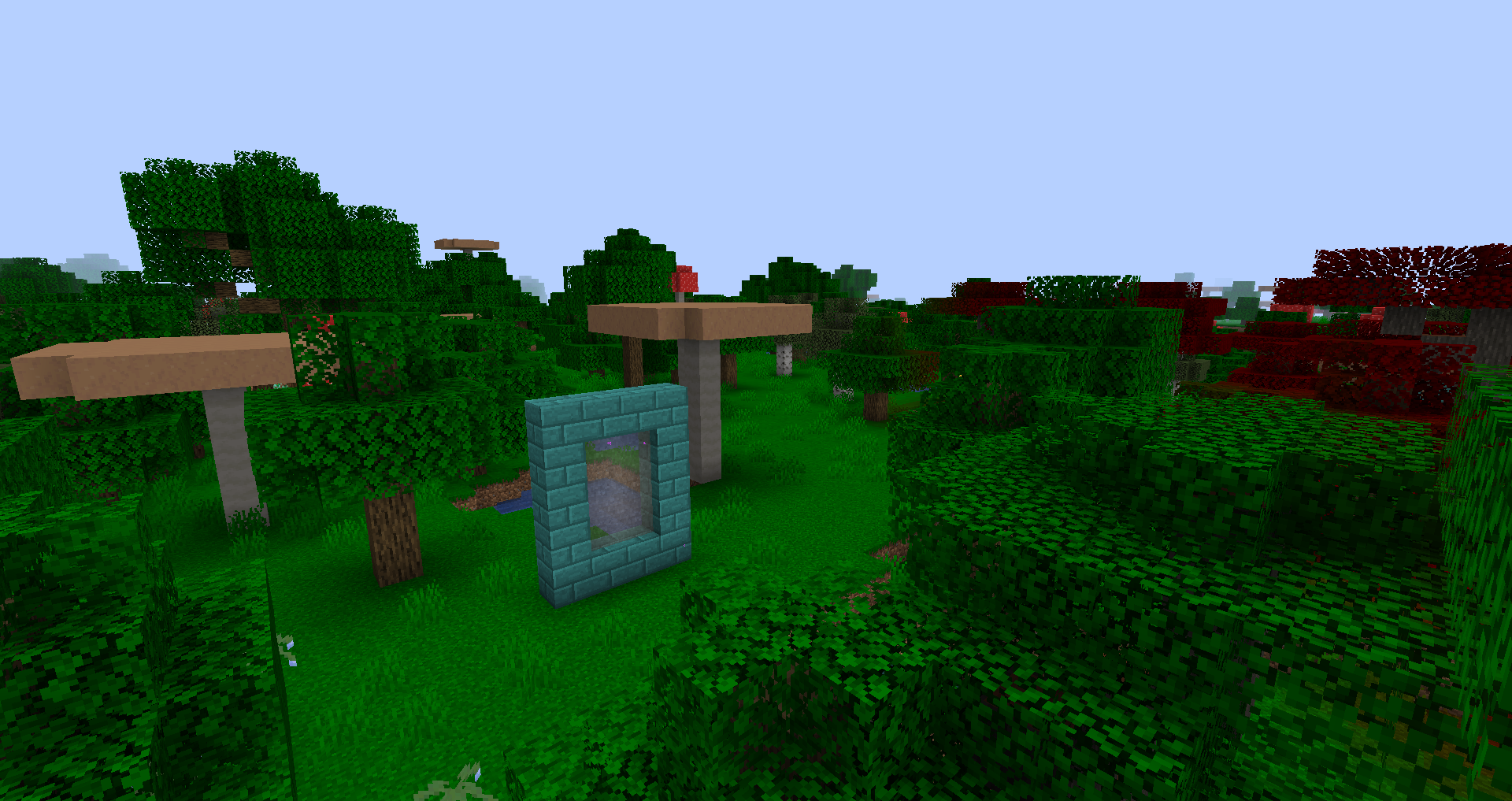 In this dimension, you are far more likely to find ingredients for your potions and tea. It also provides 3 new tiers of tools and swords: Legendes, Derromite and Reddinium. However, take note that this dimension is a hostile environment! Many different kinds of mobs spawn here, mostly agressive. So make sure you are well-prepaired to enter this dimension!

This mod also adds the cleansing effect of a Bucket of Milk to Combat Vials and Cups! Just fill an empty Pocket Condenser with Milk and add it to a Cup or Combat Vial.

If you are in creative mode, then you can use the Cup of Unobtainable Milk for an infinite, short cooldown cleanse. This is great for if you want to test out some potions and you want to get rid of the Spice Sickness debuff.

Calcium is a debuff caused by drinking Milk from a Combat Vial or a Cup. This is a 5-minute debuff that removes the ability to drink more milk.

Why does the Calcium Debuff exist?

It would be silly if you could cleanse all negative effects every 10 seconds, wouldn't it? I think being able to get rid of a bad potion effect every 5 minutes or so is fair on it's own, and especialy for an item that can either be stacked (Combat Vials) or used multiple times (Cup)

In the upcoming update, a new weapon will be added: the Instrument.

Enchantments are added via a special GUI. once enchanted, it can no longer gain new enchants, and you can only increase the levels of the current enchantments.

Instruments will be added in the next primary update (1.1.0)

- Added the foundation for a new weapon, the Instrument (not implemented yet).
- Fixed the Attack Damage and Attack Speed of Legendes, Derromite and Reddinium Axes.
- Aero Bricks now have the description that they are used to create portals.
- Pre-release items like the imbued Legendes Swords are now only available with the /give command and no longer show up in the creative menu.
- Fix for the new item properties to now update for new versions of the mod.

Some textures could be improved, but cool mod anyway :)