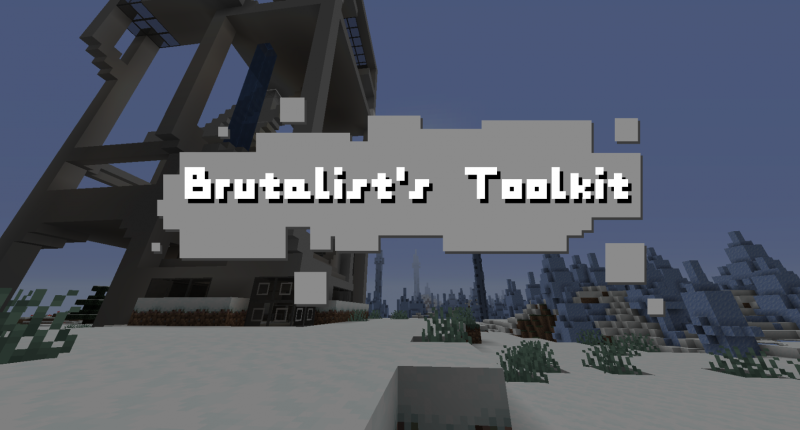 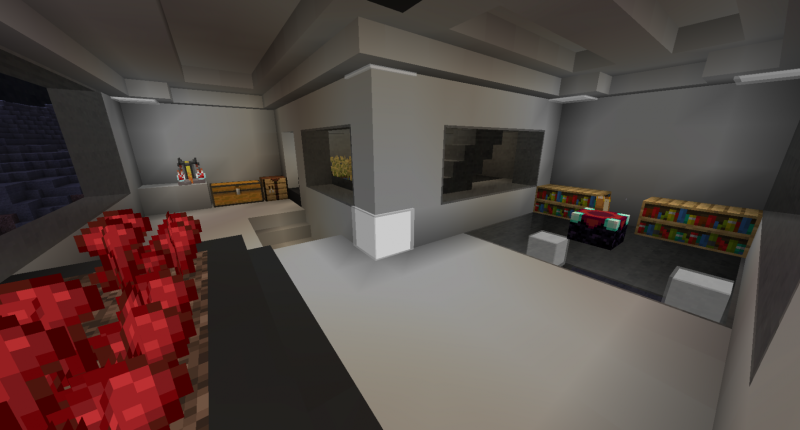 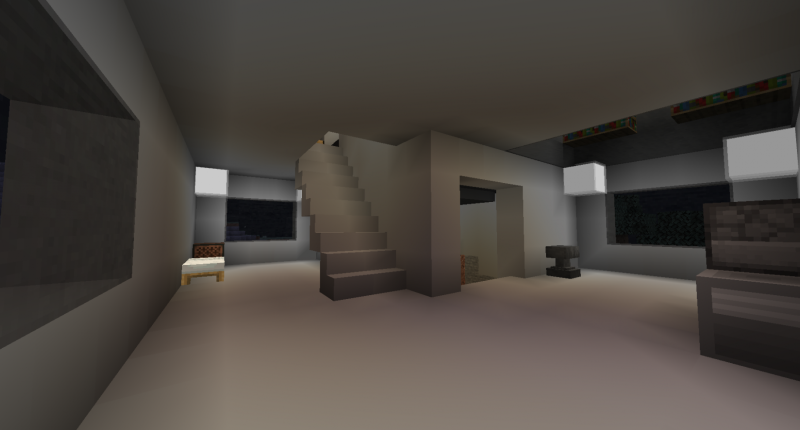 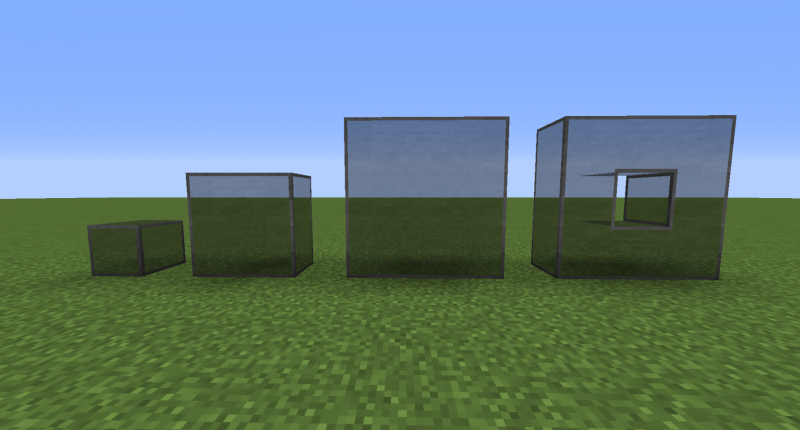 Note: Visit the Curseforge page for all archived versions. This post only holds the latest updates for all minecraft versions. 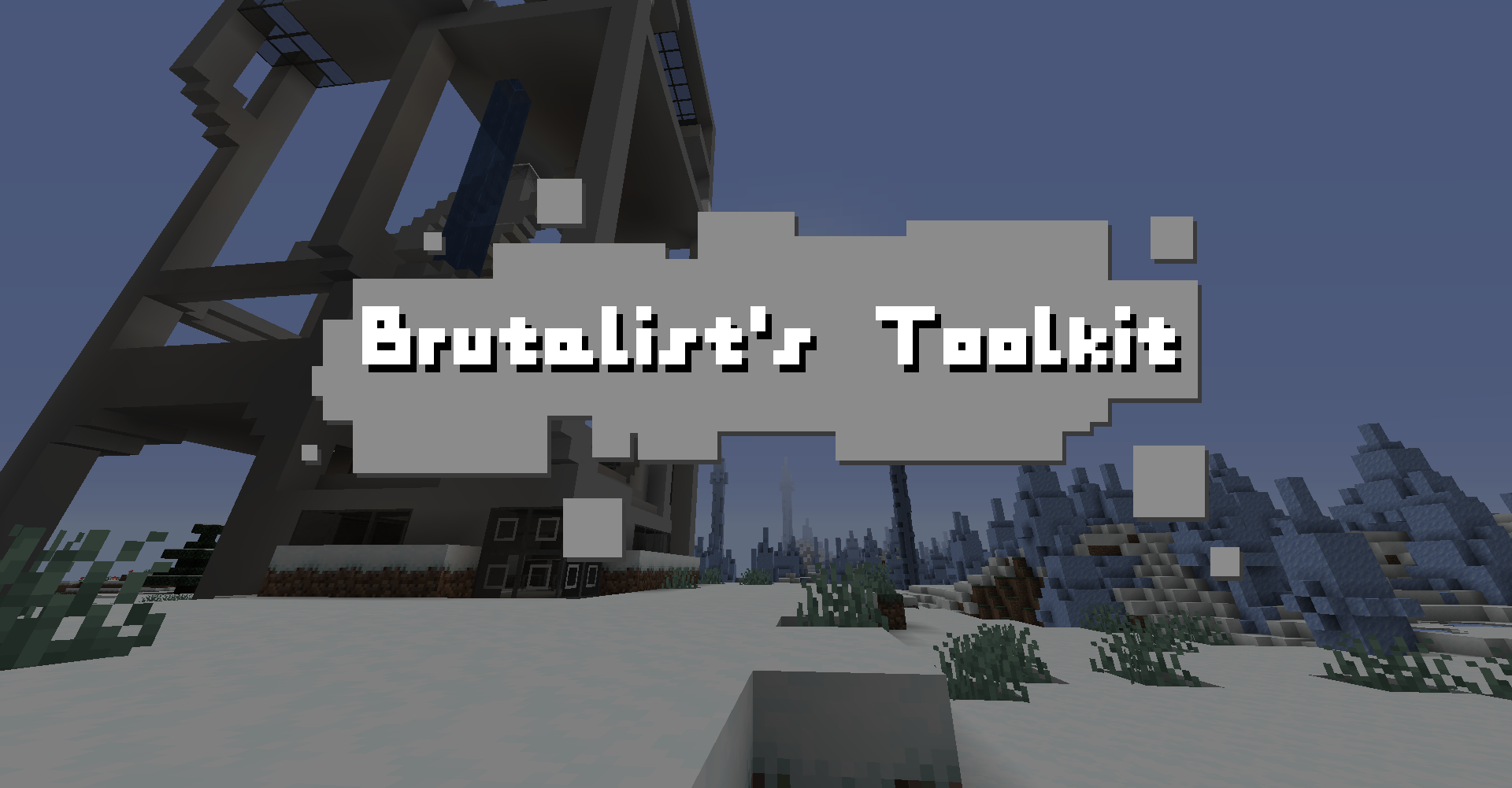 The Brutalist's Toolkit is a mod for Minecraft made with the express purpose of decorating your world with strange, alien buildings. The blocks and items added so far are largely aesthetic. This mod takes heavy inspiration from the free game NaissanceE on Steam, with the primary building blocks and general aesthetic of the mod being nondescript blocks. This mod aims to look pleasing to the player in an alternative way - unlike decorated natural biomes or sprawling caves with glimmering crystals, the aim is to build a city in brutalist architecture. It is an acquired taste and I don't recommend everyone to play it, but if the details I provided so far are interesting to you, then by all means download and play it.

- 5 basic "Render Cubes" in different tones. You can select these tones by using the Cube Blender. These come in slab and stairs form too.

- Render Lights, crafted with Render Cubes and torches. Using a Light Remote, you can change its light level (Sneak+Right Click the remote to set the light level value, then right click a light with the remote.)

- Render Glass, crafted with Render Cubes and glass (Alternatively smelted with Render Dust, which is the same recipe but with sand instead). This dark-tinted glass is compatible with Connected Textures mod (CTM), allowing for connected textures and smooth windows.

- Render Gates. When right clicked, these blocks disappear for a second before reappearing, and they do the same to surrounding blocks like it. It is primarily used for doors, but by creating a long enough chain, a player may create a loop of disappearing and reappearing blocks. This can be used in machinery. Currently, Render Gates appear in Solid and Glass versions. The glass version is compatible with Connected Textures Mod (CTM), allowing for connected textures and smooth gates. Hopefully, if I can figure out how waterlogging works, I can make these gates allow fluids through as well.

- Render Chairs and Render Tables. These are purely aesthetic.

- Render Crates, which act as chests.

- Render Ladders, made with the same recipe as normal Ladders but with Render Cubes instead. It also makes double the amount.

- Render Pacifiers, blocks that eliminate any hostile mob that come within a 10-block radius of it in any direction. It will remove anything instantly, including bosses such as withers, so don't go near one while fighting something if you want its loot. However, it won't work if it's receiving a redstone signal.

- There is a Music Disc that is only available in creative mode at the moment. It features an original track, listen to it here.

- The end-game goal will be to allow the player to enter a dimension much like the world in NaissanceE, an endless structure filled with empty cities and corridors. Along with this, more decorative blocks will be added (Such as vents and fences).

If at any time you come across a bug with this mod or have a fitting suggestion, please submit it to me through Discord @ Umbra#6008 .

- Added Render Ladders. Same crafting recipe as ladders, but made with Render Cubes and get 6 instead of 3.

- Added Render Pacifiers. Blocks that eliminate any hostile mob that come within a 10-block radius of it in any direction. It will remove anything instantly, including bosses such as withers, so don't go near one while fighting something if you want its loot. However, it won't work if it's receiving a redstone signal.

- Added a bar to the Render Light GUI. This lets you know exactly what light level your Render Light is displaying.