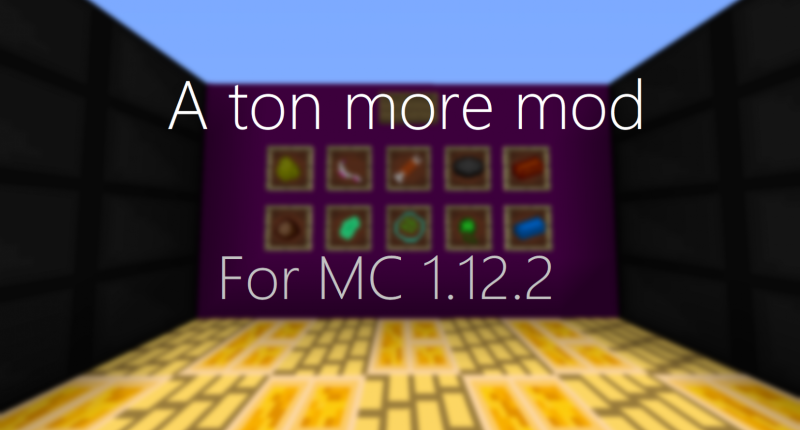 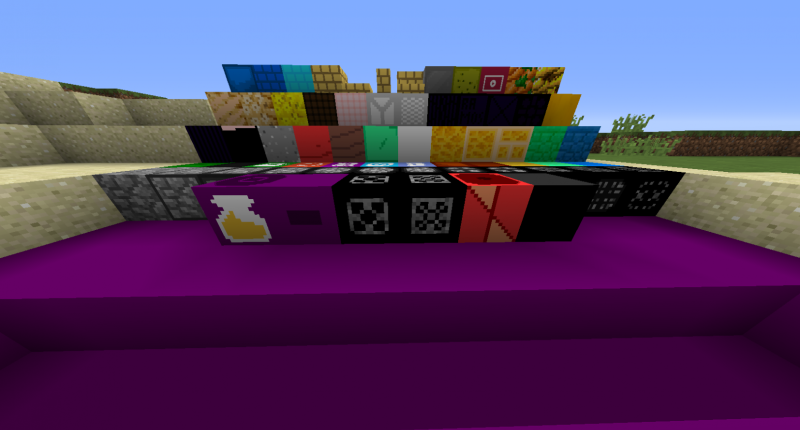 All blocks added by the mod (including machinery) 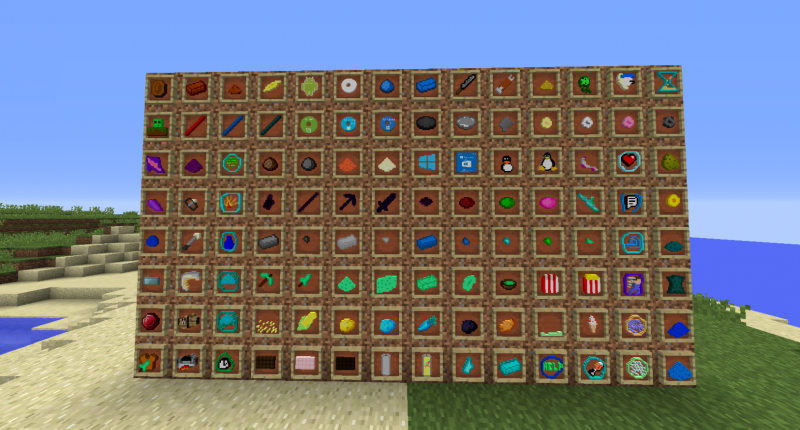 All items added by the mod

A while back (2019 to be exact) I made a mod called "A lot lot more mod" (ALLM) in MCreator. It added a bit of stuff (not much compared to this) and I actually still have a .JAR file of it (I lost the workspace however). This mod was created as sort of like a sequel to it which adds a lot of stuff to Minecraft.

Also, if you love this mod, please consider checking out my YouTube channel Windows 16 (https://www.youtube.com/channel/UCqUajKMFBcS_Ej5mkADeZeg)

This mod adds several music discs (Monstercat Music) which can be obtained by placing a disctemplate in the crafting menu then a specific item to the right of the disctemplate to obtain the music disc. No more creeper-skeleton hunting!

Since you need this to get each Monstercat Disc, you will need 2 Iron Ingots, 1 Steel Ingot, and 2 Cobblestone (which makes 16 disctemplates)

To get Steel Ingots, you will need to place 1 Coal in the middle of the crafting table, then surround the coal with 4 Iron Ingots (makes 4 steel Ingots). It is also important that you don't use charcoal otherwise you will get Stainless Steel (which we will discuss the use of later on).

Crafted like Stone Bricks, but instead with Carrot Blocks.

Crafted with 4 Cobalt Bricks (not Cobalt Ingots) in a 2x2 square (see Cobalt Brick for recipe).

These are called Storage blocks because they save a lot of space when compressed. If a storage block doesn't have a description, just assume it requires 9 of it's respectful material.

Requires 4 Toxoal to craft (see Toxoal for recipe). This block is unstable and will deal 10 damage (5 hearts) when mined and half a heart at a time while standing on it. If you want to get it back, you will need to right-click it with a Hammewrench to safely remove it and claim back your 4 toxoal.

-Compressed Cobblestone (from levels 1 to 14)

-Compressed Iron (from levels 2 to 3)

-Compressed Signalum (from levels 1 to 3)

-Compressed Obsidian (from levels 1 to 4)

Crafted with 5 empty popcorn buckets in a plus (+) shape.

Crafted with 9 Blaze Powder. Creates Endtar when placed on top of End Stone (Process can be reversed with bone blocks).

Used to craft a Alchemical Resource Binder or an Industrial Smasher. Can also be placed.

Just a block. Crafted by surrounding Cobblestone with 4 leaves. Can also be used to craft C418 - Blocks.

Pretty much useless as of the time of writing. You can use installation discs to put operating systems on it but that's about it.

Can be used to convert charcoal into redstone, gold into Signalum, and to fill up Heavy Air Tanks with redstone as storage.

Can be used to combine elements. It also doesn't run on power. However, you will need a Hammewrench if you want to successfully complete an operation.

This mod's equivalent to the Pulverizer (Thermal Foundation) or the Crusher (Actually Additions). This machine also doesn't require any power to function and requires a Hammewrench to function.

Crafted like a normal pickaxe, except with Andesite among the top. Has the same stats as a normal stone pickaxe.

Crafted like a normal pickaxe, except with Granite among the top. Has the same stats as a normal stone pickaxe.

Crafted like a normal pickaxe, except with Diorite among the top. Has the same stats as a normal stone pickaxe.

The Mint Pickaxe is crafted by placing a stick in the crafting table, then placing 1 mint ingot on top of it, then 1 mint ingot to the side of it (left or right it doesn't matter either way). Aside from that, there is nothing out of the ordinary. It's just a pickaxe.

Crafted by putting a stick in the crafting table, then put a mint ingot up diagonally to craft it. I plan on increasing the attack speed for it, but don't know how.

The Milk Bow is a special kind of bow that shoots Milk Arrows, which can get rid of any active effects on whoever it is shot at. A Milk Bow is crafted by placing a Milk Bucket, then place cobblestone to the right of the Milk Bucket, then place 2 sticks; 1 above the cobblestone, and 1 below the cobblestone. then do the same for the string; just place one above the milk bucket, then one below the milk bucket. To craft Milk Arrows, place 1 flint at the bottom-left of the crafting grid. Then place 1 stick diagonally to the top-right of the flint. Then, place 1 milk bucket diagonally to the top-right of the stick to craft the Milk arrows.

Does 9 melee damage. Has less durability than Diamond Sword to reflect how Obsidian can break easily in real life. Crafted like a normal sword, but with an obsidian stick for a handle and obsidian for the blade (I plan on making the blade out of obsidian shards, but that's a fix for the next update).

Does 8 melee damage and has 1884 durabillity. Crafted like a normal sword, but crafted with emeralds for the blade (handle remains unchanged).

Speaking of blade, the Emerald Blade is an upgraded variant of the Emerald Sword that does 8.4 damage. It has 2001 durabillity (no, not the year 2001), and is crafted by placing an Emerald Sword in the crafting grid, then placing an emerald up diagonally. Also, if you've played a game called Hypixel SkyBlock you probably have heard of this weapon and known that it deals more damage the more coins there are in your purse. So, I made it do more damage the more coins you add to it. You add coins to it the same way you added the emerald to your Emerald Sword to make the Emerald Blade (In other words just craft it the same way you crafted your regular Emerald Blade). You can add up to 16 coins to your Emerald Blade (since each coin adds .1 damage it totals out at 10 melee damage). Coins are crafted by placing a Gold Nugget in the crafting grid. Then you place a piece of Cobblestone above your gold nugget to make the coin.

-Aspect of The End

This sword is also present in Hypixel SkyBlock. The sword does 6.5 melee damage and is crafted by placing a stick in the bottom-left of the crafting grid, then placing a Resoning Rod (see Resoning Rod for recipe) in the middle. Then you place 1 ender pearl above the resoning rod and 1 ender pearl to the right of the resoning rod to craft it. It does the same ability as it would in Hypixel SkyBlock (teleport you up 8 blocks). I don't know how to make it teleport you 8 blocks in the direction you're facing so I made it always teleport you 8 blocks up into the air. As of right now it has 232 durability and you only lose durability when using it as a regular sword so I plan on nerfing the teleport ability (since it is a bit op teleporting infinitely into the air without any problems).

The last item from Hypixel SkyBlock on this list. Crafted like a normal sword except you use reincarnated cane scrap (see Reincarnated Cane Scrap for recipe) for the blade. The Rogue Sword allows you to convert 1 sugar (I couldn't integrate mana into the game so everything is going to be like this) into Speed 4 (Equivalent to 20 speed in Hypixel SkyBlock) for 30 seconds (600 ticks).

Used in the crafting table to skin Apples (which makes skinned apples). Also I tried making the damage on the Butterknife 1.7 (since it doesn't have durabillity it will never break) and now the damage is -1.3 so I don't know where that came from.

Crafted by placing an Butterknife in the crafting grid and an apple to the right of the butterknife. When eaten, it restores 4 hunger points (2 hunger bars) and 1.5 saturation. Also used to craft lemons.

Can be smashed into dust with the Industrial Smasher or turned into Mint Blocks. Mint can be used to craft Linux Mint (which will later be used for the Computer), or can be eaten to restore 6 hunger points (3 hunger bars) and 0.6 saturation. Crafted by placing Stone in the middle of the crafting grid (not cobblestone or 1.14 Smooth Stone), then surround the Stone with 4 Mello (Same way you made steel ingots), then fill up the remaining slots in the crafting grid with Sweet Grass (recipe produces 9 mints).

-Powder Mint in a Bowl

Another way to eat Mint is to smash it into dust, and then place the mint dust in the crafting grid right above a bowl to craft your Powder Mint in a Bowl. When eaten, it restores 5 hunger points and 0.5 saturation.

Crafted by surrounding a piece of sugar with 4 grass (same grass you used to craft lemons). Can be eaten to restore 2 hunger points (1 hunger bar) and 0.3 saturation (eating will also give you the nausea effect), or can be used to craft Mint.

Crafted by surrounding Wheat with 4 dirt (producing 4 corn). Corn cannot be physically grown (and cannot be found), so you must re-produce corn by placing it in the crafting grid, then place 1 bonemeal to the right of the corn to make 3 corn. Can be eaten raw to restore 5 hunger points and 0.6 saturation, or can also be smelted into Dried Corn which is used to make Popcorn.

Obtained by smelting Carrots in the Furnace. When eaten, the player restores 6 hunger points and 0.2 saturation.

Crafted like a Golden Potato, but instead with Diamond Nuggets. Can be eaten raw to restore 7 hunger points and 7.1 saturation.

Crafted by surrounding a Carrot with 8 Diamond Nuggets. When eaten, it restores 8 hunger points and 17.6 saturation.

Crafted by surrounding a Potato with 8 Obsidian Shards. When eaten, it restores 8 hunger points and 7.3 saturation.

Crafted by placing Wheat at the bottom of the crafting grid, then placing a milk bucket above the wheat, then place a Chillelement above the Milk bucket to make your Ice Cream. When eaten, Ice Cream restores 5 hunger points and 0.2 saturation.

Crafted by placing 1 Chocolate in the middle of the crafting grid, then place 1 cocoa beans to the right of the chocolate, than place a Refined Gray Dye to the left of the Chocolate. When eaten, Dark Chocolate restores 6 hunger points and 0.4 saturation.

Doesn't have a use as of right now, but may be used later to give things a dark-purple color. Crafted by placing an Ink Sac (black dye) next to some Purple Dye.

Used to craft Lemons. Crafted by surrounding a Refined Yellow Dye with 4 sugar.

Obtained by placing an Ink Sac (black dye) next to Red Dye in the crafting grid. Used to craft Rubies.

Crafted by placing 1 Red Dye in the crafting grid, then place a Pink dye to the right of the Red dye. Used to craft Amethyst.

Version 1.0.4: Revolution of the Tools

-Diamond Shard is now deprecated. Upon updating to this version, you have until the next update to convert any diamond shards you have back into diamond nuggets or they will be removed entirely.

-Added 4 more Monstercat Discs (I will also let you find that yourself; just remember you can always look for it in the creative inventory)

-Speaking of the creative inventory, there is a new layout (I believe you have to load a new world to see changes)

-Added 2 new Monstercat Discs (I will let you find that yourself; If you don't how to find it just look for it in creative inventory)

-Aspect of the End now requires you to have 1 Ender Powder in order for ability to work, with a 20% chance for you to lose your Ender Powder.

-Obsidian Sword is now crafted with Obsidian Shards instead of regular Obsidian.

-(FIXED: Bug #000002) Chocolate Block crafts back into 1 chocolate instead of 9 chocolate.

May you want to update the mod to 1.15.2 :)
The mod adds a lot of things that look quite interesting, but you could really improve the logo

If you need someone to make textures just write to me.