A showcase of all the iron-based weapons in this mod 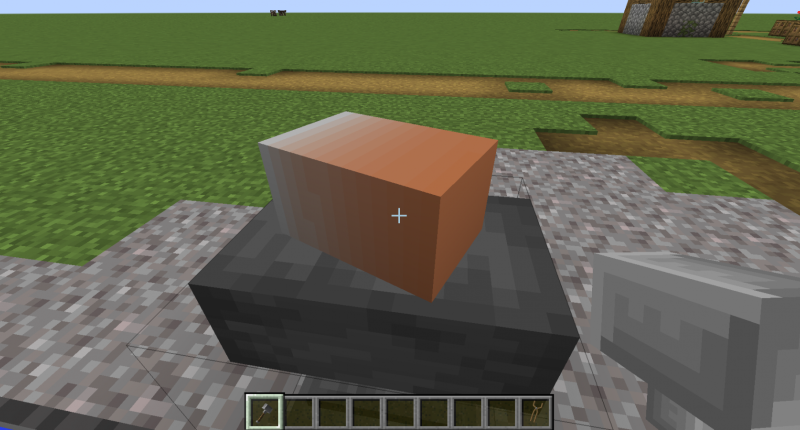 After putting a large ingot into the furnace, it's time to get pounding! 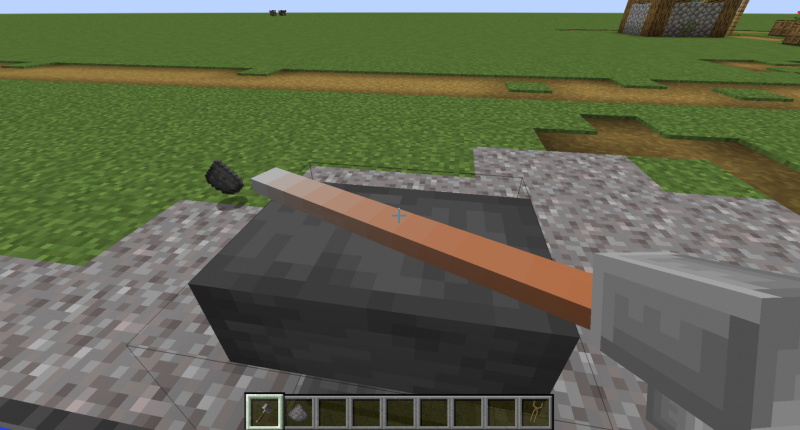 Pound it into the shape you need, the size determines the weapon! 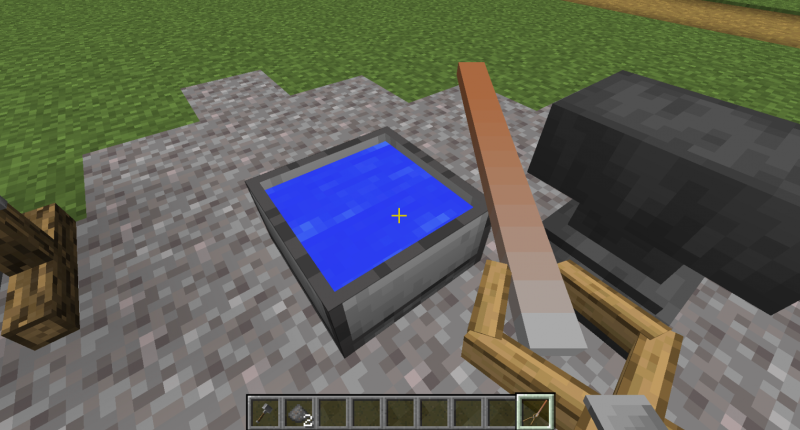 Once you have the metal shaped out, grab it with your tongs and dunk it into a water basin to get your blade! 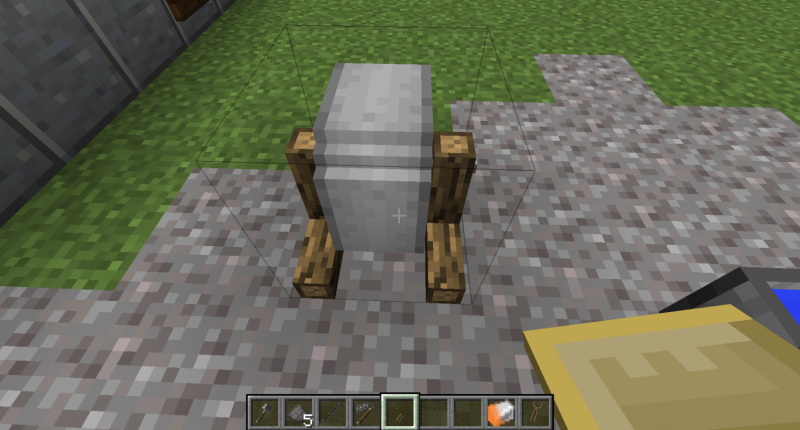 The first pounding should result in a metal plate, grind it down into a halberd blade, then into a war-axe blade!

Simply put, this is a medieval weapons mod that adds, you guessed it, MEDIEVAL WEAPONS! As an avid Minecraft player, I was often unsatisfied with the lack of 3D weapon mods, but once I discovered MCreator, I decided to change that. The mod adds a total of 15 different weapons of distinct metal types, making the grand total 75 weapons! The main materials are: Iron, Bronze, Silver, and Blaze-Powder-Infused Bronze. Silver ore is found naturally in the world but is slightly rarer than iron, bronze on the other hand is a different tale.

Any metallurgist will tell you bronze isn't found, it's made, well it's the same here. Bronze in this mod is a combo of iron and gold, giving it the durability of iron, and the enchantability of gold! However, coal dust is required to fuse the iron and gold together, so smash some coal on the smashing block. 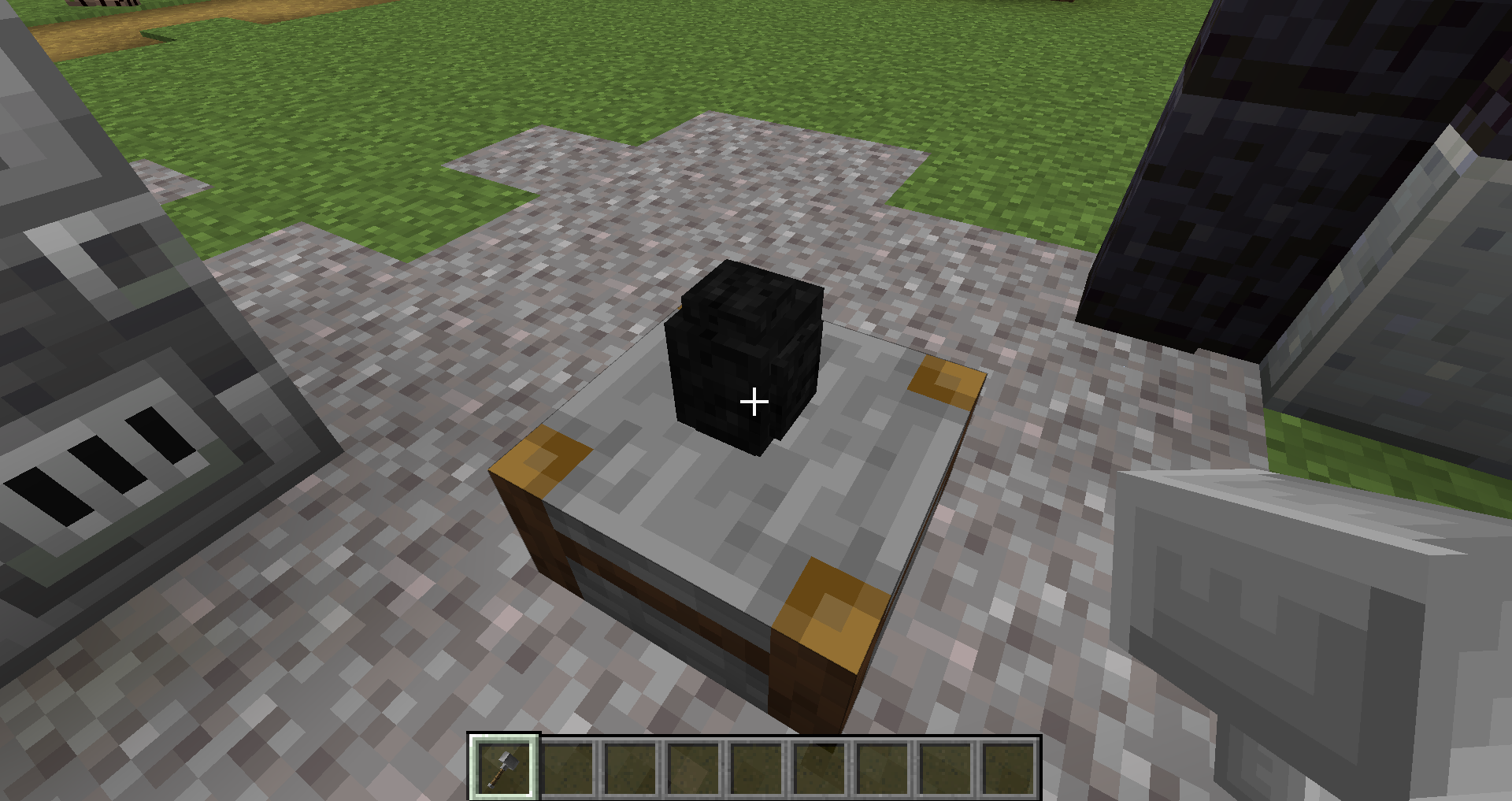 Ingots required to make weapons must first be fused together with coal dust, using just 2 ingots to make a large, workable ingot. The ingots must then be placed in a furnace, blast furnace, or campfire to get them to workable temperature. Once they're heated up, simply plop the ingot onto an anvil and pound away with your trusty forge hammer. Each pounding results in metal slag being removed from the ingot, this can be re-smelted into nuggets for later use. The first pounding will give you a plate, grab it with your tongs and cool it off in a water basin. After that ,rub it against a grindstone to get a halberd head, if that's not what you need, grind it again to get both a spear head, and a war-axe head. If you continued pounding, the ingot would lengthen out into large rods, depending on what size it is determines the weapon, the largest being a greatsword, and the smallest being dagger. Some weapons however are a little more complicated, the royal armory is a combo of silver blades, and golden accents. This combo makes it both extremely enchantable, and deadly to the undead. The hilts of these weapons however, can require emeralds, or emerald chunks. Trade with a villager, and plop that emerald onto your trusty smashing block.

Other weapons however, aren't so elegantly crafted, the Infernal series of weapons are quite difficult to obtain, regularly requiring large amounts of Blaze powder, to infuse with bronze blades at the smithing table. Even then, there is one more ingredient necessary for crafting these Hellish blades, the teeth of a Hoglin. These horrendous beasts can drop up to 2 teeth, a minimum of 4 required to craft even one of the infernal weapons.

The end result, however, is quite worth it, being a weapon that naturally sets entities on fire, and has the equivalent damage output between diamond and netherite.

Yes, there is lots of fun to be had in this modification, and I had a blast developing it. I am welcome to suggestions for future updates to this mod, such as new materials, or weapon types. Thanks for checking me out, and enjoy!

If you want a visual demonstration of how to make some weapons, or just a showcase in general, here's a YouTube link: https://www.youtube.com/watch?v=jcWBCHW0iYQ

v1.1.0 - Adjusted bounding box models for grindstone and anvils to be more appealing.

v1.2.2 - Added Rapier weapon type, a fast blade that can cause bleeding, a new effect!

Added the leather-working knife, a new tool for crafting.

Added the Double-Bladed War-Axe, another type of war-axe for variety's sake.

Adjusted texture for bronze weapons to be more, orange-goldish.

v1.2.4 - Bugfix where Silver ore dropped ingots instead of the ore itself..

Adjusted textures of Bronze and Infernal weapons, giving the bronze weapons an orange tint, and changing the infernal weapons to be a more saturated red...

Added new firearms centered around the Napoleonic wars, which include:

The muskets can also be fitted with a bayonet to add melee damage, simply add an iron dagger blade to the regular musket, and a silver one to the Napoleonic.

Added Napoleonic Officer's Swords, one being a bit fancy, while the other is uber fancy.

v1.2.55 -Bugfix: By some stroke of luck, there hasn't been a crafting recipe for the grinding stone in the entire history of this modification. Definitely fixed that..

v1.2.57 -Bugfix: All of the firearms were named "Flintlock Pistol" instead of their appropriate names

Fixed sandpaper having an item-usage of 100, instead of 10..

Removed buggy War Uniform, as it is a hint of what's to come, leaving the cloth-weaving loom in though...

Thanks for receiving me MCreator Community, I hope you enjoy this mod. I apologize for the long description, as it serves as a small tutorial as to how to use the mod!

The mod looks really cool! I think the description doesn't look the best but you can make it better by adding sections with titles or also make a short video with the process of making the weapons :)

Just added a YouTube link! It's for a showcase I made for the mod at the same time as uploading.

What a unique idea. I love it!

Updated! Added the Cleaver weapon type, for slow, and heavy, but hard-hitting attacks!

I really love how much manual crafting is needed for these. Didn't play it yet, but this is that kind of realism I miss in RPG games - it wouldn't make anyone hurt, yet would be a minigame in itself ^^

That's what I was going for, I wanted it to be both realistic and simplistic. I just figured out java modeling, so I'll be trying to add 3D armor, and realistic armor crafting, like bending plates with the hammer to make helmets

Updated! Added the Rapier weapon type, a fast blade, that can cause bleeding, a new effect!

Major Update! Added 3D armor for all material types, each having a distinct style and aesthetic.

Fixed a somehow unexpected bug where silver ore would drop ingots instead of the ore itself...

Congratulations for winning Mod of the Week :D
I love the process behind creating these weapons! Also the models are gorgeous ;)

Thanks a bunch, I'm always making little mods in my free time for kicks, and this was one that got the most attention. I'm hoping to work and many more mods of this scale

A great mod, especially for the first one. I hope that you will develop this mod further :))

I'm always looking for suggestions for new materials and weapon types. I'm thinking of reshaping it into a Weapons Through History mod, where it shows the history of weapons as the ages go by. So I could add stone age weapons, maybe renaissance weapons like muskets, then Napoleonic weapons like uber-fancy swords, and eventually modern weapons like those used in WW1 and beyond