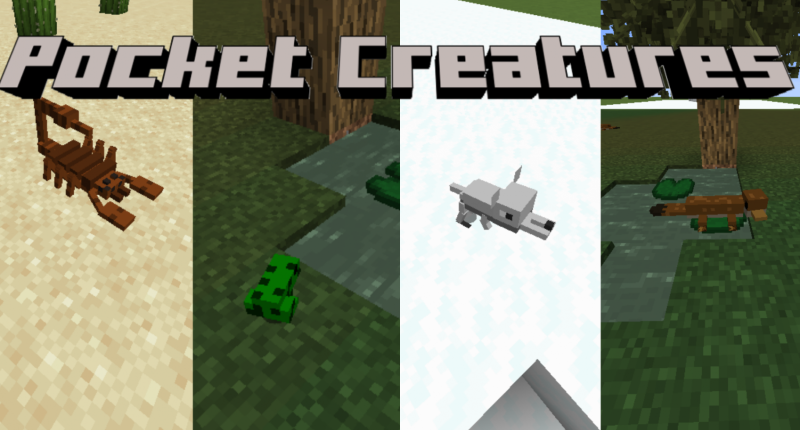 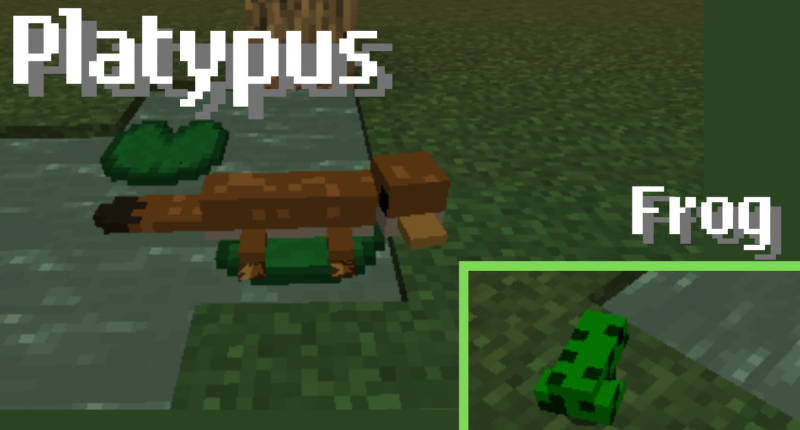 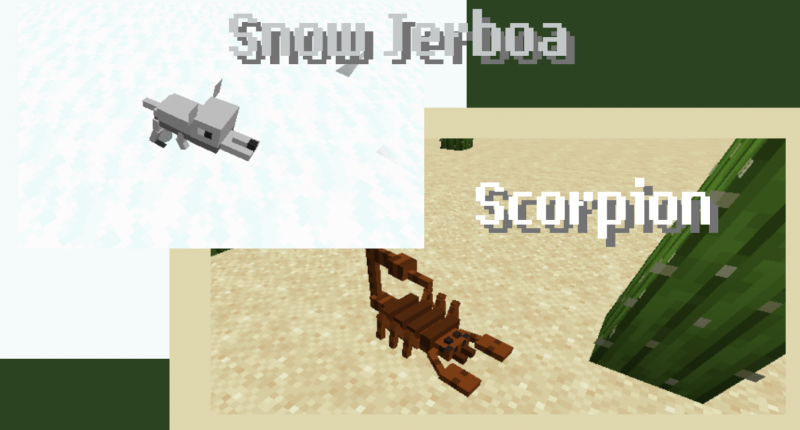 This is the Pocket Creatures Mod! In this mod, you can look at animal behavior, capture the animals in bottles, and even tame or fight some of them! With new custom mobs and items, you can build a lab or make an expedition site to research and watch the animals! Capture them using an Animal Bottle or Animal Bucket which can be SMITHED by putting a bucket or bottle with any type of flower in a smithing table! Capture the animals by right clicking and they can be in your hand in a second! In this mod, you can also craft a Debug Stick and Command Block in survival! To do it, you need a Tiagi Tree, a kind of plant found in many different overworld places. First you need to break it using your hand. Then you will get a Tiagi Stick which, when you craft it with a Nether Star and Dragon egg you get a Debug Stick! For the Command Block, you need 5 electricity, 1 redstone, 1 observer, 1 debug stick and 1 acacia button. Have fun trying to capture them all! Take note that once you capture a mob, they cannot be released. You can use my mod in any modpack that you need.

-Striped Antas Lizard: Blue and Yellow. Found in the Savanna

-Blue Dragon Gecko: Blue and Black. Found in many places

-Bat-Winged Draco Lizard: Green and Purple/Pink. They are found in trees mostly in Birch Biomes

-Eneen Mouse: Light Brown and very small. They are found in the mountains and snowy places

-Snow Jerboa: Full White and small. They are found close to Eneen Mice

-Lanzo Burrowing Frog: Dark Green. They are found in Swamps and Rivers

-Pocket Kirbird: Yellow and very tiny. They can be found anywhere and are very, very tiny

-Oaktap Snake: Blue and Green. They can be found in Swamps

-Gregorio's Desert Scorpion: Brown. They attack players and some other mobs. They live in Deserts

-Fly: Can be found in Swamps. Frogs love to eat them and can be tamed using the Fly's drops. Flies also are immune to all damage except Frog and human attacks

-Veiled Chameleon: Green and Cyan. They are found in jungles but unfortunately don't change color

-Scorpion Mace: Crafted with Scorpion Tail on top, Iron in the middle and Scales on the bottom

-Platypus Beak: Dropped by Platypus. Can be smelted into electricity

-Battery: Crafted with Electricity in the middle, and Iron on top, bottom, left and right

-Electric Gun: Crafted with Bow on top, Electricity in the middle and Battery on the bottom. Needs battery for ammo

-Researching Music: Crafted by putting Gold Block in middle, Glass on left, Blue Dye on top and bottom, then Iron on right

-Vote for the Allay

-Fixed all bugs and glitches

-Renamed the mod itself to Pocket Creatures

Nice mod. You should put more images for show what the mod do.

yo nice, but you might want to fix those shadows :P

Added many new things in the 1.1 update!

Added much more things in the 1.3 update!

vote for the Copper Golem :p

This mod is finished and done! I'm still taking suggestions for fixes though