Bungle Shaman and it's Sprites 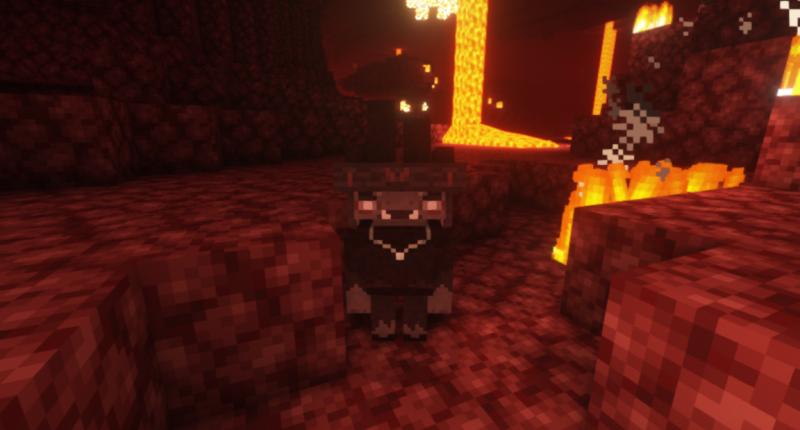 The Netherling in its neutral state. 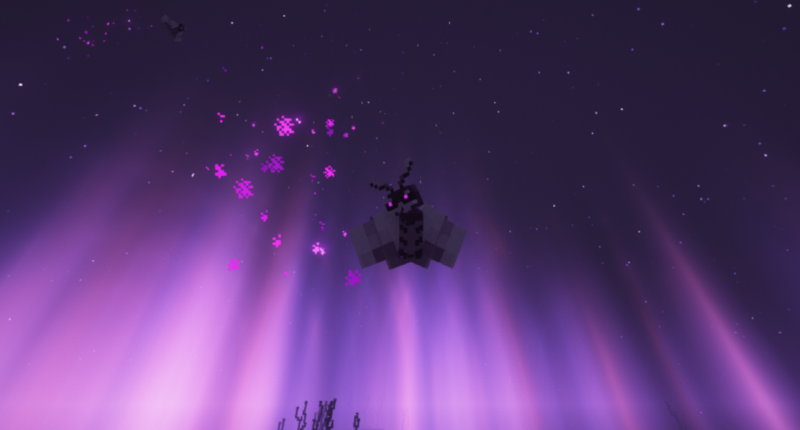 Chorus Moths in The End. 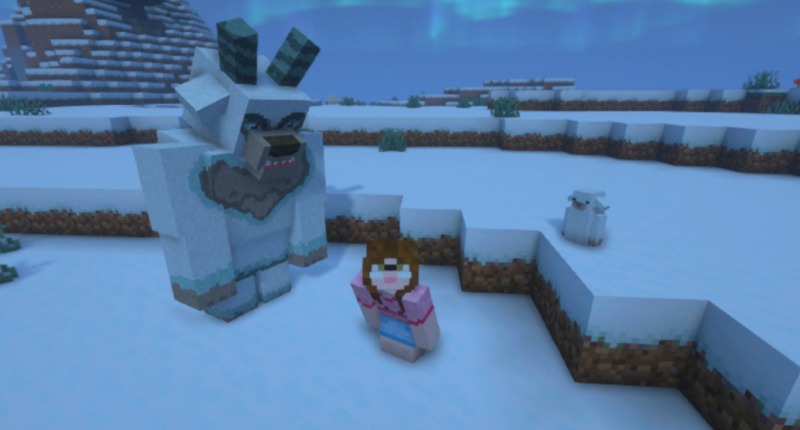 A Yeti and a Furi Cub. 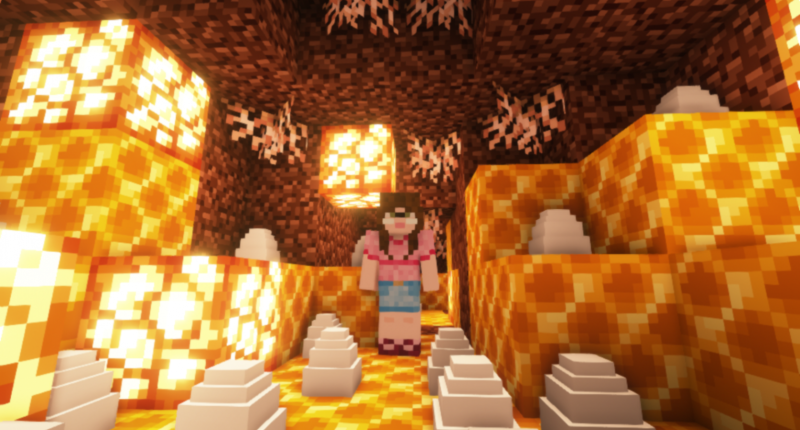 Inside of an Antian nest.

These Hunter-Gatherers live in the Savanna biome, along with their tents and tepees scattered across the land. They live off the land, occasionally hunting animals with their spears and gathering items for themselves. Some say their ancient tribes hold many secrets...

Bungles will open chests, and steal food and treasure to put in their inventory. If there are Bungles around, make sure there's no way for them to get to your treasures! However, once Bungles are slain, they drop all of their stolen goods. So if you do catch one stealing, well... you know what to do.

Bungles are range-attackers, and prefer to use stone spears over hand-to-hand combat. They can be very deadly, and they throw their spears quickly. If you don't have the proper equipment, they can slay you easily. It is best to avoid them early game...

The Bungle Shamans are the leaders of their tribes. They are found within their Tepees, and dwell in the arts of the occult. Instead of regular combat, the Shamans will use different techniques...

Bungle Shamans cast spells when they see you or when they are threatened by another mob. They will glow, along with their target, and they will give them the Essence effect. They will then summon four Sprites to do their bidding.

Sprites are glowing, soul-like creatures that are summoned during a Shaman spell. They fly, phase through blocks, and give you slowness when they attack. They are much like the Evoker's Vex, but will only attack creatures with the Essence effect, or if their owner tells them to. If summoned by a Shaman, the Sprites will have a short life-span, and will starve quickly. They are fast, and are rather tough. It is preferred to avoid the Shaman during early game.

These creatures live in the Jungles and the Badlands. They are rather rare creatures, and are very aggressive! They will attack you on sight and in groups, so beware traveler!

The Antians are very loyal to their colonies. They split their food, and feed each other and their larvae. They eat a variety of meats, and the larvae eat honeycomb. They have their own inventory, and are able to pick up their favorite foods off the ground and store it for later!

Antian Eggs are a new block found inside of Antian nests. They are white and squishy (yuck)! If you obtain two of them, you can hatch them on a honeycomb block and start your own colony! You must have silk touch to obtain an egg.

Nesting Soil is a new block that the Antian Nest is made up of. You can only obtain nesting soil within the nest. It is rich in nutrients, and any plant can sustain and grow on it, even without water. It is perfect to create farms without needing water! And yes, this includes sugar cane!

Psst: There are a total of three chests within the nest, so make sure to dig, dig, dig!

Taming your first Antian requires you to hatch in from an egg, and being near the egg when it hatches. When the baby sees your face, it will become your buddy. If you have already started a colony and your Antians begin breeding, eggs will be tamed by the owner of the Antians.

Breeding two Antians requires them to have food in their inventory, as well as larvae food (honeycomb). They will breed on their own at a random interval. After they breed, your Antian will carry an egg inside of it. It will seek out a free honeycomb block to place it's egg on, so make sure there is a section of honeycomb blocks for you pet Antians to lay their eggs!

The Furis wander within snowy, barren lands. They live in packs, and when a full moon rises, well, I would stay away from them for a while...

If you want your own little Furi buddy, you must tame it as a cub. They will eat sweet berries, but they loooovve milk! Feed a cub a milk bucket, and they'll love you forever!

Adult Furis will transform into a giant monster under the full moon! They are called a Yeti when they transform, and will attack you on sight. They are very powerful. They have lots of health and deal a lot of damage! You'd probably want to avoid them until the sun rises again.

However, if you have tamed one, they will not attack you. In fact, they will defend you from any monster with their powerful blows. Keep them near you throughout the night, and you'll be safe!

The Furis eat many meats to breed, but their favorite are sweet berries!

Muffles are cute little cuddle-buddies! They live within the forests scattered across your world.

Wild Muffles are afraid of you. They will run, and boy are they squirrely! However, babies will love you if you feed them apples or cookies!

Feed them their favorite foods and they will breed! Wild ones are scared of movement however, so make sure to be very still to not startle them!

Fungi are mushroom creatures that reside within Dark Forests and the Mushroom Islands! They have impressive heads!

There are two types of Fungis: red and brown. The two cannot cross breed, but their spores (babies) have a fifty-fifty chance to become either red or brown Fungis. They eat rotten flesh and fermented spider eyes. because, mushrooms. You cannot tame Fungis, but they will follow you if you hold their favorite foods.

Cactis are the dwellers of the desert. They are in the same family as the creepers, but they are not at all like their cousins, so don't worry!

Cactis do not eat anything, because photosynthesis. They will breed on their own during rainy weather, and do not interact with the player. they are simple creatures!

Cacti will stop walking when you are close to them, as they are trying to blend in to their surroundings. However, if they are punched, they will zoom away! The jig is up!

Psst: Bring them into the rain, and see how they will react!

The Grott are stoic, stony creatures that dwell within the mountains. They spawn in mountanous caves as well as on the surface.

The Grott eat an assortment of raw minerals, such as iron, copper, as well as emeralds. They are normally afraid of players, and will run away. But they are greedy and gluttonous, and will happily follow you if you are carrying their iron-rich foods! You cannot tame a Grott, as they have a stone-cold heart. But feeding them food will make them breed. So they'll be your friends, if you have food, that is...

The Netherling are found in... well, I'm sure you know already. The Nether. They are hostile creatures, and their melee attacks will set you on fire! But only for a short amount of time. They are rather rare, and spawn in small groups within the Nether Wastes, Crimson Forests, and Warped Forests.

The Netherling will show they are angry through their faces and sounds. When they go into an angered state, their face will change, like angered wild wolves. They will also make sounds to let you know they don't like you.

When Netherlings are low on health, they will cry and run away from you, becoming sort-of passive. They will avoid any player until they are healed again.

Chorus moths are beautiful insects that dwell in the outskirts of The End, near the Chorus trees. They are mostly a creature to fill The End with more ambience and don't really interact with the player, but if you hold chorus fruit in your hand, they will follow you!

You can also find me on CurseForge: https://www.curseforge.com/minecraft/mc-mods/caities-critters

All these creatures are still under development, so I'll definitely add more character to them and fix possible bugs in future updates!

There is more to come! So stay tuned for more!

This mod implements custom AI for some critters, and unique custom goals!

This is my first ever mod I have published, so let me know of any improvements and suggestions! Thanks!

- Fixed Netherling spawning bug and made them more common

- (Most likely) fixed a fatal bug with a custom goal

-Caitie's Critters version Alpha now up for download! Let me know of any suggestions! :)

What a cute concept, Muffles seem to be so adorable ^^

Thank you! :D I'm excited to see what people think of it! And Muffles are one of my favorites too lol!

Version 1.0 is out, and working on more improvements! Let me know of any suggestions you guys want me to add or update!

Thank you very much! :D

can you upload it to curseforge?

Already did it yesterday, I should put link in description lol
https://www.curseforge.com/minecraft/mc-mods/caities-critters
there u go! Thank you very much for downloading!

Thank you very much! I’m really glad you enjoy it! :D

Hi kitkait, i was wandering how can i make baby models from the mobs you've made , beacause idk how..

Yeah sure! :D
I made the baby mobs through separate models through blockbench, and then I made them two separate entities. if you go into the code editor of the adult entity, under “getBreedOffspring”, change the adult entity to the baby entity. And you have to make a code or procedure where when the baby mob is no longer a child, is despawns and spawns the adult mob with the baby mobs owner and custom name (if it had these)
I hope that helps! :D happy modding!

Great art style.
It just fits in my mcreator modpack!

Thank you very much! I'm glad you like it!

yeah, but can you sent me an image of it?