Infectum is a mod all about infection and monsters. This mod is still in development and some of the items still don't have any uses but in future updates I will give them uses. If you have any suggestions or find any bugs, leave me a comment! :)

The overlord is a big and mean boss, which has a 10% chance of spawning with each astral runestone used. It has 300 health points, up to 30 ranged damage and 9 melee damage, and 5 armor points. It has 3 different attacks.

The hiver and leaper replace the senteniel and reaper. Both are level 4 enemies and will spawn late-game.

These are the items currently in the mod, but more will be added later. The pure shard reduces points by fifty. (+100 points = next phase of infection (+50 points every time you wake up) )

The armor is crafted from infectious hide which is dropped from infectoids. The armor decreases the detection range of all nearby mobs by 30%.

The infected spear has 1.4 attack speed and 18 attack damage. It has 100 durability.

The infected staff is a magic-based weapon. It consumes 1 level of xp per use and creates a blast around the player after 2 seconds of being used.

The infected sword has 0.9 attack speed and deals 24 attack damage. It also has 100 durability.

Phases are advanced through sleeping.

Phase 1: All infectoid eggs will hatch into buzzers.

phase 3: Bloat infectoids, sluggers, and tentacles, along with small pillars of infected blocks will spawn everywhere.

The infection is immediately started when you join the world! The phases will slowly advance as you play minecraft. More about phases later.

The runestone is used to summon the boss, not start the infection. 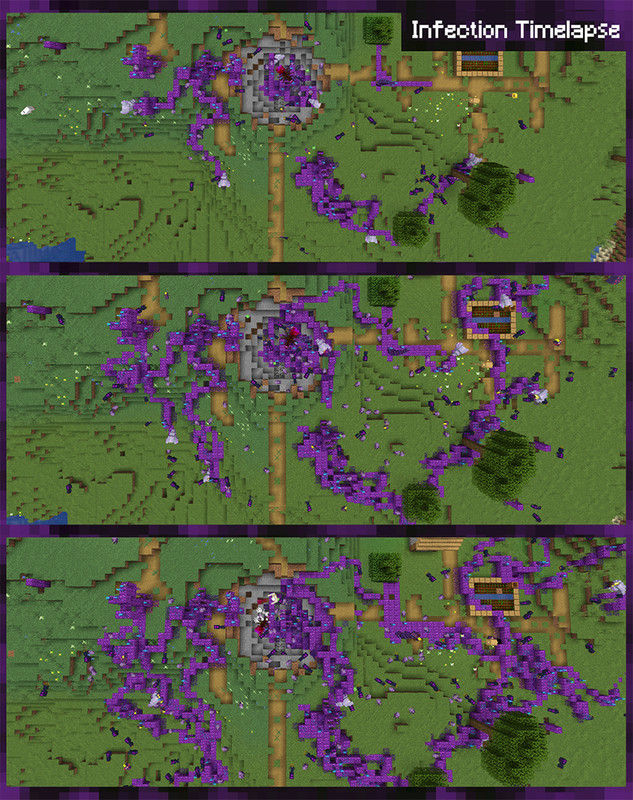 As you can see in these pictures, the infection will spread from the crater where the meteor lands.

These are the three smallest infectoids you will be fighting. The buzzer flies and the bloat infectoid is stronger than the small infectoid. These can evolve.

The slugger is the main enemy spreading the infection. It leaves a trail of infected blocks as it moves. The slugger will also lay eggs which will hatch into 3 buzzers during phase 1. The watcher  watches players and spawns during phase 3. More on phases later.

There is also one other mob called the tentacle, it spreads infection but remains stationary . (sadly I have no picture ;-;)

When a meteor strikes, it will either spawn a bomber, Queen, or a Overlord.

The Queen is a ground-walking, melee mob with 250 health points, deals 8 damage and has 2 armor points. The queen also has permanent regeneration 2.

The bomber is a flying ranged mob, also with 250 health points, deals 5 ranged damage and has 2 armor points. Melee attacks will not work against it so you can only us arrows or the bombs it throws at you. It spits bombs which can be picked up by killing it, but if not killed within 5 seconds will explode. You can throw it back at the bomber when picked up.

First and foremost, may I use this mod in a modpack? :)

And secondly, do the slugs transform blocks from the world into the purple blocks, or do they just build trails of purple blocks on top of the world blocks? The specific gameplay scenario I had in mind for these guys involves a sealed environment with limited space and not many vanilla blocks, so the latter would be better. If you know how to do both, maybe consider making that a configurable option in the cfg.

Sure! You can use this mod in a modpack! For the slug question, they convert blocks beneath them to infected blocks.

Can you addon mcpe Mobil