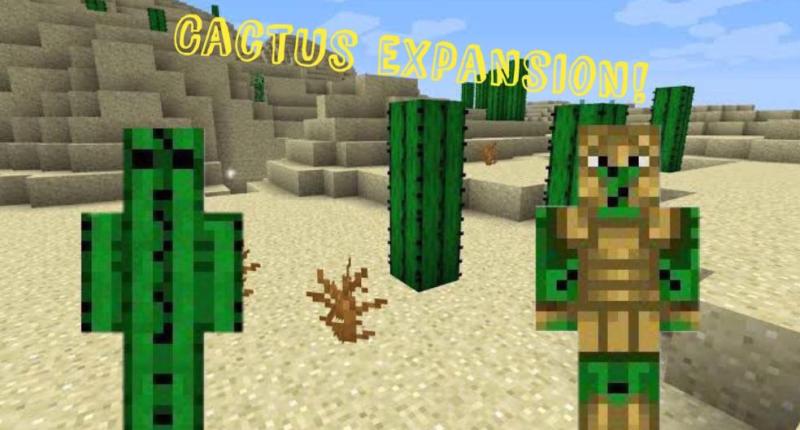 Displays the two new mobs in this mod.

Thank you for being interested in the cactus expansion! This is my first time making a mod and my first time using the MCreator tool. Note this mod is still in heavy testing and much larger things will be added in future!

The cactus sword is a great sword that is crafted with one stick at the bottom, two cactus above, and a cactus prickle on either side of the cactus. It has an attack damage of 9.5 making it worse than an iron sword, but better than a stone one. It has a durability less than gold and it can also be obtained by killing the cactus soldier.

The cactus bite is an easy to obtain, low saturation food source. It is crafted by putting one cactus in the craft slot and it gives 4 cactus bites. Each cactus bite fills up 1 hunger (half a food bar) and can also be obtained by killing a cactus boi.

Cactus prickles are obtained by killing cactus soldiers, its only use currently is to craft the cactus sword.

Cactus boi is a common found mob in the desert. It is usually passive but gets angry when attacked and also calls over its friends to help (similar to a zombie pigman or dog). It does damage to you when you attack it kinda like the thorns enchantment. They drop cactus bites as mentioned before and rarely cactus

The Cactus soldier is a rarely found mob in the desert. It is always aggressive and deals large amounts of damage. Like the cactus soldier it deals damage to you when attacked but not as much (this is made up for in its large damage and health) The cactus soldier has 3 armor points meaning it will resist some damage. They drop cactus prickles and have a rare chance of dropping a cactus sword.

minor bug fixes. Fixed bug where textures where upside down on mobs.

Added feature where cactus soldier leaps towards you when attacking.

Out of alpha and in beta.

Nice first mod. Feedback: please add more stuff before releasing it next time. And the cactus sword should be more powerful. You should consider to add a cactus ore and cactus tools.

Hey, thanks for the comment! I noticed sometimes the texture where flipped for the mobs so i just released my first patch. also notice it is in beta and i am already working a new cactus tool that will be released soon. :)

But this is nice for a first mod. I can see you worked hard on it

I think the Cactus Sword is fine actually. If you want to improve it, maybe you could make it sometimes stun enemies (apply high levels of slowness and weakness for very little time)

the cactus sword is sort of hard to get, but its durability should improve

Good mod :)
I think you should add more images