MCreator 1.7.8 - The first step towards MCreator 2

MCreator 1.7.8 is one of the biggest updates in the history of MCreator in terms of the amount of the code changed. It is also the first step towards MCreator 2. Read more in the article.

First two important improvements in this update are sound and localization browsers. Now you can remove unused sounds, edit localizations and add new languages to your mod. You can easily map translations from inside MCreator with a table of translations that does all the hard work for you.

In the gif above, you can see all the new menus and the features they provide. Why not install 1.7.8 and try it yourself?

The next important change in this version is that we have removed the legacy UI option in favor of new cross-platform UI that works the same on all platforms. We have generalized the fonts and now use Roboto for most of the UI components. This UI is independent of the platform and has universal looking components so there will be no more overlapping of components on any OS.

There have been some other cross-platform improvements too such as support for Minecraft Source code browser that now works on Linux and macOS too.

Some of the important bug fixes are:

There have also been many other small bug fixes that make the experience of using MCreator better.

Another notable change is improved preferences dialog with many new options. Preferences are now stored in user's home folder in .mcreator folder and will be used across all installed versions from now on, so you won't need to set them for each version and log in every time you install a new version.

As you can see on the screen recording above, many new preferences options were added. The system for adding new elements is very easy so expect us to add even more options in the future.

Other new features include an option to set multiple spawn biomes for custom mobs, improved GUI editor, updated Minecraft Forge, improved version update message with skip option, added MCreator.bat file for Windows users in case if EXE launcher doesn't work and for debugging and many other improvements. You can see the full list of them in the changelog.

The first stage of MCreator 2 has started with this update. Many code changes have been made in order to make the move to MCreator 2 possible in the future. 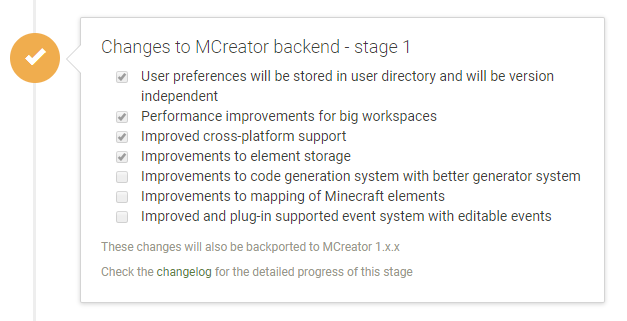 You can see the list of changes planned for MCreator 2 that have been covered with this update. Note that there were also many other code changes that are not directly visible but will improve MCreator in the future.

If you haven't read it yet, check the blog post on Pylo about MCreator 2 to learn more about the upcoming changes. Stay tuned as we have some quite nice surprises ready for you in the future including one of the most requested features and something that is lacking in the Minecraft community right now and we have our own solution for this planned. Keep a track at our social networks including Facebook, Twitter, and Instagram for more details.

Leave a comment below and tell us what is your favorite feature in MCreator 1.7.8 and what surprise you think we have for the near future?

And when will it come out?

You can download it already. MCreator 2, on the other hand, has not a complete estimate yet but it definitely won't be there until the last quarter of this year.

Looks great! Also, may I ask if there is an option to add custom strings to the localization file?

Not yet, but this is a nice idea. I will implement this in next update as it might be helpful for more advanced uses.

WOW! It hasn't even been that long since MCreator 1.7.7

Hope to see MCreator 2 with all of it's new features. :D

Make sure to check this version too as it is also packed with many new features.

Awesome
I thought it was only a bug fixing update. You are releasing awesome updates in a very short time!

All is well, but the program is very buggy, the previous version was better.
In this version, my mouse seems to float.

Could you provide a screen recording of this issue and post it to our issue tracker?

Thanks. I have asked you for more details on the issue.

Great update! I like the new language editor as now I can make mods in my home language!

Thanks. I hope you will make a good use out of it.

I know that before the latest Mcreator updates the directory of blocks and items textures was user\textures but now why is it "forge\src\main\resources\assets\minecraft\textures?

Because there were two duplicate locations before, but now only one is used to reduce space usage. There will be some more changes on this area in the future as we are slowly moving towards MCreator 2 workspace format which will allow users to have multiple workspaces in different folders on the computer.

Korean Texts Are Not Working

You might need to manually set the encoding of the land file after you export the mod.

What's up with the item/block editor?

Sorry, but I didn't quite catch what you meant by item/block editor?

What I meant to say was that how come the item/block editor has this thing where if a texture is on the editor, when you use any pencil tool, it goes over that texture instead of changing the texture.

Are we talking about the integrated image editor? If this is the case, this tool needs a major rewrite in the near future.