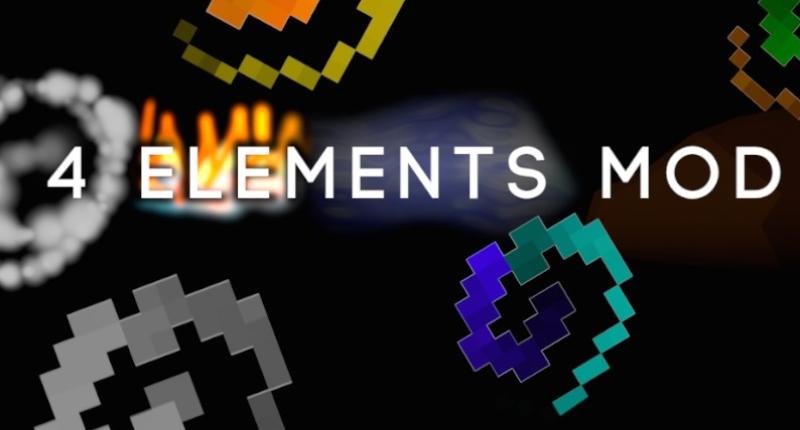 Hello, all! Welcome to the 4(?) Elements Mod. My mods KEEP getting deleted, but they all follow the guidelines and none of them break any rules or are inappropriate. MCreator team, what the heck? That's not fair. Why the heck should my mods be deleted every day? Yes, I was on yesterday (according to the time I wrote this part), and it was here. What the heck?!

Important Announcements and Other Things (Urgent ones Bolded):

-I TAKE REQUESTS! SUGGEST AN ELEMENT AND A CRAFTING RECIPE IN THE COMMENTS. AS LONG AS IT DOESN'T COINCIDE WITH ANY CURRENT CRAFTING RECIPES, I'LL PROBABLY TAKE IT (AND YOU WILL GET CREDIT)! I hope to make the development of this mod interactive. :)

-I am putting out a special offer right now: I'm pretty good at MCreator and sometimes even editing the raw code of the stuff. If you need any help with a mod of yours, just make an honest mod review of this mod on youtube and put a link in its description to link it back here. Link the video in the comments here and I'll put the first one as the official mod review. However, this offer still stands for any that follow, just link the video in the comments and I will help you with whatever mod you need help with, as well as I can. :)

-I NEED HELP WITH TWO THINGS IN THIS MOD! For the essence of Enderman, I set it to summon entity with ID 58 (Enderman) one block above the block you right click on. It spawns, but gravity doesn't affect it, it doesn't move and won't attack you. It stays in an infinite loop of its standing animation. I tried execute command on rightclick on block and put "summon Enderman" (because it says command without the /) and it says you do not have permissions. I turned on cheats via hosting the world on LAN and it still didn't work. Then, I typed /summon Enderman in the chat and an Enderman appeared. Also, the Essence Creature crashes the game if it's attacked by a zombie. Not sure about any other mobs, doesn't crash when a player attacks it though. It has the AI type of an Iron Golem. If you help me in the comments and it works, you'll get a dedication here on the mod page! Thanks!

Anywho, this mod is about the four elements (water, earth, fire, air) and what they can do together. Each of them can be captured within a physical, tangible essence. They all have different effects when right-clicked. Here are the crafting recipes.

Essence of Air, which consumes feathers in your inventory for a high-knockback blast: Essence of Fire, which when right-clicked on a block sets it on fire until the block is destroyed (can also be used as fuel with power of 8,000): Essence of Water, which when right-clicked turns any block into water (When done to furnaces, chests, crafting tables, etc., you can still use it as though it's in the water. Contents stay the same.): Essence of Earth, which turns any block into a grass block (has same cool side-effect as essence of water): Essence of Ender, which consumes an Ender Pearl to throw it a lot farther than a player alone could: Essence of Whitehot, which when right-clicked on a block strikes lightning and creates a 3x3x1 square of fire where struck (can be used as fuel with power of 20,000): Essence of Sustenece, which when right-clicked has a 1-in-5 chance to give you a melon block: Essence of Poison, which when right-clicked consumes a fermented spider eye and shoots it, poisons any player it hits: Essence of Lava, which when right-clicked on a block replaces it with a block of lava (has same cool side-effect as essence of water) (can be used as fuel with power of 16,000): Essence of Growth, which on right-click on block turns the block into a grass block with wheat growing on it (should have same cool side-effect as essence of water): Essence of Nether, which on right-click turns any block into nether quartz ore (should have same cool side-effect as essence of water): Essence of Enderman, which on right-click on block spawns an Enderman: Essence of Hemlock, which consumes poisonous potatoes (which now have a shapeless crafting recipe of one potato and one essence of poison) to deal some good damage to anything it hits and poison any players it hits for quite a long time: Essence of Telepoison, which consumes and shoots a raw spider eye which teleports you when it hits a player (who is then poisoned) and teleports you to where it hits (deals a very small duration of poison to the user when used): Compressed Aether Ingot (can be done on top or bottom): Aether and Steel, to light the Aether Portal (also shown): Standing on the Aether Leakage gives you Speed IV. Aetherite Ore is only mineable by means of diamond pickaxe and drops two Aetherite. If you end up using a silk touch pickaxe, you can smelt it into one Aetherite. Fanmade Essences (You too could have one! Look at the top of the description and follow the directions.): RedMenis' Essence of Power, which has 10,000 uses of 10 seconds of strength, absorption, speed, and jump boost all base level one: I hope you all enjoy this mod! I have and will continue to work hard on it. I hope this makes Minecraft a bit more interesting.

Copyright Notice: All information and ideas in this modification to the game Minecraft (which in and of itself is copyrighted and trademarked by Mojang) are original to the creator, the owner of the Mr_Alpha profile on this website, who prefers to remain anonymous. This add-on to Minecraft is protected under general United States copyright and fraud laws.

You may use this mod in a video or modpack as long as you put a link in its description to link consumers back here.

You may not edit the source code in any way or claim this modification as your own.

Really nice mod, but please change the mod picture to your own picutre (like screenshot of mod), otherwise we will have to take it down as the picture of four elements is not yours.

@#1 Will do, thanks. I see it has been done already for a temporary image?

@#1.1 Really nice! I love this element thing!
But I'd like to know how did you crate the poison one? or better how did you let the "projectile" to set poison status on the entity it hits? and it works even for swords?
I tried a ton of codes (hitEntity etc.) but nothing works T_T

@#1.1.2 Yeah, see poison is weird. I think it's add potion effect, ID is 19. Check in case I'm wrong. The only thing is, poison only works on players. So with the poison essence, it's when arrow hits entity add potion effect poison (19 or something) but it just does a tick or two of small damage to mobs. Try getting a few stacks of fermented spider eyes and shoot them straight upward in survival. Let me know if it works. It didn't work very well for me...

@#1.1.2.1 I see... I think there's something different in class with MCreator that's why normal codes do not work :c
And Yeah it's 19
Did you wrrite all the codes by yourself (since something inside this mod it's not possible to create with only MCreator :P)?

@#2 I don't think I'll be doing one for each element, but eventually I'll make Essence of Æther and you'll be able to do a bunch of fun stuff with that. :)

Yo Bro No Affence You Icon Looks Dull Here Take a Look at This http://imgur.com/jOv0inI