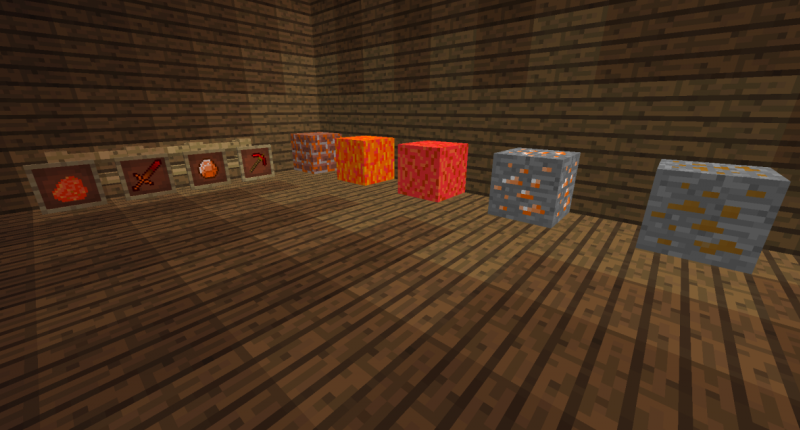 This Mod Is my first ever mod i have created so it may not be the best but i had fun making it and testing it out. when i was testing it out it all went swell except for the lava Core which is a source to use in furnaces (Just Like Coal but its lava) and it sometimes crashed when i opened up the furnace so i hope it works for you and you dont have any problems. P.S. The Lava Pickaxe is not as good as it sounds.

Things I added In

-1: Lava Token (Used to craft some items and blocks) (Obtained from Lava Ore)

-2: Lava Block (Created With 9 Lava Tokens in a Crafting Table (How you would craft a diamond block))

-3: Hot Block (Created Just like a lava block but in the crafting table you use 9 lava blocks)

-4: Lava Pickaxe (Created By how you would create any pickaxe but you would use Lava Tokens And you just use sticks.)

-5: Lava Sword (Created like any sword but with lava tokens)

-6: Lava Brick (Put the brick in the middle of the crafting table and surround it with Lava tokens)

-7: Lava Ore (Found down in the world Near Bedrock usually)

-8: Core Ore (Found more of close to the top of the world)

-9: Lava Core (Used For Fuel and Obtained From Core Ore.)

Not a big mod but should be added to a modpack, it has good decoration because good textures seems fun, i'm gonna try it and give feedback

@#1 like i said in the description, this is my first mod. I will be creating as many mods as i can and maybe i will be able to mash them all together one day (probs in like a month or longer). But thanks for telling me what you think! cant wait for the feedback! mistakes are stepping stones to success.