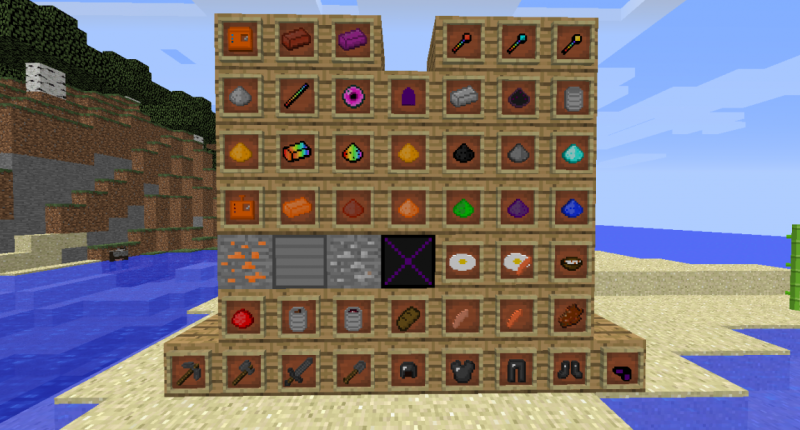 Hello everyone! Before you read on, I just want to note that this mod is inspired by RaolCraft and if RaolCraft did not exist neither would this mod. Some of the ideas for this mod belong to RaolTheBest, so be sure to check out RaolCraft 3 at https://mcreator.pylo.co/modification/31740/raolcraft-3-reborn-fusion .

Note: This mod is now discontinued. I've decided that I've done enough with this mod, I'm already running out of ideas. However, I will be working on a bigger mod in the meantime, which should be released at some point. This mod was just kind of a test, me coming back to MCreator and seeing how things go with a mod like this. The next mod I make will be similar, but way bigger...

Balanced wands - Mana orbs can now be crafted, which are required to use a wand and are consumed on use.

Shadow tools: best tools in the game, but break quickly

Coins made of bronze - Can be crafted into emeralds

Feel free to use this in a modpack, as the mod states who made it in the mod menu, so you don't need to give credit.

Fixed a bug where Solidifiers were stackable

Added a new dimension: the Undershade; accessed by building a portal of Nightmare Blocks and lighting it with a Nightmare Stick

Added Tin Cans, can be used to can Rotten Flesh and Spider Eyes so they are safely edible

1.4: 1.4 - The Nightmare Update II
Note that this update is mainly to fix a few bugs and glitches in the mod, but I also added some new stuff to the Undershade!

Fixed a load of bugs

Balanced wands - Mana orbs can now be crafted, which are required to use a wand and are consumed on use.

Shadow tools: best tools in the game, but break quickly

Coins made of bronze - Can be crafted into emeralds

Inspired by a whole plethora of mods (including RaolCraft, as said), GerbilCraft brings you a good experience no matter what your play style. Below you can find all the things added in this mod.

Here are some of the items in the mod:

Copper - Used to create the disintegrator and the solidifier

Disintegrator - Used to turn ingots and minerals into dust

Nightmare - Crafted from coal dust and obsidian dust, used to access the Undershade

Wands: (Wands are special tools, when right-clicked they perform an action.)

Snow - Spawns a block of snow

Leave your thoughts and suggestions down below!

Oh my god, thank you for 80 downloads in the first day!

Amazing mod! Can't wait to try it out!

You can take inspiration from my mod as you want.

Thanks Raol, I really appreciate the inspiration. :)