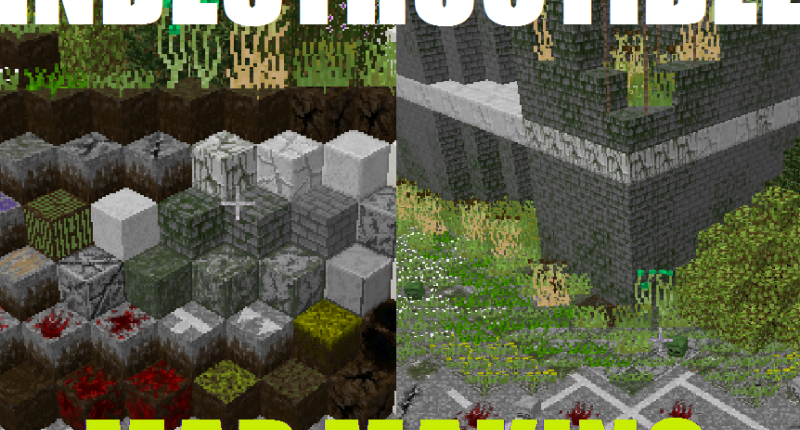 Pyro's Indestructible Map Making mod contains 100+ unbreakable, explosive resistant blocks and plants. The plants can be placed on any kind of block; including stone, wood, water and everything else. Dirt is not required. The blocks include: roads and painted roads, concrete, bricks, grates, secret passages, tiles, sidewalks, windows (W.I.P.), trees, and  much more. I also made mossy and/or broken versions of the most of them. It also contains 4 new types of grass, 3 new flowers, reeds and bushes. There are currently 16 new types of zombies, with there own new weapons. The current zombies are level 1,2,3,4, like the weapons they are holding. When killed, zombies drop their weapons very often. The weapons are upgradible by putting the weapon in the middle of the crafting table and put the upgrader stone in the spot on top of the tool. Upgrader stones are rarely dropped by the new zombie types.

THIS MOD CAN BE USED FOR:

- Maps where adventure mode is unusable, like maps which mining is a part of the game, or luckyblocks

- Parkour maps where in you're not allowed to cheat

this mod is far from finished and it is not what it is supposed to be.

Could you upload a Jar file aswell? (I have no idea how to install a mod using zip)

@#2 it is the same process of a jar. You only need to copy the zip file into the mods folder into your minecraft directory (by default it is .minecraft )

(or just minecraft if you are on mac)

You should add tools that can break certain blocks ex:jackhammer