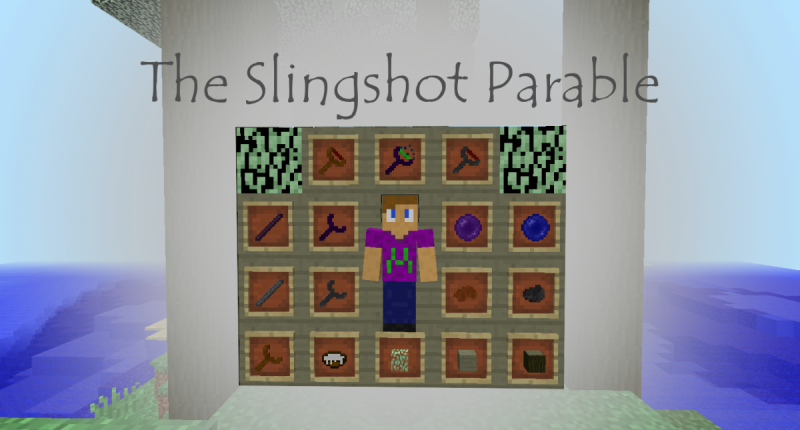 Hello, all you wonderful people! Today I have for you something very special: Slingshots! Before we get into it...

-The inventory texture of the armor is the error purple/black squares. Hmm... The armor itself looks fine on the player though :D

-The Wither effect icon doesn't go away from after you get shot by the glass slingshot. It doesn't affect you anymore, but it still says it does. This might be an MCreator issue, not a mod issue.

-THERE ARE SCREENSHOTS OF RECIPES AND METHODS AT THE FOLLOWING URL(s): (imgur isn't letting me put one pic at a time in here, so...)

-There will be more slingshots to come, with more power, more range, different ammo and more difficulty to obtain! Don't worry.

-I do take recommendations! Most of the time. Don't make them inappropriate, but other than that no idea is a bad idea. I will respond to your comment if I decide to incorporate your idea into the mod and give you credit inside the mod with your MCreator username! Keep those ideas flowing!

-I would highly appreciate a mod showcase/review video. Let me know if you're interested in doing that!

v1.2: Cobalt and Tungsten introduced, along with their armor, tools and of course slingshots

v1.3: Uranium and its slingshot/ammo introduced

And without further ado...

Every slingshot starts out as a frame and a rubber band. Minecraft has the materials for a frame, but what about rubber? I give you the Rubber Biome! In real life, rubber comes from the sap of a certain kind of tree. In Minecraft, it does too! Once you find a Rubber Biome (characterized by ridiculously tall trees with few leaves at the top, I mean in real life apparently the trees get about 30m in height, so for us Americans that's like 97 feet and some change), just right click one of the tree trunks with a bowl and voila! Tree sap. Well, 1/5 of the time, anyway. Some days trees just don't feel fruitful, ok?

By the way, it turns out wood from rubber trees is soft and super useless, so you can make planks but anything else would break so fast that it wasn't worth putting in the mod. Have fun without rubberwood tools and sticks. You can do it! I believe in you!

Once you have the good ol' bowl of good ol' sap, cook it up in a furnace for one piece of rubber. Yay!

Hey, guess what? You ever heard of a thing called Tungsten? No? Ok... Thought I was being sciencey and cool... Anyway, you can now find Tungsten Ore! As usual, you mine it and then smelt it to get Tungsten Ingots. Along with that is every armor and tool (and sword) that would come with a new ore! It's a little better than iron and a little worse than gold (other than durability, gold gets trumped in that respect by everything).

There's also Cobalt Ore now, and its appropriate ingots, armor, tools and sword! All the crafting recipes for vanilla items made of the new ores are exactly the same.

Uranium-235 Ore is a thing now. You get Uranium-235 Nuggets when you mine it. However, it's not stable enough for armor and would cause too much radiation damage as a tool or block, but a slingshot is small enough that it won't do much to you. ;)

All frames are in the same basic shape in the crafting table unless otherwise stated: one [material] in each of the top two corners, one in the center and one in the bottom middle. It should look like a capital Y. If there is any confusion, check the link(s) above for screenshots of crafting recipes and methods.

-Stone Slingshot Base: Use [stone rods], which are crafted with 3 cobblestone in a vertical line in the crafting table.

-Iron Slingshot Base: Use [iron rods], which are crafted the same way as cobblestone rods but with iron ingots.

-Gold Slingshot Base: Use [gold rods], which are crafted the same way as cobblestone rods but with gold ingots.

-Diamond Slingshot Base: Use [gold rods], which are crafted the same way as cobblestone rods but with diamonds.

-Glass Slingshot Base: Use [glass rods], which are crafted the same way as cobblestone rods but with glass.

-Obsidian Slingshot Base: Use [obsidian rods], which are crafted the same way as cobblestone rods but with obsidian.

-Tungsten Slingshot Base: Use [tungsten rods], which are crafted the same way as cobblestone rods but with tungsten ingots.

-Cobalt Slingshot Base: Use [cobalt rods], which are crafted the same way as cobblestone rods but with cobalt ingots.

-Unstable Uranium-234 Slingshot Base: Use [unstable uranium-234 rods]. These are crafted by smelting [uranium-235 rods], which are made the same way as cobblestone rods but with uranium nuggets.

-Quantum Slingshot: One Obsidian Slingshot Base in the center of the crafting table, an ender pearl on the left and right of it, a slime ball on top and a blaze powder beneath. Nothing in the corners. Shoots REAAAAAAAALLY FAR. Like really far. Seriously.

Again, any confusion can be consulted through the link(s) above.

-Glass Shard: Shapeless recipe. One Glass equals nine Glass Shards, but it doesn't work in reverse so be careful! Ammo for: Glass Slingshot; Special Effects: A short period of low-level Wither effect is inflicted on any player it hits (cuz glass hurts for a while after you get cut by it).

-Quantum Pearl: To start, put an Ender Pearl in the center of a crafting table. Put blaze powder in all four corners and redstone in the remaining slots. That gives you one Stimulated Ender Pearl. Then, put the Stimulated Ender Pearl in the center of the crafting table. Put one Magma Cream in each corner and Lapis Lazuli in the remaining slots to get ONE (too much?) Quantum Pearl. Ammo for: Quantum Slingshot; Special Effects: Teleports you to the impact location, including if that is on top of an entity. Still does damage to the entity.

Last chance to check the screenshots if you're confused. (Not really, but last warning I'm giving you.)

UPCOMING SLINGSHOTS AND OTHER STUFF

Thanks a lot for checking out my newest mod! Be sure to check out my other (and older) ones, too.

Copyright Notice: All information and ideas in this modification to the game Minecraft (which in and of itself is copyrighted and trademarked by Mojang/Microsoft) are original to the creator, the owner of the Mr_Alpha profile on this website, who prefers to remain anonymous. This add-on to Minecraft is protected under general United States copyright and fraud laws. All Rights Reserved.

You may use this mod in a video or modpack as long as you put a link in its description to link consumers back here.

You may not edit the source code in any way or claim this modification as your own.

This mod is really cool!
The description is very detailed and accurated and the ideas are nice!
For the trasparency bug, just click the box "has trasparency" and put cutout

@#1 Ah! Ok, I had the transparency button clicked, I just had it on solid. Wasn't sure which one it was. Thanks a lot for the praise and the help!

To fix the purple/black squares in inv., just re-select the textures in MCreator.

Hi I would be interested in doing a showcase video if you want.

@#4 Yeah, I'd love that! When could you do it? Do you need any extra information? I think I could give you a seed that has a rubber biome near the spawn point if you want. It might still work with the updated version.

@#4.1 I could do it anytime! The seed would help. No extra info needed. Should I upload it to my channel or just send it to you?

Ok it might take a little longer than expected my capture card is acting up i'll try to start now though.

Hey, do you still plan to do the review? It's fine if you don't, but you never said anything.