Oddities-The Wonders of the World 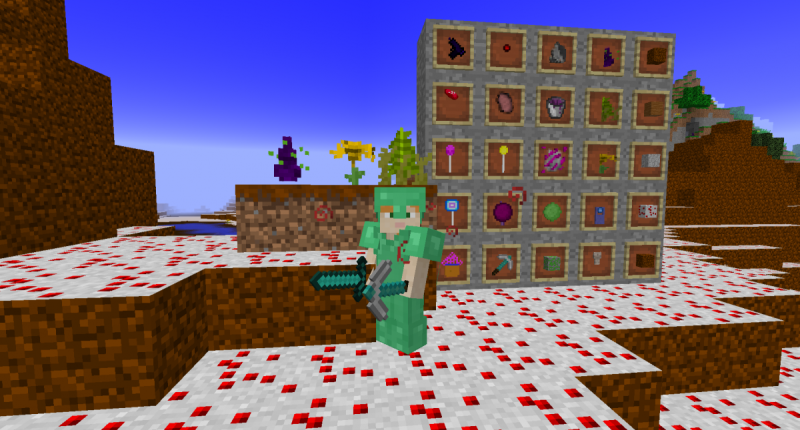 The Items And Things 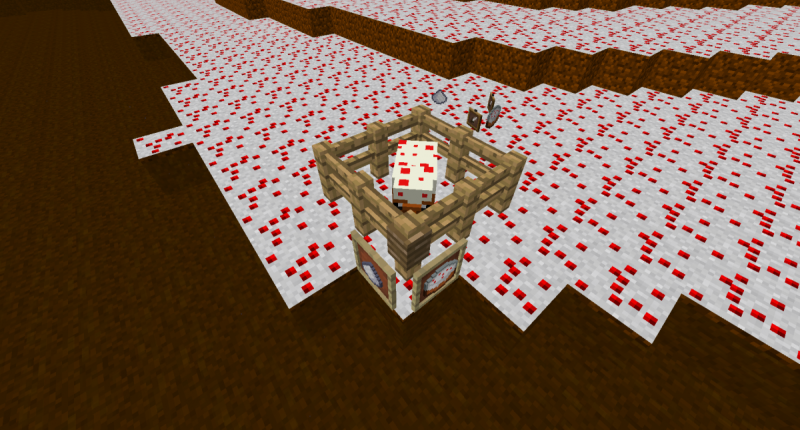 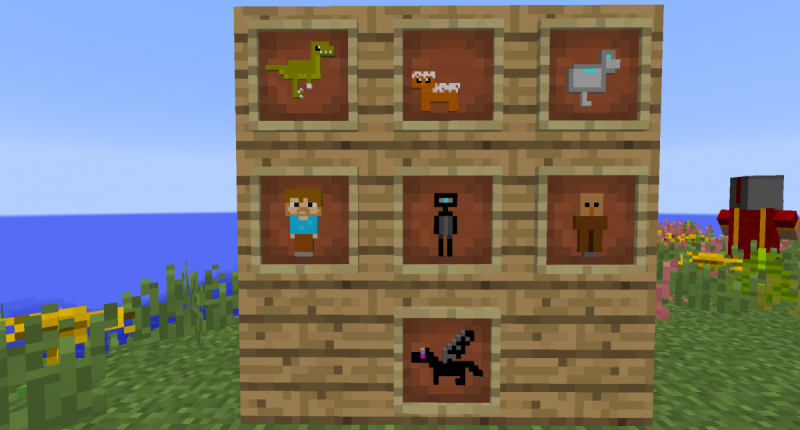 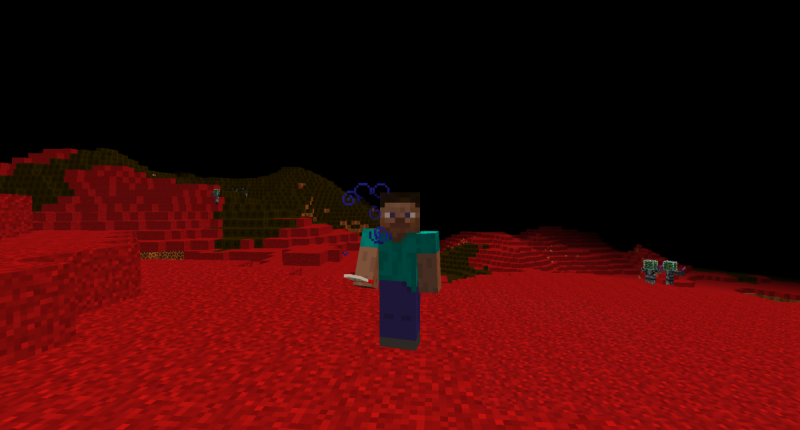 One of the New worlds

This is the first ever Minecraft mod I've ever made. Just enjoy.

New Update! The first phase is out now!

Have you ever wanted a little something extra?

Just something to spice up your world? maybe dinosaurs, or evil robots? Or how about a biome made entirely out of cake? If so, make sure to get this mod! I have created a multitude of items. Such examples are lollipops, which come in differing flavors with different powers! There is a new mini boss, and an odd Rubber Ducky...  Two new biomes are made, one being a "Prehistoric Kingdom", and the other being a massive land of cake! Don't eat it all! It'll give you a stomach-ache!

Mobs, blocks, plants, biomes and more have been added to Minecraft in this mod. You need to find the things that are references, and just explore! Is that a dinosaur? or just a glitched out chicken? A robot has come to ruin your day, so use a gun in defense! The possibilities are, literally, ENDLESS! I just hope you don't run into Gabby, the evil ducky! She is just a little crazy!

​​​​​​The hardest part about the mod is that the creatures are either very kind of malicious beasts. There are also plants that  add both beauty And new food to your worlds. There are many foods, and you can also make a satellite phone and then hear a creepy message...

And that's not all! Robots from another world have descended to ours, and want to mine up a strange and powerful new ore! And they have friends! The Nether is a tiny bit more dangerous! And you can mine the "rare" new ore with an OP pick-ax! Please do enjoy this little Minecraft mod!

This is the first update. Do remember, this mod is constantly being updated, mostly on Saturdays Pacific Time!

Feel free to find and add the things to the wiki!

P.S. Use the seed "The Things Like Chickens!" to get a fun little starrt to your world!

To get to the Fire Planet, build a Nether Portal with iron and use a Red Rocket.

To get to the Ice Planet, build a Packed Ice Nether portal and use a Frozen Rocket

Cakelands: A land of cake, with Cake Piggies spawning everywhere.

Teraa: A lost world, with Dinosaurs and Aurochs' spawning in massive herds

FireTerrain: An unstable biome. Magma flows up in massive lakes, with Mars Sand making up the rest of the planet.

FlamePatch: An area made of netherrack and lava. Robots and the Aliens live here.

IcyPeaks: A mountainous terrain filled with ice and snow. The trees have frozen entirely, and many icy critters spawn here.

Firey Planet: This is a land much like the Nether, but is a whole other planet. Robots and all aliens live here. The planet is very unstable, and no food is here. This planet is near it's end.

Ice Planet: A global Ice Age has swept across this planet! The Polar Bears, Strays, Snow Golems are the only residents. The Frozen Steves are all of the dead peoples that lived there. The environment is also very hostile here.

Prismarine Pickaxe: A pickaxe made from rare materials under the sea and in the Nether. It is also better than a diamond pick by almost three times!

Blaster: A useful ranged tool. You can get an achievement for using one. It does need lots of metals, though.

Cucumber Sword: Think it's flimsy? Oh, NO! it does six hearts of damage, and is made from cucumbers. So, not so bad afterall, right?

Criminunum: Made from the Criminunum ore. The power is always a good thing, but the radioactivity makes one nauseous as well.

Midnight: Made from Midnight stones. It gives one Night Vision, too.

Criminunum: It is from outer space. Quite a common ore.

Midnight: A rarer ore. It can be found more commonly near the surface.

Umbrella Flower: Just for decoration. No purpose at the moment.

Midnight Shade: You get powerful Shadeberries from this plant. However, its sharp thorns can give the Wither effect.

Lollipops: The two flavors give special powers. These pops are very useful, too.

Cheese: Easy to make, but doesn't give much health back.

Essence O' Cake: Drops from Cake Piggies. It is a very good food.

Pizza: A great food! Made from bread, cheese, and tomatoes, it gives health back and makes one stronger.

Cucumbers: Made from putting melons with lime dye together. Good to make the sword.

Tomatoes: They have a strange face from the spots they have. They are made from apples and red dye.

Ender Acid: A nasty killer. What goes in, never goes out...

Cake Grass: Makes up the groud of cake biomes.

Cake Dough: Makes up the underground of cake biomes.

There are more, yet unobtainable ones.

Cake Piggy: An adorable little critter. Petting it gives you an achievement!

Robot Miner: A hostile robot that blasts you to bits. It uses a pickaxe to mine up Criminunum ore.

Robo-Chicken: A peaceful little cyborg critter. It drops scraps of its body.

Fire Demon: A terrible beast that shoots fireballs at you.

Mulg: Loves cookies, and is bred by them. They bluff you when they are hurt.

Dinosaur: Hisses and growls. Drops a meat and is bred with the raw Mutton. Found in jungle and Teraa biomes.

Aurochs: Lives in huge herds in the plains and Teraa biomes. Will bluff you when attacked.

Lions: Looks impressive on a huge rock overlooking the savanna. Roars, lives in savannas in families, and drops leather. Can be bred with raw meat.

Evil Wizard: A mini-boss. He really doesn't want to be a bad guy, though. His mum made him do it. He cries when he is hurt, making everyone feel bad.

Frozen Steve: A frozen person, and they could never escape the cold. Their noises are their wails, muffled by the ice.

Doom Beast: The mother of the Evil Wizard. She is... a rubber ducky? She is a very evil creature!

Mob 0: The Steve mob from the Indev versions, Mob 0 has been banished to the Nether. It kills players and eats their flesh!

Adventurer: An oblivious mob, fighting zombies. It also drops its treasures it has found. Bred with Steak.

Knight: Also wanders the world, not doing anything.

Ninja: With their elytra and sword, they will try to attack the player (currently broken, will be fixed).

End Geode: From the End Dimension. No real use.

Phone: Used to get an achievment by making a call.

The first Rather Odd feature is going to be made today! Introducing, the Mulg! It is a kooky mob that loves sweets and will attack you to get them! Maybe you can use this to your advantage, and tame the creature...

Looks like our mods are constantly contending for recent modifications somehow. XD
Maybe you should have the icing on the cake drip over the edges, like grass or something. IDK.

Oh, I didn't see that was happening. XD
The side texture was just testing, I will change it soon. ;)

P.S. Thank you so much for pointing that out! It honestly looks weird!

It is fixed now, and will be released in the Rather Odd Update. 😸

Thanks! By the way, what do you guys want to see in the mod?

Did you get the name from mine?

Nope. I was going to go for "A Lil' Bit O' Everything: An Odyssey of Oddity", but I had a feeling someone had already used it. Also, the first name was a bit of a mouthful.

What do you guys want the mod to add? Give me some feedback and suggestions.