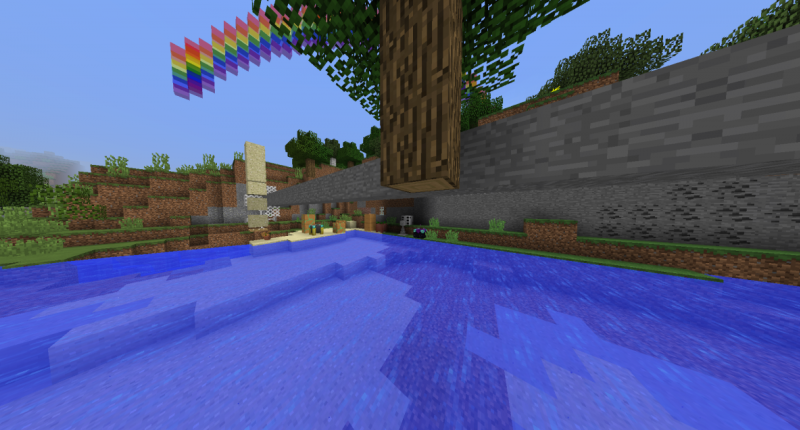 Some of the stuff in the mod

WARNING: I DID NOT KNOW THAT THE SECRET ROOMS MOD HAD GHOST BLOCKS SINCE 2015, I AM SORRY. if there is any other blocks that other mods have, tell me.

INSTALL IS UNIQUE, THE REAL MOD IS INSIDE THE ZIP FILE. I made ruins mod support in the zip file too. I am considering resource packs for the mod too. also I hope I am not breaking any rules with the extra stuff...
-=-  Sifter  -=-
A sifter sifts through blocks to obtain better items from them. Just simply place a block above it, and it will pop out items on occasion. However it only sifts particular blocks.
-=-  Capsules  -=-
Mob capsules will spawn a few mobs on use (right click)
Explosive capsules explode on right click
Grim capsules kill you on right click
Tree capsules spawn trees in you on right click
-=-  Ghost Blocks  -=-
Ghost Blocks look like normal blocks. They also behave simularly, However you can pass through them when they are given a redstone signal.
-=-  Guns  -=-
Ranged spawner will spawn a few mobs where it hits when you shoot. Uses mob capsules as ammo.
Tree guns shoot out trees. Uses tree capsules as ammo.
Rainbow guns shoot out rainbows, and are very fun! Uses dye as ammo
-=-  Ender Point  -=-
(Copyright issues not intended, Ender Point 50% (or more) belongs to Jragon014, Link to logdotzip's video: https://www.youtube.com/watch?v=qyAJwkTe9kY)
if you right click, activate redstone, or stand on ender point, then it will set your spawn and spam chat.
-=-  Compressed Stuff  -=-
Craft with 9 arrows, to get a quiver, then craft with 9 quivers to get a golden quiver. You can also undo the process by placing a quiver in the crafting table to get 9 ingredients, like  an ore block You can press a shortcut key (R, by default) to quick break down quivers 1 step down for quick arrows
Current compressed stuff:
Quivers
Flesh Blocks
-=-  Mossy Milk  -=-
Mossy milk is a way to spread random moss more realisticly. Just place a bucket, and it will turn random blocks mossy, and eventully disappear.
-=-  Enchanted Cauldron  -=-
Right click with random items to get it to do something random. (I don't want to reveal this)
HINT: Right click empty enchanted cauldron with gold block to get a pot of gold, then right click with rainbow blocks to move their color along the hue line.
-=-  Rainbow Blocks  -=-
Outputs signal when raining. Can be passed through. Has a no detail texture on purpose. Extremely saturated in color
-=-  Hourglass and planter  -=-
planter is the soil needed for flower seeds.
Hourglass ages blocks. Requires a overly complicated setup to work (I'll probably will remove the setup)
hourglass and planter are meant to be a set
-=-  Beams  -=-
Place a matching block on 1 side, air on the other, and the other nearby blocks not matching and it will place a strait line of said block
-=-  Game Pieces  -=-
Dice will roll a random number between 1 and 6
Pawn does nothing
-=-  Gravel Sack  -=-
Any block update will cause this block to turn to gravel, unless 2 blocks under is string
-=-  Mine  -=-
Can be seen with x-ray. Can be deactivated by placing a turned on redstone torch 3 blocks down.
Will detonate when:
player touches it.
redstone happens.
player punches it.
block update.
(FUN FACT: I tend to call it as "Update Mine", because that was its original name)
-=-  Pots And Vases  -=-
Found through sifting. (or if you have my expansion for ruins mod support) Sifting usually gives shards, repaired version does NOT have the same texture. Pot = 1 block tall. vase = 2 blocks tall.
-=-  Potion Waste  -=-
Gives bad potion effect and destroys your world. occasionally spawns insects that place it to keep the waste duplicating. because of a bug, it is impossible to remove.
BOTTOM LINE: Don't get potion waste in your world
-=-  Control Panel  -=-
Allows to send a block update to chosen side
you can set an observer 2 blocks away to make it activate redstone.
I was going to make it directly active redstone but that is not an option.
I also failed to make a lever mode, it was originally going to have one.
-=-  Extra Stuff  -=-
This version doesn't have a working guide book.
Mossy milk is based on real science. IRL you can blend moss and milk together, and if you pour it you get moss in about a week. (Learned from Bill Nye, the science guy)
Please tell me if you get a golden quiver in no command survival, you are allowed to use other mods installed when telling me.
potion waste remover doesn't work. >:( F***
Enchanted cauldron model loves to go stuped.
This mod was made in MCreator: https://mcreator.net/about
Official Forum: https://mcreator.net/forum/41927/quetheds-misc-mod-official-thread
MCreator Page: https://mcreator.net/modification/42236/quetheds-misc-mod-2
I need opinion on if I should add a crystal cave dimension next update
If you are going to use this in a modpack, you must credit me, and don't change any recipe related to compressed blocks.

can someone who has v2.0 give me a copy? (mod author needing own mod is rare. my hard drive broke, and I want ALL VERSIONS on my computer)