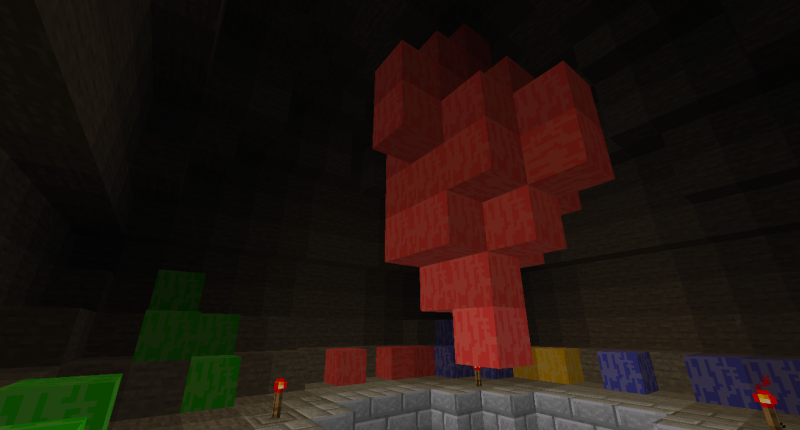 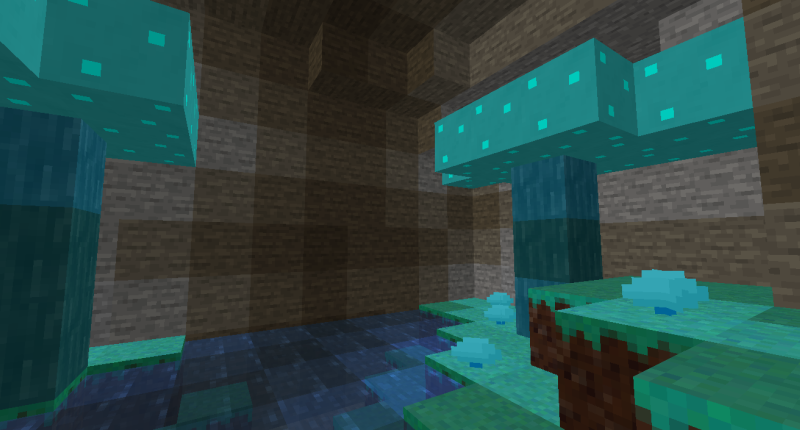 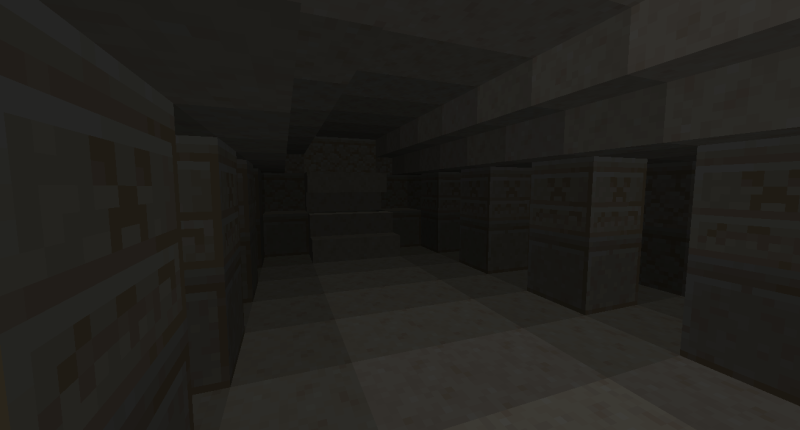 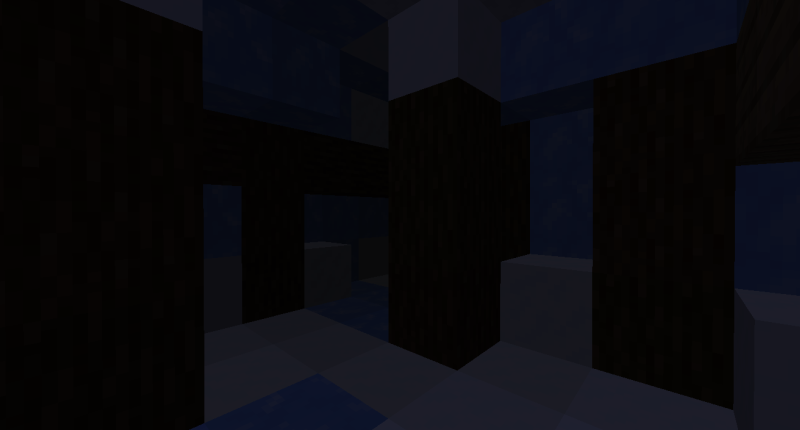 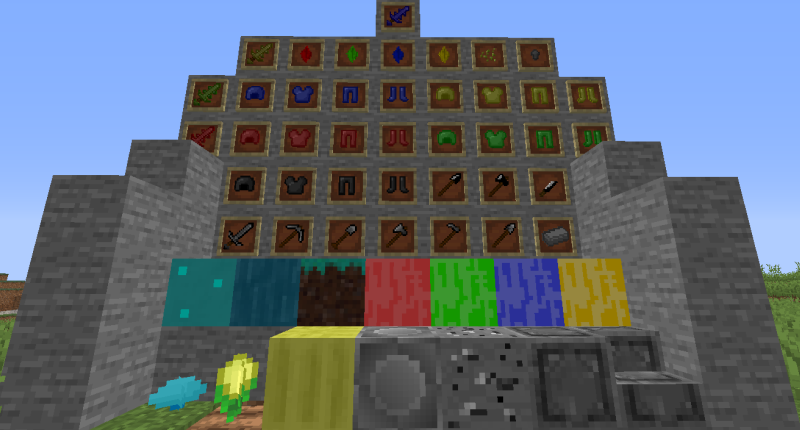 Gear up with tons of new items and blocks! 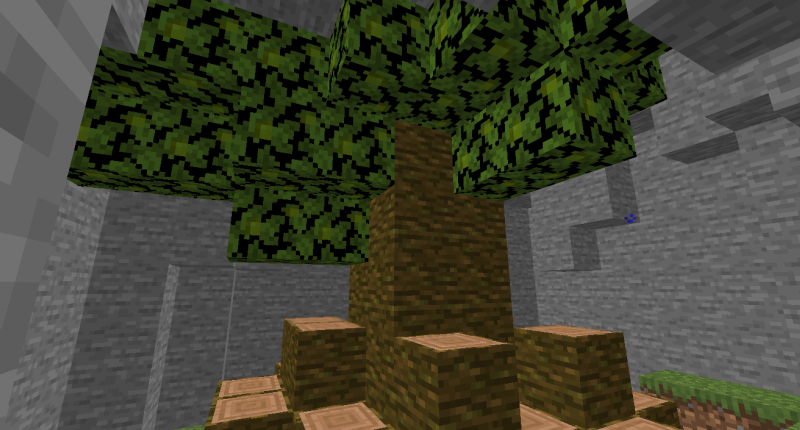 Life flourishes, encased in the stone

Caverns is a mod dedicated to improving the Minecraft mining aspect and partially adding that much-requested cave update, by adding a ton of new underground structures. It also adds some extra stuff like a new ore, powerful weapons and armour, and 3 flint tools because flint in vanilla has few uses besides flint and steel and arrowheads.

This mod is too big to flesh out fully in the description, so I'll sum everything up best as I can.

Added Titanium, between Iron and Diamond. Slightly more common than diamond. Same stats as diamond, but weaker armour. Mine ore, smelt it to get ingot, craft stuff. Can craft a Spear, which attacks 0.1 slower than a sword and deals 1 less damage than one, but only needs 2 sticks + 1 ingot. Higher durability than diamond.

Only generate in the Crystal cave structures and the Geode Cavern structure. Comes in 4 different colours, red, green, blue, and yellow. Breaking it gives you 3 crystal shards of the corresponding colour. 9 crystal shards can be crafted into a Crystal block, which can be used to craft armour and a sword. 1 stick, 2 crystal blocks of THE SAME COLOUR = Crystal Sword. Each colour has the same stats, 9 dmg, and higher durability than diamond, same for armour, which has no dmg but gives 4 more armour points than diamond + same armour toughness as diamond. Silk Touch doesn't affect crystal blocks!

Geode Cavern: Large cavern with crystal blocks scattered around the edges. Rare. In the middle of the cavern, a giant red crystal geode floats above an exactly circular lava lake. Also has a ring of stone bricks around the lava with evenly spaced 4 redstone torches.

Miner Camp: A small cave that contains a campfire, an empty chest and a brown bed. By far the commonest structure.

Lightshroom Cave: A cave that contains a small pond and has unique grass as a floor, along with unique mushrooms. The grass is called Lightshroom Grass and glows brightly. Lightshrooms grow on this grass and make light even brighter. 2 Giant Lightshrooms generate here, with glowing stems and tops, which grow as brightly as normal Lightshrooms. All Lightshroom stuff is cyan for no real reason. These can spawn anywhere underground but spawn more frequently under Mushroom Island biomes.

Egyptian Tomb: A sandstone structure that only spawns under Deserts. It has an entrance, which will most likely be blocked off by stone. Inside, pillars decorate the sides, while a sarcophagus is visible. The sarcophagus has a loot chest (only good stuff, I assure you), but if you open it, you will receive a nasty surprise.

Tree Cave: Same layout as Lightshroom Cave. Only spawns underneath Forests (oak only). Has a small pond, two oak trees, and some flowers. The ground is podzol with some coarse dirt patches.

Birch Tree Cave: Exactly the same as the normal Tree Cave, except only spawns under Birch Forests and has birch trees instead of oak.

Gold Mine: A room with a gold ore deposit of 7 blocks, with a tunnel and supports branching off, but cobblestone blocks the tunnel after 4 blocks. Nothing is behind the cobblestone. Only generates under Badlands.

Wooden Supports Cave: A cave with lots of supports made of spruce logs and planks holding the roof up. Only generates under Taiga and Redwood Taiga biomes.

Witch's Lair: A small cave with a small patch of podzol with mushrooms growing on it with some skeleton heads lying around. A witch will spawn here upon world generation. Only spawns under Swamp biomes.

Ice Cave: Only spawns under Snowy Tundra and Ice Spikes, and also Snowy Mountains. It's just a small cave made out of Snow Blocks and Blue Ice.

Jungle Tree Cavern: A cavern with the floor made out of Grass Blocks. In the middle, a large, custom made jungle tree reaches up to the ceiling. Only spawns under Jungles and Bamboo Jungles.

Dwarven Fortress: A structure made out of Dwarven Brick, a unique block. Has an entrance, empty room, 4- bed bedroom with grey beds, and 4 forge rooms, with a fireplace made of cobblestone and netherack and an anvil each. Only spawns under (or inside) mountains. All the inhabitants seem to have disappeared...

Titanium Mine: Same as Gold Mine, but has Titanium Ore instead of gold. Only spawns under Plains and Savannah biomes.

Disturbed Bone Pit: Same as Gold and Titanium Mines, but has no ores in the main room. Instead, the room generates chock-full of skeleton skulls, with a few bone blocks scattered about. Only generates under Roofed Forests.

Dwarves: New race, with two mobs. One is passive, other is neutral and attacks you with an axe if you hit any dwarf nearby.

Undead Miners: Pickaxe-wielding undead that spawn in the lower layers of the world.

- Increased chance of structure generation for every structure except Miner Camps, Geode Caverns and Crystal Caves.

-Updated Dwarven Fortresses; they now have Dwarven Brick Stairs in archways instead of Stone Brick Stairs.

Termite Colony it a dirt covered area with termites in it

Nice idea, once I get Tabula I will make it with termite spawners, dirt and stuff.

Searched 'termite' on Google and I've decided to add a King termite boss if I can. It will call for help when attacked, it's hostile and it will spit acid and maybe summon soldier termites when attacked.

Just some advice: All the structures except Egyptian Tomb and Dwarven Fortress have a cuboid block of stone surrounding them. Easy to spot in a ravine, but if you are in a cave with an unnaturally smooth floor...

The reason I did that partially was to encourage more mining then just running through caves, because it's dangerous and tends to get you killed. Mainly, it was so the structure blocks would work properly and not generate air as part of the structure.