Essences Of The Worlds 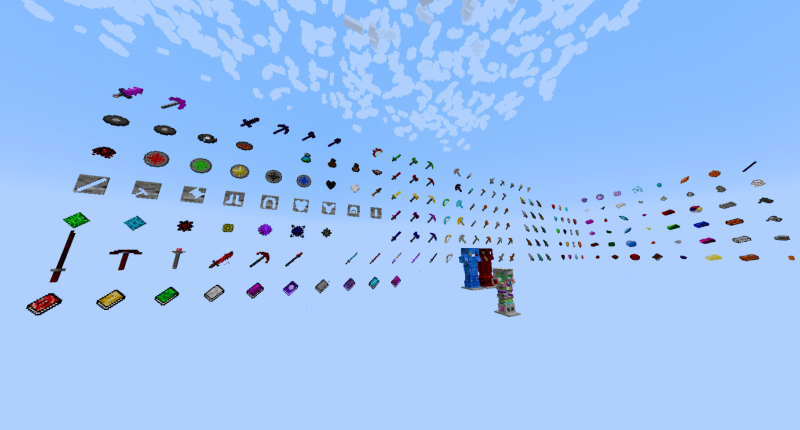 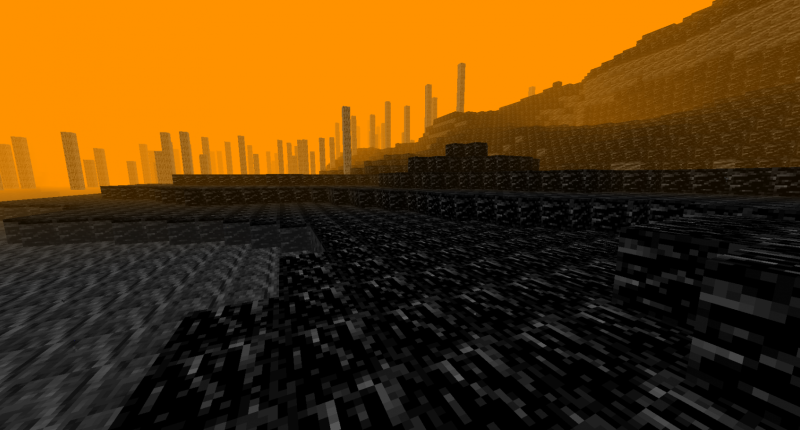 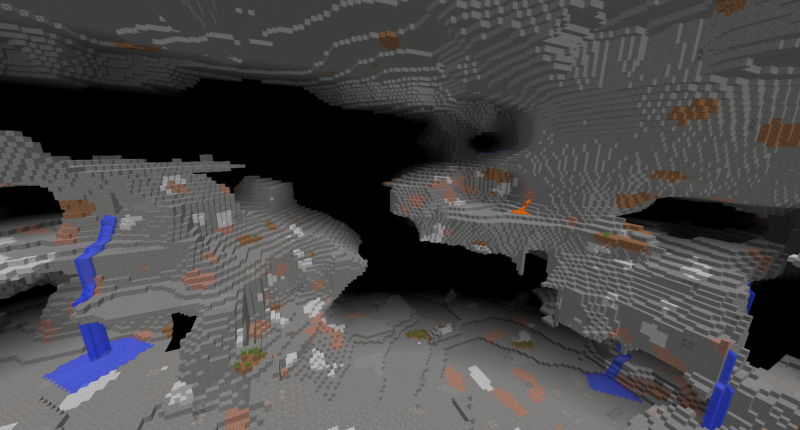 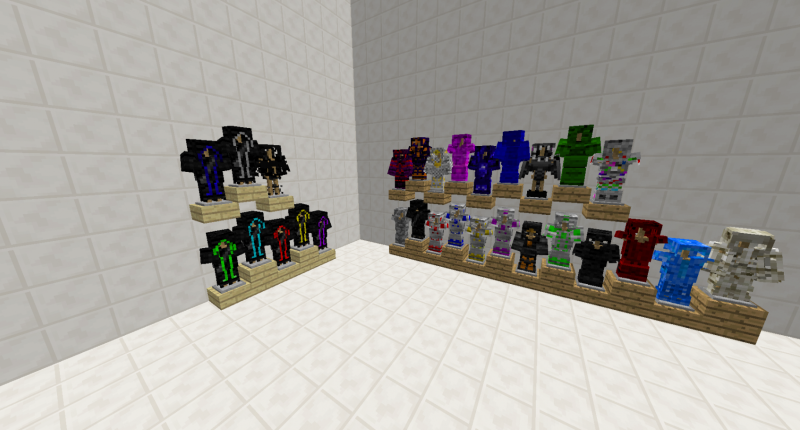 All armor at the moment 7.1 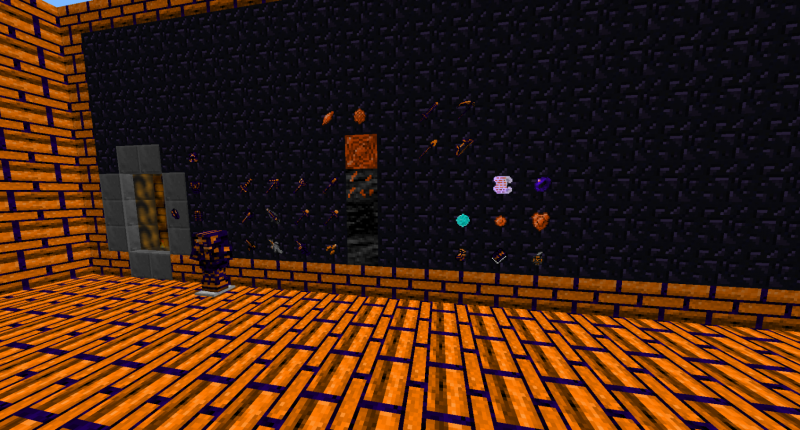 Mod "Essences of worlds" adds new ores, worlds where you can get these ores, tools and armor, mobs that will be defeated by you. Essences of Worlds are not designed for globality, because it is more like adding a secondary atmosphere to your modpack.
Fight! Get it! Break it! Become a legend!
530+ New Items!
43+ New armors!
280+ New blocks!
6+ New Dimensions!
41+ New Mobs!
25+ New Structures!
25+ New Biomes!
And other!
Latest Version >> 0.7.1
Page on CurseForge: https://www.curseforge.com/minecraft/mc-mods/essences-of-the-worlds
0.7.1.1 Coming Soon!

7.0
Big update!
Will be divided into 3 parts: The base and two extensions.
___
Changes:
Bug fixes.
Some new textures
Changed battle with the King of Skeletons
Nether crystals: Using as fuel melts fewer items.
A search bar has been added to the Tools and armor tab.
Advanced workbench: Changed the interface. It also works a little differently now. Blanks are required for creation.
Rarer coins can be turned into less rare ones.
Elemental potions: removed the recipe. Will be added along with alchemy in 7.2
Removed properties of elemental potions.
Removed recipes for healing and elemental potions.
Removed the "use potions" button.
Removed a fragment of the soul from the recipe for Dragon scales.
Changed the recipe for an ingot of fire essence.
Changed the recipe for the poison dagger and sword. Now there are no drops of poison.
Changed the recipe for a diamond ring. Now there is less iron is wasted.
Renamed walls and fences. Now it is written what they are made of.
Moved walls and fences from the Decorations tab to Blocks.
Changed the number of trees in the Tropics
And a few other changes
___
Hardmode - are you tired of simple weak mobs? This game mode is for you!
Mobs become stronger, and it is harder for you to survive, but the reward will be more valuable! New loot from bosses, more chance from mobs, get everything you can!

___
New Weapons:
Magic Books: new long-range(and not only) weapons. Can be obtained from a runic leather bag.
Scythes: A type of melee weapon. Differs from the sword only in damage and durability.
Bow's and crossbows: More damage and durability than origin bow.
___
New sets and tools:
Obisidian tools: More durability and more efficient than diamonds versions.
Bloody tools and armor: Not particularly strong, but practical armor available at the beginning of the game. Tools can be compared to iron.
Ancient tools and armor: Armor falling from the boss of Ancient cave. Protects a little better than mythril. Tools faster, powerful and very cool tools that mythril.
Frozen tools and armor: The armor is not inferior to iron. Tools are similar to iron ones.
Meteorite tools: Are almost the same as iron ones.
Meteorite pickaxe can smelting ores.
Sacrifice daggers: Allow you to collect souls from creatures. The better the dagger, the more souls you can get from a single entity.
Terra\Flame\Hallow\Edge\Fear tools: Unique items associated with individual worlds. They have unusual properties.
Frostburn items: They have infinite strength.
Sticky wand: Allows you to collect fragile blocks.
Copper and tin tools: Slightly weaker than the iron versions, and stronger than the stone ones.
Bronze tools: Equal to iron tools
Oceanite tools: Slightly superior to iron tools.
Drills: Faster, and stronger than ordinary picks.
___
New Accessory:
Gold and Diamonds watch: Shows the time of day and more accurate time. (Wip)
Levitation cores: Allow you to levitate for a while. Have three levels.
Mining core: If you dig anything with this core, auto-melting occurs.
Mana core: Material
Hellfire shield: Extinguishes the player if the player is on fire.
Ancient shield: Blocks damage from liquid of death
___
New materials and ores:
Meteorite: Appears in the world in small heaps on the surface.
Blood: Drop from the mobs in the new biome - the Bloody Ground!

Accessory:
Ring with core gem: Passive effect: While you are burning you get strength. Active effect: You spend 2 hearts and get a level 3 strength effect for 20 seconds.
Scroll - Core: 10 Uses, when used reduces your lives to 4 hearts(2 in hardmode) and increases your strength, defense, and speed. Can be obtained in Deadland when enchanting an ordinary scroll.
Scroll - Celestial: 10 Uses, when used it gives saturation. Can be obtained in Heaven when enchanting an ordinary scroll.
Mining core: When you dig something,it is immediately melted down.
Magic core: Material
Core of Normal\Nether\End world: When you die in a certain world, you will return to life with half of your HP
Exp Core: Moves the player's experience to a special dimension. The experience can be extracted by pressing the Right Mouse Button and holding the shift.
Shield of Hero: With a health of 2 hearts or less, heals you for 5 hearts, and spends one durable

New Tools!
Core tools: Quicker than the obsidian. The drill, Pickaxe, and Warhammer have unusual properties.
Celestial Stone tools: Durable and affordable tools for the middle of the game.

New Armor!
Magic Robes: 7 different variations directly related to the essence. They do not have any properties and are only decorative.
Unstable Core Armor: A stronger and more advanced version of the Volcanic armor. Protects stronger, and does not slow down when worn.
Fallen Angels Armor: Trophy from the boss.

New worlds:
Miner's cave: A world designed for mining various ores. The portal activator is created in a normal workbench.
Deadlands: The deadlands are the place where everything died. Activator in this world can be obtained by mining obsidian\obsidian crate in hell.

I decided to move it here too, I hope you like it

The armors are beautiful

Thank you for your feedback. <3