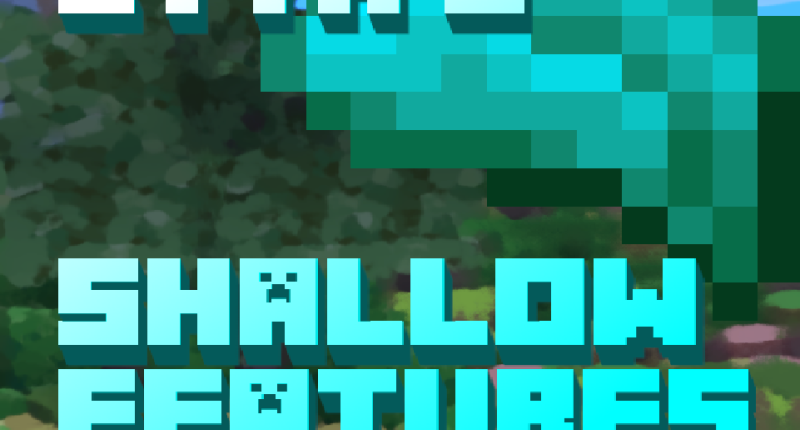 Logo but it doesn't fit into the picture frame :-(

This is Lyth (who?) coming at you with a published minecraft mod. It's in its early development stages and I'd like to see some feedback or opinions about the mod.

The mod aims to add stuff into the game, with not much gameplay depth but just a few fun extra features to play around with. I used MCReator for the modmaking (duh), blockbench for modeling and Gimp and Piskel for drawing my textures. Textures are made by me, so they may be bad and they may be updated maybe.

Plants to make string and cloth.

In the plains biome, you can find wild flax flowers. Those can be crafted into either flax fiber (like the recipe of a stick) or linseed (just anywhere in the crafting grid). Linseed can be planted onto farmland and it will grow into a flax plant. Once the flax plant has grown blue flowers, it can be harvested to grant 1-2 flax fibers. If you want more seeds for planting, you can wait for another stage (kinda dry looking) when it will drop more seeds as well. 4 flax fibers can be crafted into some string, which is its primary purpose of getting string without killing spiders.

Flax cloth can be crafted.

And you can craft wool from it (4 flax cloths) or use it in place of white wool in the recipes for beds and banners. Flax cloth walls are a thing. You could build with them, they function like glass panes.

Vicious monsters of the mountains, they lurk underground during day and come out to play during night. Luckily for you they are pushovers. Luckily for them they come in big packs. They may drop their prized only article of clothing, the Loincloth. It's pretty bad by player standards but hey, um... Uuhh... Actually it has no redeeming qualities

hey, at least give me something to cover up my feet!

To add to your exploratory experience, this mod litters the world with plenty of nice plants. Some are beautiful, some you don't want to touch, some can be crafted into salad (6 edible wild plants + bowl), some can be harvested for berries.

A biome. Vibrant, but hot, dry and swampy.

This biome was designed after what the "guidelines" or safety instructions of visiting a marsh in my country are. And the most important one being that you should watch where you step. IRL, these marshes might not be solid to walk on entirely. If you don't pay attention, and step on fresh green places, you might slosh through and get your feet really wet and muddy. And in Minecraft, I've amplified it so that if you step on wrong squares you'll fall through and most likely drown :). To avoid that, don't step on the green peat blocks, as some of them do not provide a foothold. Yellow and red peat should be a bit safer.

A lot of the ground in this biome is made up of colorful peat. Uses for them include: you can smelt them in a furnace to dry them up one stage (green to yellow, yellow to red) and smelted red peat gives you a peat lump which is a fuel, smelting 10 items, and with which you can also craft a peat block (with 6 lumps) which is an even better fuel and also a plant-friendly block.

Also, walking on peat has a chance to wetten it up one stage (red to yellow, yellow to green, green to fall-through), so watch out when walking on even actually solid green peat.

The marsh also has some decorations, namely tiny pines, medium pines and mosses and grasses. Tiny pines can be bonemealed into medium pines. Medium pine bark functions as a fence, but currently only drops spruce logs. The mosses are decorative and also can be found underground.

Cool little guys. They spawn in all kinds of forested biomes. Upon death they drop a snail shell, which can be used in crafting a deadly weapon.

The scary mobs. The Bog Zombie is just your average zombie, except he doesn't drown in the peat pits. (Scary bug: sometimes the zombie spawns as a baby, but the model doesn't reflect this. So you can have zombies with faster speed and a tiny hitbox.) The peat Creeper though, will make your life much harder at night in this biome, as its explosion, instead of damaging blocks, makes all peat nearby soggy and wet and drowny. To add to the horror, it can explode multiple times. Don't stand around on peat with these guys around!

A biome supposed to be very peaceful. There's giant flowers here, the petals and stems are harvestable. The stems craft into various wooden blocks. The huge flowers aren't replantable or renewable, so use what you're given wisely!

A biome of fire and air.

This biome was designed after, uuh, hot places in movies? The ground is made up of glinting ash and glinting basalt, while lava grids and pools dot the landscape, often drenching the mountainous terrain in lava.

The ash can be crafted (9 ash) into decorative solid brick blocks and the basalt too (4 basalt). All have stairs, slabs and walls.

The best and the defining feature of this biome are thermal vents. They are air streams blowing out of the thermal vent base block. A strong stream of air, it pushes most entities upwards (including arrow and trident projectiles, items and mobs). They can go through blocks, as long as there is air above those blocks and a vent base at the bottom.

Petrified logs also exist, with the palette of glinting ash and the bricks.

In the underground mines of this biome, be sure to look for Brimstone. It's used for, for now at least, one specific crafting recipe, coming up shortly.

Small fortified outposts of Illager origin can be found here. They contain loot and the owners of said loot. Besides pillagers, there's also

Arsonists, who will set you on fire, then catch on fire themselves and likely explode (fireryly) when they perish, and

Bombers, who make use of a certain explodey weapon to kill you. And everyone else in your vicinity.

Lobbing Bombs are the greatest solution to any problem known to man (and Illager). Throwing these firey shells of fury at anything will set it alight and blow off its nose. Along any other appendages. It works as crowd control, just be sure to not get hit yourself. The explosion briefly stuns hit entities.

That's all for now I guess. Please do suggest/complain/whatever and give me feedback. This has been really fun so far to make. Thank's for the attention!

There will most likely be another, final update to fix/improve some things in the mod, after which this mod could be considered complete. I'll have a planned feature list here.

Yet another amazing nature exploration mod! Keep up the great work!

Some images (including the logo, which would have looked fine if it fitted in the frame) look a bit too chaotic, but the mod itself is awesome :)

Mega cool mod! 9/10. I like this Gollum (Troglodyte) and these types of zombies the most

At first I was just "meh", but the further the description goes, the better mod seems. After whole description I'd love to play - biomes are *beautiful*, I love the fortified outposts, and these plants are great!