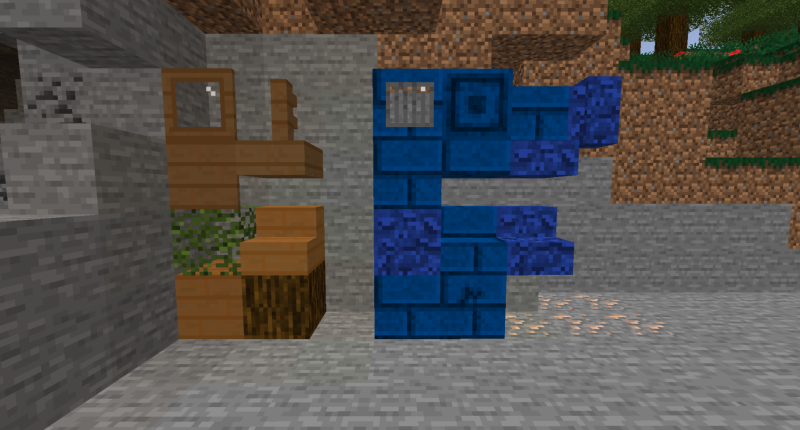 please remember that anything here is prone to change,since the mod is in alpha stage

note:updates might not come out as frequently, because i am working on another mod.

in this update there is:

-there is a structure, the human castle with its own loot table!

-humans are now neutral and don't have any weapons.

they will attack back if you attack them though.

a new type of wood which spawns in the new biome. Can be used to make planks,slabs,stairs,and doors.

spawns in the new deep forest too, and you can make tools

and decorative blocks including bricks out of it.

can be harvested with stone.

a mob that spawns in the deep forest.

it is aggressive towards the player.

it once lived in the human huts (obviously).

now they live in the forest or in the castle

it doesn't have any weapons or doesn't attack you, unlike human warriors and archers..

the human castles are rare, but have really good loot inside

there are human mobs there and they will attack you.

they live in the deep forest too.

they hate the player and humans.

there is 2 bluestone mobs:

the giants are powerful but slow, and the knights are not as powerful,

but more common and faster

features in the future

(things higher on the list are more likely to be added):

i am kinda new to this , so if you see any bugs in this mod ,please post them in the comments.

i'll gladly take suggestions for the mod or description.

(p.s this is the first mod i posted)

-made bluestone stronger than stone but weaker than iron

-now there is more grass

-now bluestone monster and knights attack on sight the player and humans, and deal less damage.

-added slabs, stairs, and walls for bluestone and bluestone bricks

i love the bluestone texture! some ideas:
- maybe fix up the forest log textures?
- "forest log" should be "deep log" or "deep forest log".
- there should be something more special about the deep forest trees, like a new ground covering or opaque leaves or something.
- bluestone feels like it spawn underground.
- bluestone feels like it should be harvested with stone tools, and be crafted into tools that have the same harvest level as stone tools but have a special quirk.

that's good ideas, i'll try to add them all in the next update.

hey,great mod by the way!really fits the theme and feel of the end.

maybe post that on the mod itself?
looking forward to the next update! comment once it's done.

the update is out

whoa, the bluestone bricks are a great idea! just maybe improve the textures. the bluestone monsters are also a little too resolutiony. (hey can i make textures for you) good update!

And I had a "small" Idea. Maybe add more types of humans. It would make them a little bit better.

i've been thinking about this too, i'll start working on that.

If you need textures you can notify me.