!!! New version of the mod will not be posted on the MCreator website because i can't upload mods more than 20 MB !!!
Download on Curse Forge - https://www.curseforge.com/minecraft/mc-mods/eternal-tales/files

Eternal Tales is a mod that adds a huge amount of new content to the game. The main thing in the mod is the storyline that the player learns during the passage! 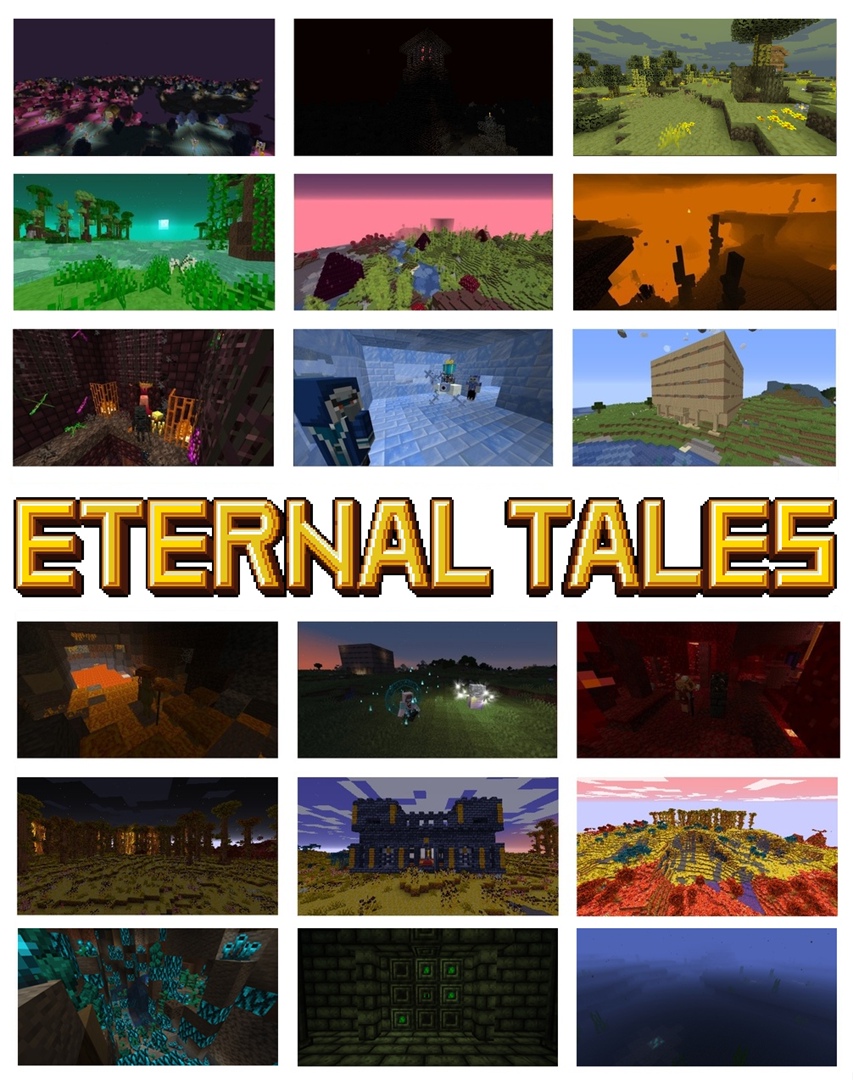 Brief description of the passing mod:
First you need to mine a ruby with a diamond pickaxe and make a ruby pickaxe. This pickaxe already produce cobalt and make a cobalt pickaxe.
After that, look on the plains or in the forest for a special dungeon that looks like a huge fortress. This is a maze of Vivid.
It has to be passed and on the top floor you will find the statue of Vivid. It is destroyed only by a cobalt pickaxe and at the same time calls the boss - Vivid.
After the murder of Vivid, go to Nether, having improved your cobalt pickaxe with a drop of Vivid.

In Nether you need to get some materials from new mobs - a damaged infected crystal, Destroyer's eye, bone shard and dig up basalt ore.
From all this craft an ashy scarab in the amount of two pieces.
Find a pyramid in the desert where at the entrance will be a picture of a scarab. It opens the door. Afterwards, go to the main hall of the pyramid, opening the doors with materials from Nether.
You will find an altar and 8 pillars around it. When you activate it with a scarab, the mobs will start to spawn and attack you. Special drops fall out of these mobs. When you disconnect 9 of these you get activated drop. Use it on the altar, when the pillars extinguish to move to a new level. When you pass enough levels, the boss - Dead Egyptian Martyr will appear.

Next, go to the Mucunfectio Beach - a special blue biome that appears near the ocean. There you need to find sea prism ore and killing creatures to get their meat.
Craft the Kraken bait and in the rain call Kraken on Mucunfectio Beach.

After that, you can go to the flying islands that you probably noticed in the sky. There you need to find the destroyed portal, complete it and activate it by Comets Crystal.
Comets Crystal Craft (in Interdimensional Creator)
Ingridients:

You will enter in a new world - Comets. There you will find or beat up pieces of aerolite and make an axe out of them.
After that, make a grave. When it is in a dark place, cemetery zombies spawn on it. Kill them and make a cenetery dirt out of their drops. Combine the dirt with an axe, get an Axe of Evil.
When you break Comets tree log called the boss - Terrible Tree.

After killing Terrible Tree, go to Nether and find there a fortress of indestructible bricks. On the top floor there will be an altar. Clicking on it with the Hellfire that drops from the Tree, you will summon the boss - Rock-Blaze. Click on him with Asteroid Stone, you got a Hellrock, that needed to enter in Purgatorium.

Then you need to collect the three parts of the fallen rune in Purgatorium.
The first part drops from the Rock-Blaze, the second part is crafted from the materials drops from Purgatorium mobs, the third part is bought from the Purgatorium Wanderer.
Find a Purgatorium fortress and go inside it activate a special altar with fallen rune.
The boss Nyetet, The Fallen Titan, will be spawned.

Pieces of sunstone drops from Nyetet. Combine them and activate the portal in the Gardens of Eden, which appears in End.

Then find the two buildings - the church and the prison. In the prison from the Sjinns get djinn's lamp. And in the church buy soulbones from Sunfurry Messiah.
From these materials and the fire fuel that drops from fire traps in the maze of Vivid, make a Jaghax's lamp.
If you activate it in Eden, you will award the last boss in this version - Jaghax.

Next you can go to any of two dimensions - Rayana or Lands of Karvat.

In Rayana you need to craft Bloody Eye and summon boss Pterion by click on Bloody Altar. Altar can be finded in Pterion Cave. Find posts of cobblestone-like blocks and dig down.

In Lands of Karvat you need to find god Gulibeg in orange temple. He got you a quest to kill 4 minibosses and boss Enicrih and items for summoning them. Go to 4 pyramid-like temples and kill 4 minibosses: Arla, Haciru, Hirots and Ikkorh. Then go to black cube dungeon, pass it and kill boss Enicrih, then talk with Gulibeg.

Then craft Ender Artephact and summon Arahulum in special structure in End.

5. Shard of the Greatness.

Portal into Kingdom of Amber located in Volcanech.
When you enter in portal you'll see a chest appears near you. Inside it will be a note, that tells small history of Amber and key into the maze. Next you need to find an Amber Maze that appears  2000 blocks west of first portal to Amber.
You need to pass labyrinth and find the central room - planetarium. There's a wall with history of Amber. When you read it you can summon boss of Amber, but where he is?

Amber Castle located 2000 blocks east from first portal in Amber. There's Royal Altar. If you have read an history of Amber you can summon king of Amber - Xaxxas XIX.
This boss can summon his warriors and when they near him, Xaxxas is invincible. But when warrior is hurted Xaxxas has hurt too.

Next talk with Miguel. He will disappear and drop Black Book. Place it somewhere and you get materials for building Unahzaal Portal and Cursed Page. Craft Damaged Astral from Cursed Page and all of mod swords, next craft Unahzaal Crystal.

Next you need just pass the Final world with Final boss - Unahzaal and his trials! Good luck!

Additional Bosses and way to spawn them:
Halloween boss - the Spirit of Halloween. His summon item is made of pieces of aerolite, Hyacinthum ingot, Jack'o'Lantern and ectoplasm.

Tsar of Piglins - Click on Hyacinthum Netherite Block by Staff of the Circle of Flames.

I'm calling MOTW right now. This will be MOTW next cycle.

Congratulations for winning Mod of the Week :)
Great job on the camp you spawn in, I think it's a great touch :D

OMG. Thank you very much!