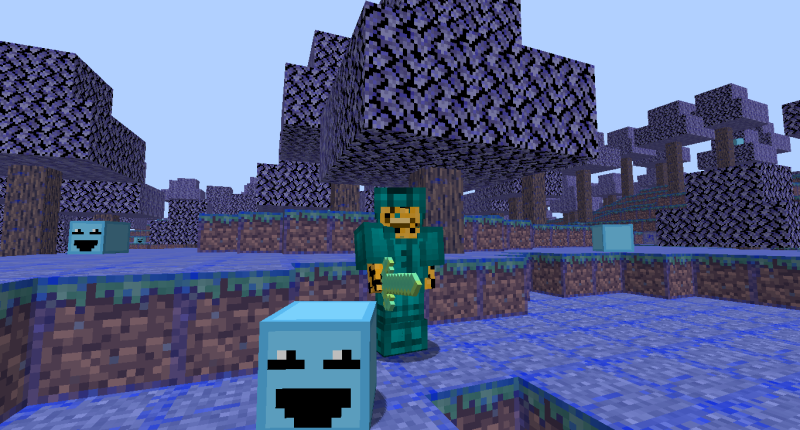 Blither:the blither is the dimension of the little buds,in there we have Blither stone,Corrupted Blither stone,Blither Oak, and a new structure that is like a mini mansion, there we found many Diamante Dorado,and a new mob called Little Guardian. The Blither stone can be converted in Cobblestone, The Blither Oak only it serves for a Shuriken Launcher

and with the Corrupted Blither Stone we can make Ingots to make Shurikens. We can found so many Little Buds there tho

Overworld: theres not a lot about the overworld, only that theres a kind of house that spawns with a little bud inside o a Broken house that is more rare than the other, we can't easily find the Little Buds and the Meal Plant grow in taigas and plains.

Little Buds: This boys drop meal and scales (escamas) 5 of both, the scales it serves to do armour,wich is better than diamond, to do blocks for a portal to the blither, a disc, the Blither Pase and..... no more than upgrade scale armour to Diamante Dorado

Diamante Dorado: this ore can be crafted with Diamond, Gold And Scales, with these we cand do a sword, axe, pickaxe, shovel, sticks for hammers, a disc and upgrade scale armour to Diamante Dorado

Hammers: we can do 2 hammers, the hammer of Scale, and the hammer of Diamante Dorado, they are the same but Scale is better this time

Tames: we can tame Little Buds with meal and the Little Guardian with Coocked meal

Meal: the meal can be coocked or crafted with Gold like a Apple, the raw meal can't be eated by the humans because is toxic

note:sorry for the bad inglish and JEI is highly recomended for this mod

-added a new biome, the infected blither, there we have Infecteds that attack players, little guardians, and littlebuds, when they kill a little bud (or if it works a little guardian)

they will infect it and convert it into a Infected, in the biome we found also a infected dirt that gives you poison if you try to break it

-Added a new gem called Nipalium, with this gem we can craft blocks and tool, if we smelt the blocks we will have a Ingot, with that ingot you craft an apple that gives you several effects (it also will disapear the half of your life, only if you have that bar full, those hearts will regenerate anyway)

-Removed Armor of Diamante Dorado and Nerfed the Scale one.

LittleBud 2.3.5
This one was supposed to be launched on october 31, but never released :/

+Added:
-Added entity_corrupted_buddy, spawns in jungle hills, drops Corrupted Scales, that can be crafted into Corrupted Shards, you can do a Corrupted Sword with those, it's the most powerfull weapon on the mod.
-fixed some names/IA.
-Added War Buds, Tameable with Coocked Meal, Attacks the mobs that attacks you/you attack, if not tamed will attack player if hitted.

uhhh, sorry for being dissapeared for like, more than a year, forgot totally this mod, i'll try to be more active!
-The Mod Creator

you definitely should do the description. how are people supposed to expect what's in the mod without a good description