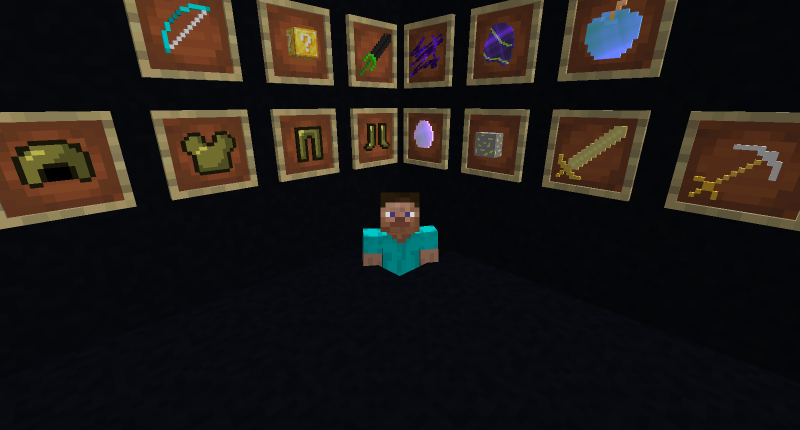 Shows all mayor items that have been added

AFewMoreThings is the first mod I've ever created and still very basic.
What AFewMoreThings adds:
- A new Fuel, the Ancient Coal: It is a better fuel than Lava and can be crafted
- A new Resource/ Ore: Stone of Blessing/ Blessed Items (For now only being The Blessed Sword, with pretty high damage and an insane fast Attack Speed, and the Blessed             Pickaxe, being faster than a Gold Pickaxe, both having a High durability)
- The Effect Bleeding/ Potion Of Bleeding/ Arrow of Bleeding: A still buggy potion, damaging you/attacked entity and making you/attacked entity hungry
- Wither Sword: A new custom Sword that gives Entities you attack the wither effect
- Instant Ignite: A custom Enchant with 1 level that can be applied to TNT, it makes the TNT instantly igniting
- 10 Second Creative Mode: Don't complain about the Texture of this, I didnt knew what else to take. Sets you in Gamemode Creative for Ten Seconds. You'll be set to survival            after the 10 seconds
- Only needed Armor: A new type of armor, uncraftabe, better than netherite. Texture and Models will be fixed as soon as I know how.
- Diamond Bow: A much more stronger Bow, shoots Diamonds
- Diamond Apple: Crafted with Diamond Blocks. Even better than an Enchanted Golden Apple
- Netherite Apple: Crafted with Netherite Blocks. Even better than a Diamond Apple or an Enchanted Golden Apple
- The Lucky Block: The Old Concept, dropping all the listed Custom Items except Instant Ignite Enchant and Ancient Coal

Found one: warum
check him out to! If you are still interested, dm me :>

1.0.1: Fixed 10 Second Creative Mode Item so it will be used after rightclicking it, meaning it will disappear from your inventory. Before it wasnt and you had infinite uses on it

1.1.0: Added The Diamond Apple and The Diamond Bow. Both Items added to the Lucky Block, including Arrows for the Bow.

1.1.1: Added The Netherite Apple. Added it to the Lucky Block

1.2.0: Added The Sword Of Blood And The Lifesteal Enchantment. Also: Project will be paused a bit of time as im starting a new mod.