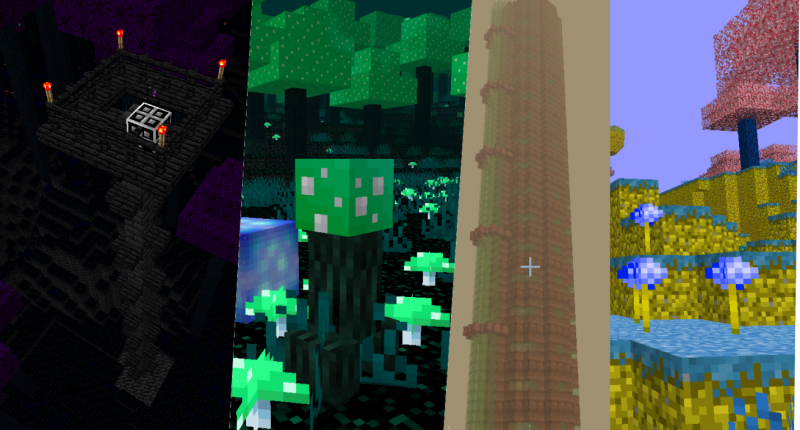 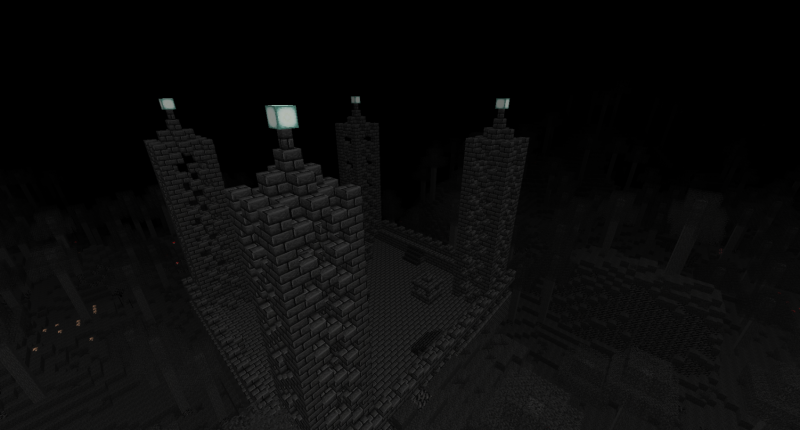 A Skyship in the Glowshroom Forest

One of the mobs

Shadowlands is a mod which adds 5 new dimensions, each with biomes and dungeons, there's loads to explore! First you must summon an kill a huge flying magical construct and then you can visit the wonderous lands this mod has to offer.

The Shadowlands dimention is a dark shadowy dimension with grey trees and black stone dungeons along with occasional red cactus forests, here you will find the keys to the Glowshroom Forest and Vellium dimentions.

The Glowshroom forest has glowing mushrooms everywhere, but be carefull - some of them can move and are not at all welcoming to outsiders. The dimention also has strange stinging Jellyfish and Spore Mines (inspired by Warhammer 40k) the spore mines seem harmless but will explode without warning if you go near them. And of course there are plenty of towers and dungeons to loot and explore.

The Forgotten Desert dimension can be reached by aquireing a gold coin from a Trader robot, the desert has huge ruined rusty metal towers and generators - the remnants of an advanced civilisation lost to the harsh sandy wasteland

The Vellium dimension is a bright sunny cheerfull place - but do not be fooled - the strange yellow one-eyed beasts which inhabit it are deadly, and if you're not carefull you can get hopelessly lost in the low lying fields of fluffy cloud.

The Bloodlust dimention is an evil dark place, full of hostile mobs and covered in sharp spikes which without the right armor can tear apart the player, the most powerfull boss in the game can be summoned here - but it's very powerfull so make sure you can get back to the altar if you get killed (don't worry it won't despawn)

The wiki can be found here: https://www.planetminecraft.com/blog/shadowlands-mod-wiki/

Fixed a bug where killing the Red Knight didn't grant an achivement.

Made Doom Star and Awakened Star bosses less laggy and changed the way they attack - they now summon Vexes instead of lightning storms which could crash the game.
Made Glowing Crystal mineable with pickaxe rather than just tnt/creepers.

You can also get the mod from my PlanetMinecraft page: https://www.planetminecraft.com/mod/shadowlands-new-dimentions-bosses-and-more/

Wow it looks really cool! Some textures would be improved though, but still a great mod :)

This mod is so cool! It must be MOTW :D

Sometimes I'm baffled by how few downloads some mods get

gonna be playing around with this mod as well as a bunch of other 1.14.4 mods

how do i acces the shadowlands lol

First you kill the Awakened star boss, it drops the portal materials, to summon it make 2 lightning crystals and 1 summoning core (it's the 2nd picturehere: https://www.curseforge.com/minecraft/mc-mods/shadowlands/screenshots)

Looks awesome! Is that a custom skybox in the bloodlust dimension?

It's just a plain red sky but there is also a custom screen overlay.

Whoa, I wouldn't be surprised if this won MOTW next!

The mod has been updated and a bug has been fixed.

Why it remember to me about AoA3?