I've already mentioned this on the Modular Expansion topic, but now I want to make a separate topic for it.

After the upcoming RaolCraft Omega update (2.2, which will add new structures, minibosses, totems, gems, decorative blocks and more), there won't be another cycle of updates. Instead, a long series of Hodge-Podge III will begin.

Hodge-Podge III is the sequel of a mod by Eonaut. Right now it only includes 3 dimensions and one boss, while the original mod was a lot bigger. I decided to focus on Hodge-Podge for a bit so I will quickly add all the missing dimensions and bosses (and a lot of bonus content). Like in the times when there only was RaolCraft, except now there will only be Hodge-Podge.

I want to quickly add the missing content because it's kinda sad to see it in this state, and also because I want to integrate the lore from Hodge-Podge with the one from RaolCraft, but I can't really until it's complete.

This doesn't mean the other mods are discontinued though. At the end of the Hodge-Podge age, all my other mods will get a huge update (and, if MCreator 1.9.1 is released in the Hodge-Podge age, I will do a bonus update for RaolCraft just for the ore dictionary XD). This series of updates actually won't be too long, maybe it will just consist of something like 4 updates.

Actually, there also is another reason: I want to release new mods. And before start working on them, I want all the others to be complete.

And what are those new mods?

Well, the first one will be a sci-fi mod. Yes, after all those magic or mining mods, finally a futuristic mod XD. It won't be a "tech" mod though. There already is Pyromancy for automation. It will be a futuristic adventure mod (and yes, I got the idea for it from Trailblazer, but it will be different).

It will be a mod about space, antimatter, alternate universes, genetics, clones, time travel and much more. It will have many references from my other mods and its lore will be integrated with them.

It will actually mainly focus on space exploration and on another alternate universe made of antimatter, which is very similar to the regular minecraft universe except for some differences (the war between light and darkness never happened there for example).

There will be meteorites, armors that adapt to your playstyle, spaceships, alien invasions, jetpacks, helpful AIs and much more!

Here's an image of what could the villains look like (this is just a concept and these characters may or may not be in the mod): 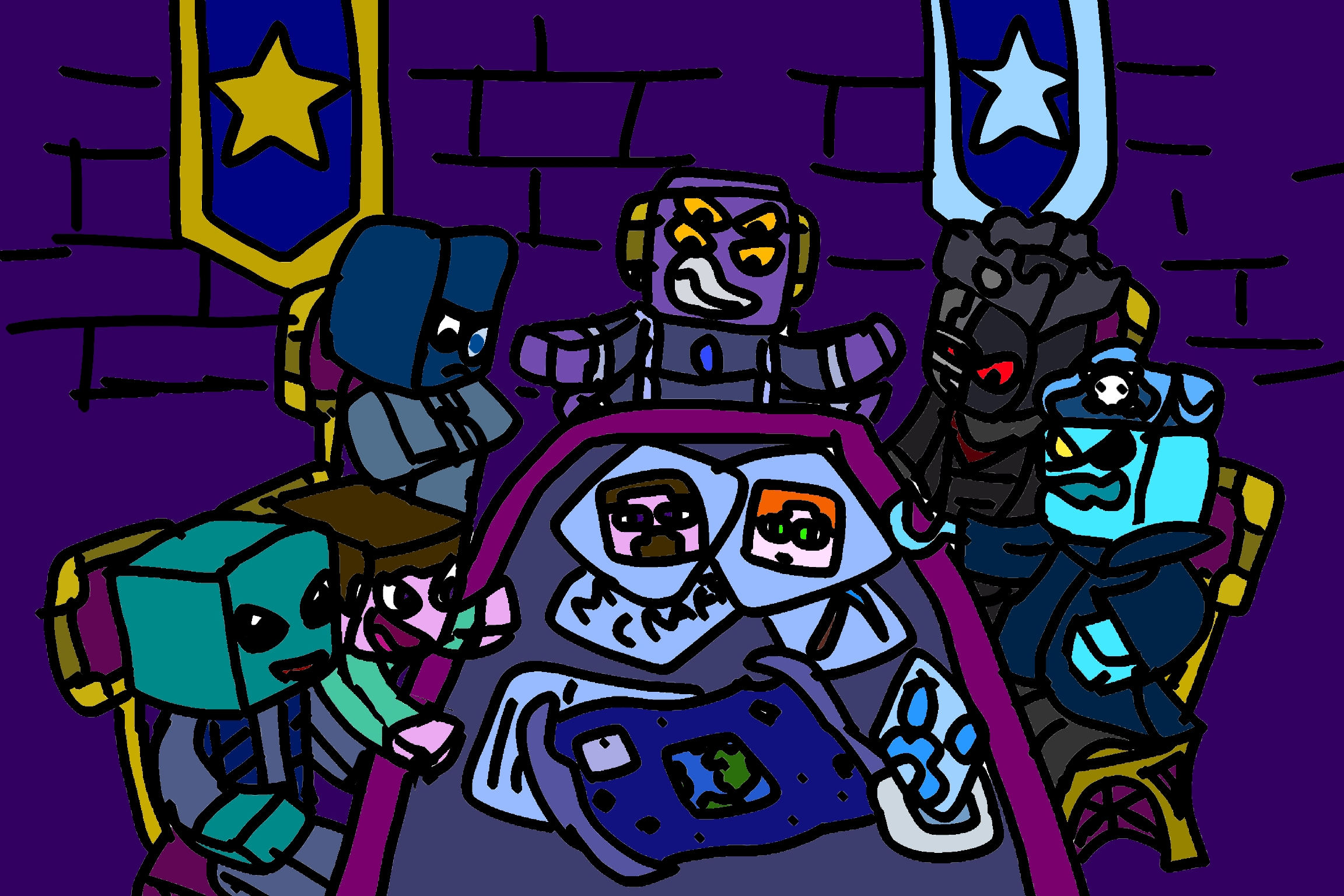 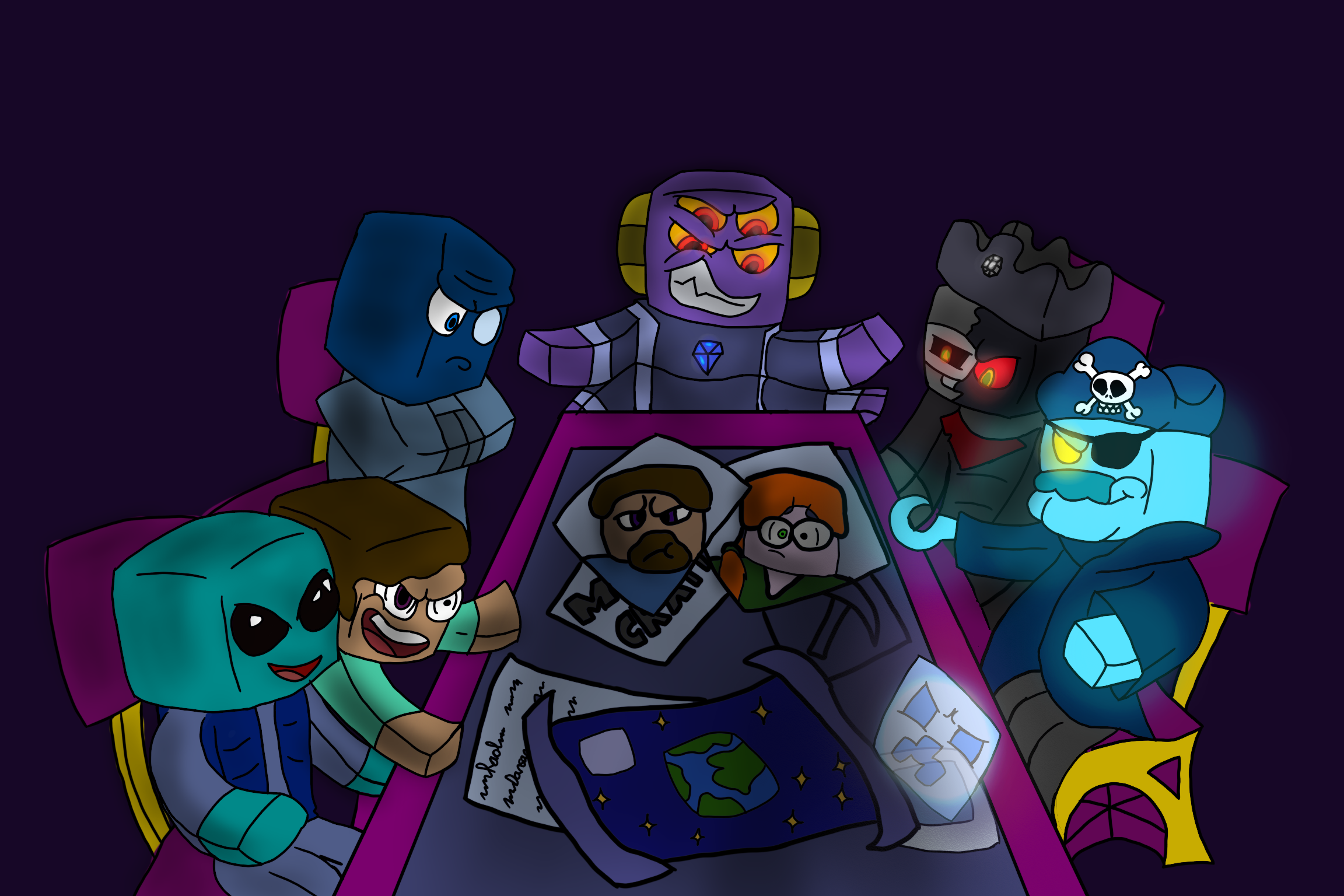 From left to right, they are:

Each of these villains would have his goals and interests, and some might even betray their leader or eventually team up with the player. It's not that solid of an alliance after all ¯\_(ツ)_/¯.

I have many ideas for it, but I still have to decide its name (what about Event Horizon)?

I also want to release a littler mod (littler than Pyromancy). I won't tell you its theme, bit I will let you guess it. It will be called "The Ultimate Plan". If you are minecrafty enough, you'll know ;)

EDIT (01/01/2020): The Ultimate Plan isn't going to be released soon. For those of you who want to try an early alpha of it, here is the download: https://mcreator.net/forum/55916/ultimate-plan-official-topic-early-download

EDIT (12/28/2020): Event Horizon got its own topic, all future announcements will be there: https://mcreator.net/forum/69316/event-horizon-official-topic

Why do new topics with 0 comments never appear as recent topics? :/

Dude. That. Is. Bad. Drawing? OMG you did that on mobile? OMG OMG OMG

well, When antimatter collides with matter, it will go BOOM, so this picture isn't that realistic

Whatever its a tech mod

Anyway, I know they annihilate, but let's just say they wear a magitech armor to prevent explosions... Or something like this XD

I haven't watched the most recent marvel films yet (I still have to watch some of the previous ones), but yes, it could be inspired from Thanos XD

Raol, I will check the bug with recent topics. For the ideas, this sounds just great :O Looking forward to the updates and your new mods.

And the artwork drawn on the mobile phone is just stunning :D Nice work!

Nobody tried to guess the theme of the second mod?

PS: do not search "Minecraft Ultimate Plan" on the internet

I will give you a tip: the "Ultimate Plan" was something once mentioned by Mojang but later scrapped