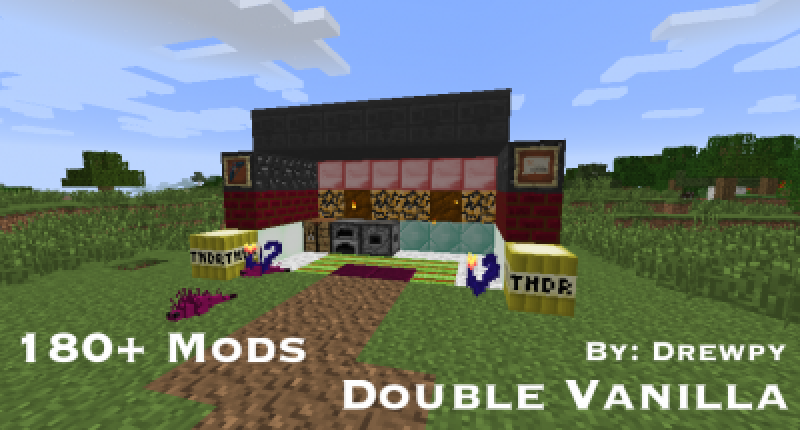 I know the description is long, but, it's optional too, so either stick it out or don't.

Double Vanilla is a mod dedicated to expanding on traditional Vanilla Minecraft by adding more objectives past just defeating the Ender Dragon and so forth. It adds 2 new mobs, 5 new dimensions, 3 more ore types, 3 new foods, a new boss, and a bunch of helpful and cool looking blocks.

Now for some important info on some blocks and tools in this mod:

The Lavawand and the Phraxwand need Bedrock and Phraxdust to work, respectively. Even if you're in gmc, you still need some in your inventory.

Stormphrax and Phraxdust are from the Edge Chronicles book series by Paul Stewart.

Loose Bedrock can only be destroyed by explosions.

A portal made out of Lapis Blocks and ignited with Lapis and Steel can be made to another dimension.

Silvermist Ore only spawns above layer 100 or so.

Tritium and Tritium Blocks can be crafted in different patterns with stone to make every kind of ore, along with Obsidian and Bottles O' Enchanting.

A Tritium Shard crafted with Cobblestone is an easy way to get Stone.

Portals can be made from Blaze Blocks, Aztec Gold, and Gems of the Gods and lit with Flint and Blaze, Bone and Steel, and Gem and Steel respectively.

Mummies only spawn in deserts at night, or in the Barren Wastes dimension, and drop Amber Gems. I have custom sounds for them, but they aren't working right now.

Darkslate is the ONLY ore you can't craft with enough Tritium.

The 9 new bows this mod adds aren't that useful in gms. If you're really into farming, the thunder bow with the creeper bow can get you some some mob heads!

The mining bow is EXTREMELY helpful in gms. At least I think so. It's ammo is glowstone dust.

If you've read this far, congratulations.

Thunder Tnt can't be activated with fire. Only redstone.

Cactus Cookies can be easily farmed. Idk how I came up with the idea for them though...

When you spawn in the Wither Star dimension, theres a great chance you'll be above the void. Just build a bridge towards 0 0 and you'll see land eventually.

To use the Scree Sifter, right-click on it with Enriched Powder or Toasted Scree for some special drops...

All gear (tools, armor) is crafted the same way as in Vanilla Minecraft except for Stygian gear. It's crafted with Stygian Blocks.

The Sniper Bow is now crafted with Stygian Ingots instead of Eyes of Ender.

The Dragon Egg is craftable now.

Giant Eggs spawn a Chicken when broken (It's kinda buggy though. You'll see)

The Ender Dragon can only be rehatched in the Dragon's Hoard dimension.

If you manage to kill the Stygain Knight, you'll get a nice surprise...

The main goal of the mod, and the new goal for survival Minecraft is to... well... you'll see when you get there :)

I wrote original music for the trailer too, so don't hate on it please.

I've put a month or so into this mod, so I hope it's an enjoyable mod!

If you download it, please tell me what you think, and if you don't, well, have a good day anyway!

Just updating the mod to the website format. Still version 0.1.3!!!

One of the best mods on MCreator!

It's not even remotely close to finished

Seriously though. You actually put effort into this! Everyone else just half-asses their work and make all of it "OP", like "BUDDER DIMENTION..KEJKDE" and all that shit. The textures in this are amazing, the idea, everything!

@#4 I'm flattered. Looking at your mods though, you do the same. Maybe we could work together sometime. I'm just about to update this mod now. Should be up tonight. Seriously though, we could rock the world with actual good mods if we teamed.

dude great job. one of the best mods ive seen on this site

Impressive Work Drewpy. I am quite Impressed With seeing these New Ideas.

Very nice mod, very effective use of animation (i think, Hells block) and unique bows, name of blocks and weapons are great to. One question I was getting ready to do a mod review and so i was testing out the bows, when i shoot the thunder bow it spawns fire. is it suppose to spawn fire? (or lightning)

@#11 I don't know why, but the lightning bolt doesn't actually show. Same with the thunder TNT. It charges creepers and such though, so it functions just fine. The fire would just be the result of the lightning. Thanks for doing a review, I want all the feedback I can get!