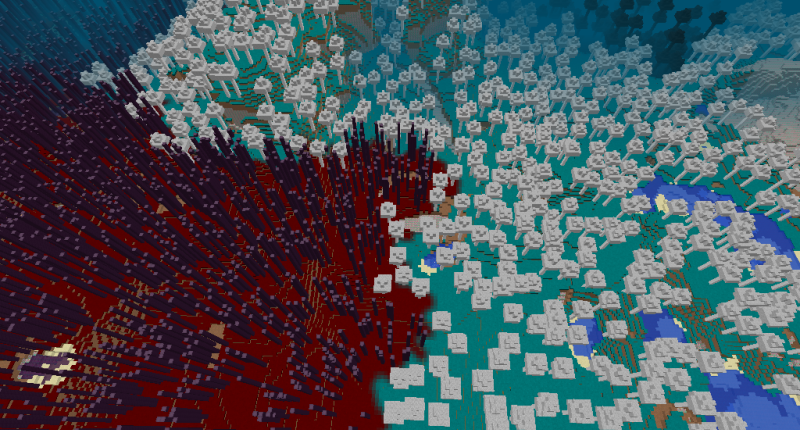 - Added 3 new mobs to go with the biomes!

- Added 2 new items for further use in upcoming updates

- The item textures for the Reality and Reyko armor are !missing! but will still have the equipped texture!

- Added Reality Drop, which while in inventory will grant the blink ability by pressin X,Y or Z.

- Crafted with 4 Fragments of Reality surrounding a Venacki Tear

- Added Reality Hoe, which will crush the reality of the block.

- Changed texture of the Reality Sword

ON FURTHER TALES!
So you conquered the End, the dragon is dead, you gathered all you can from the End City.
Traveller, time to go Further!

On Further Tales is a mod for further exploration value in Minecraft after the end!
This mod adds no new armor so you are on your own! (Protip: Enchant your weapons and armor before entering the further)

This bright land is home to the Reyko, beware though, the Reyko will protect its lands at all costs! (Reyko rods can be made into Reyko Powder (Same as Blaze)

The biome is filled with beautiful skywood trees, which can be made into planks!

Snowmen also seem to like this place for some reason.

It's home to two dangerous creatures, the clumsy Rensansito and the small and clevver Venacki.
The Venacki will explode upon death, while the Rensansito might drop you some Rensato beans for your eatin pleasure!

This place is hard to describe, it's basically where all of reality just breaks!

You will see fragmented reality all over the place, as well as "Existensial Florbs" which upon killing will grant you a Fragment of Reality!
Witches also seem to hang around this place, possibly seeking the hidden truths of reality.

Temp of Darkness
This biome is described in one word, COAL.

The land is just filled with coal, which makes it very dark, and therfore a perfect home for creatures of the shadows.

Travellers to the Further have reported seeing Endermites as well as Endermen roaming the place.

Dark creepers have also been spotted in the shadows, beware!

Seradak isn't all that different from the overworld in a sense.

It hosts Zombies, Spiders, Skeletons and Horses, which of course can be used to travel faster through the lands of The Further.
It also hosts the cute Snelodus, a Mice like creature!

Beware the Eyes of Seradak though, they seem to want to protect the living creatures of this biome, and wil not hesitate to attack you. Upon killing them you might see one of the eyes laying on the ground, do NOT try to pick it up, your inventory WILL BE CLEARED.

This gray biome is home to the weird creature rakik. He might look a little off, but is friendly, most of the time.

Here you can aslo spot the cyborgs called stevmatic, but be careful, they don't like visitors!

Reyko Boots can be made with Reyko gems, which again are made with reyko dust surrounding an emerald.

Reyko boots might not protect you much, but they will give you a hell of a jump boost, which is usefull if you go mountain climbing!

Potion of Levitation can also be collected from the new mob "Ertop" found in the Existensia Biome!

If you decide to bring any Fragments of Reality home to the overworld you might experience the reality break a little...

Dang, there's a lot of cool stuff here. Nice mod! Submit it to mod of the week.

hi I want this mod

This is one of the best mods i've ever seen!

Very cool mod. But please add something useful because made the portal is cool, but useless. Please make useful items that can be obtained in the further.

@#4 I would, I'm just having problems coming up with something more unique than a new sword or pickaxe, or any old potion effect stuff.
Thanks for feedback ;)

Wow your mod is the mod of the week. Congratulations!

Amazing mod! Tons of content and it actually works :P

This mod is amazing! I'll make a mod and put this mod on my modpack!

How did you get there to be multiple biomes in the same dimension?