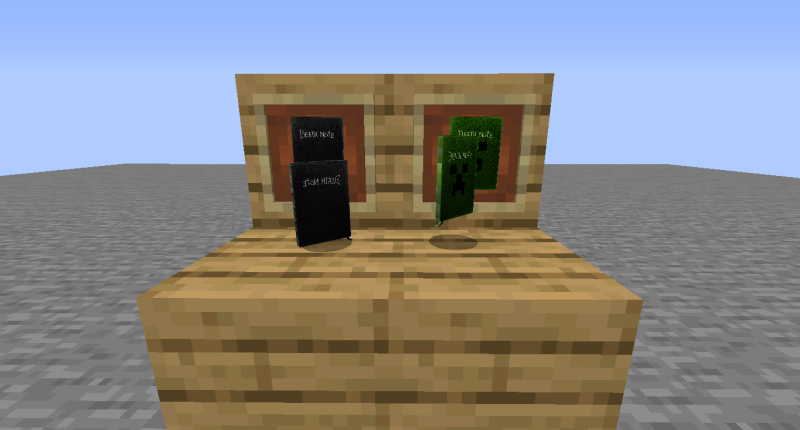 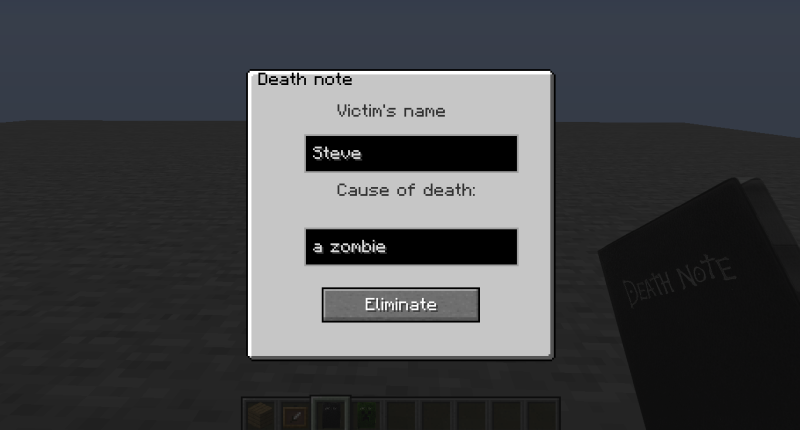 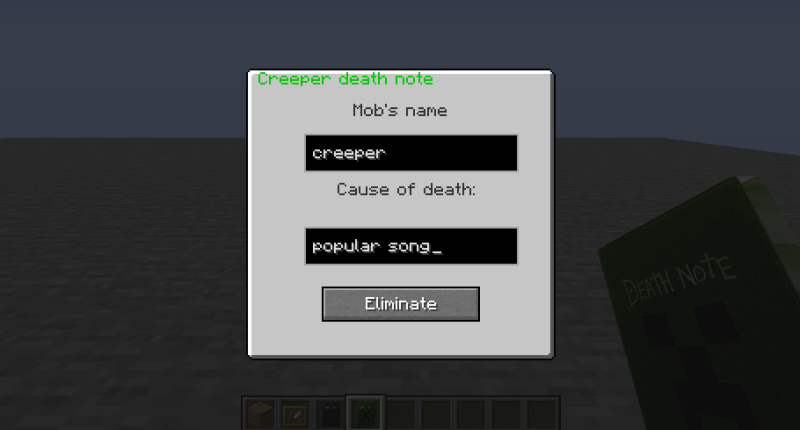 Have you ever dreamed to kill your foe and make it a bit funny? This mod will help you. Mine Death Note mod has been inspired by anime and manga "Death Note".

-You can't craft it or take it from creative menu, you can get it by using command or by your luckiness (every tick you have 1/1000000 chance to get it).

-Death note works only with players but can be used in trolling (example: fake player in the server).

-Death note has limit - 1 kill per day, if you want restore your limit you need to sleep and wake up in morning/day.

-Everytime when you use Death Note, chat will state your victim and cause of death (like in news).

-Creeper Death Note works the same as Death Note but can kill only mobs.

-In Creeper Death Note you need to write with small letter and "_" instead of space.

-Play it with your friends/Start it on your server!

When you use Death Note it kills 2 times instantly (doesn't make any sence).
Updates

-Now you must to write your victim's name, else it won't work (you won't waste your limit).
-If you don't write cause of death your victim will die by a sheer heart attack.

-Creeper Death Note has been added

Is death note a good anime? i was thinking about watching it. i would love to play this mod but i don't have any friends on java.

Yes, it's very good anime, but sadly, like in classic anime, last episodes aren't that good. And don't worry, I think you will find your friends to play with.

I think it's one of the most original series I've ever seen. It is a detective story in a fantasy/horror scenery from an unusual point of view

Absolutely, the less spoilers the better!

Damn pretty cool ideia, but it works with mobs too?

Sadly, it doesn't work with mobs.
1. You'd have to kill absolutely every mob with the same type.
2. In manga/anime Death Note works only with people, as they have soul and own personality.
That's why I recommend to play it with players.

Cool mod :D
If you don't specify the cause it should be an heart attack XD

Thank you so much, I've got an idea for a short update!

The battle against L and Light, its a mind shonen, only the smartest will win.