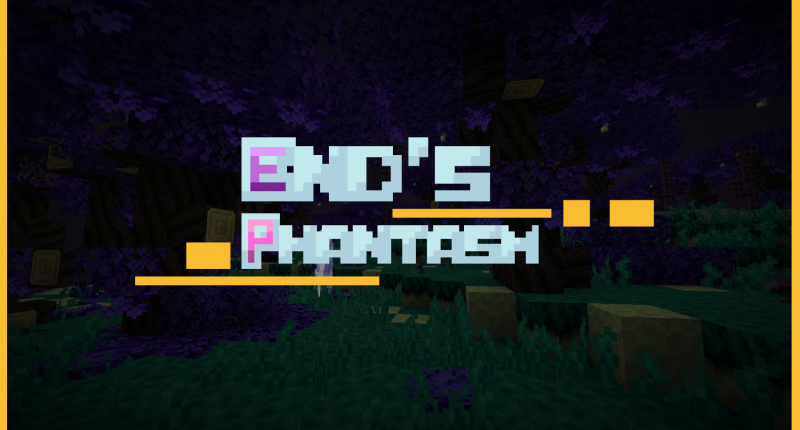 The vanilla friendly End update we don't have!

Luckily, my dream came true. And it’s only the first one among lots of others...

Have you ever thought the End was little too... empty? Then, this mod is for you!

End’s Phantasm (or in short, Phantasm), is a mod intended to be the vanilla friendly End update that we don't have. It currently features one biome, but more are planned (remember that this is a beta version).

To gain access to what it has to offer, you first have to kill the Dragon, as usual. Nothing is changed before this point. The mod actually improves the outer End isles, beyond the gateway. But once there, prepare for a (I hope) breathtaking view!

More info about this place, the Dreaming Den, below:

Noticed the Stars in the End sky? The Dreaming Den is so called because it actually comes from their dreams.

It’s a quite peaceful biome to live in. This place features yellow wooded Pream trees, along Vivid Nihilium and small Putac mushrooms covering the ground, and the usual Chorus Flowers. You may also rarely encounter Arcane trees, mysterious builds or naturally occurring things made from stripped Pream, that feature an Arcane Bookshelf in their trunk. But the classic Endermen, one new mob spawns there: Dee Jays are new bird like animals that will flee if you happen to come too close. They’ll drop Dee Fluff, that can be used to craft Headphones. They also may give you a new music disc if you manage to get them to trust you enough.

There are a few changes to the generation too: Raw Purpur stripes now appear on the cliffs of the isles! Crystal Crags is the first, and probably the first you’ll encounter. It features Crystal spikes sprouting out of the ground (a new material, building block, and Redstone component), as well as semi rare Crystalilies around them. Last but definitely not least, Crysties spawn here! These little crystalline fairies will heal you on touch, and can be bottled to save your life from anywhere in the inventory. The second, most dangerous and weirdest one is called the Underisland. It basically consists of the bottom side of the End isles, which will have lush, climbable Oblivines growing from Oblivion. Why would you ever want to risk your life for some pesky blocks? Well, two reasons: First, you can harvest useful Ebon Berries from Oblivines. Second, Crystals grow here too, and some of them may be corrupted by the Void: if you want to use them to craft weapons, you’ll need some of these special ones. And finally, you’ll probably quickly notice that there are things in the not so empty anymore void around you: huge Putac mushrooms are growing from the deepest parts of it. These big variants of the ones growing on the isles are very bouncy and can be used as launch platforms for your elytra! They can also serve as funny yet risky way to traverse the distance between the main islands. And lastly, their stem is made of dark Ebony Wood. And there are lots of other things you’ll discover as your journey in this no more devoid, but lush and weird world progress!

Hey! I have an idea! How about we can download the end biomes plugins, Link:https://mcreator.net/plugin/92105/end-biomes-forge-1182

Thanks a lot :D

Didn't you know, Better End also revamps the End? And their Forge version is 1.16.5 so its like if you we're ripping them off

also not every end mod is a betterend ripoff. only the ones that steal elements. this is much different in the gameplay as well. try it first.

I actually don't like Better End, so i made this mod exactly to have my own version of an end update. If you really care about it, try it and you'll see it's clearly not the same. You're just rude pointlessly there

Do not piss my pika out! Also ratio + your mod is much worse and End's Phantasm is epic pogger! :D