MCreator 2019.5 is here. The first version to support two Minecraft versions at the same time and allow conversion between these two with a few clicks. Read on!

The most important feature of this update is support for Minecraft 1.14.4. Now 1.14.4 is the default selected generator when making a new workspace and marked as Stable. 1.12.2 is marked as Long term support, as this is the version Minecraft Forge developers decided to select as the current LTS version.

This means you can make mods for both 1.12.2 and 1.14.4 with this version and we support both Minecraft versions. This ticks the last tick on our MCreator 2 roadmap, so this update is considered the first MCreator 2 branch release.

Fluid buckets and item OBJ models will not be supported at this time as there is no good support for this in the Minecraft Forge for 1.14.4 yet. You can read more about this on our issue tracker 1.14.4 ticket.

But Minecraft 1.14.4 support is not the only thing that was added in this update. Many other new features were added. One of the most important ones are new rotation and direction procedure blocks. You can see some of them on the screenshot below. 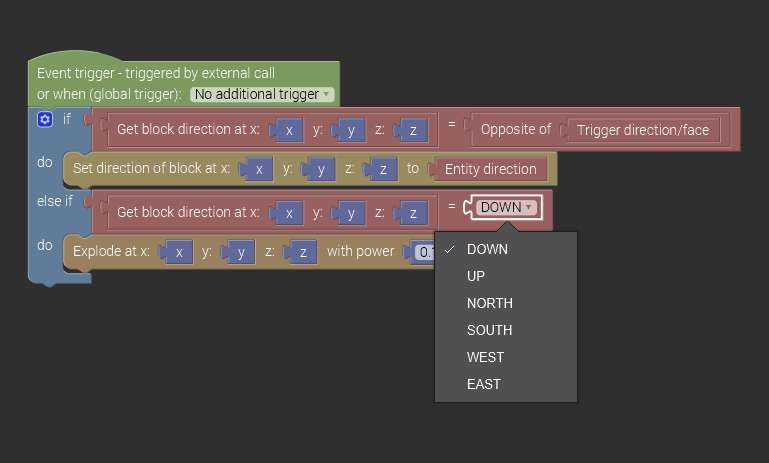 An example of this system in action can be seen on the screen recording below:

New tools like wrenches will be made possible with this update, and replacing a block with another one while keeping the rotation is possible. This system supports rotation control of all modded or vanilla blocks too.

Another heavily requested feature that is finally added is the option to sort creative tabs content. Check the video below to see how easy it is to move the positions of the times in your creative tabs. Just go to Workspace menu bar item -> Edit element order in creative tabs... and the following window will appear:

Some other improvements to the MCreator UI have been made too. One important addition is a new option to select how to sort mod elements and other workspace items in the workspace view. One can select options such as sort by name, date, type, ... One can now select more filters to filter the elements by type, status and more.

The workspace files browser has been improved too. JSON files can now be created in any supported folder, the same goes with images. Libraries and project files are separated in a better way in the tree. 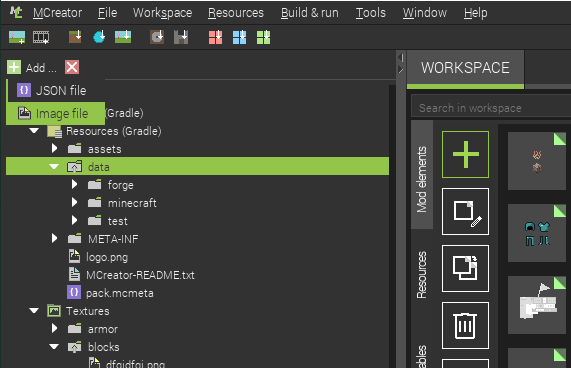 As with all recent updates, the article would be too long if we described all the changes and bug fixes in-depth, so you can see the full list in the full changelog of this release here:

MCreator is run by two developers that work on this project in their free time. The time invested in this project is not paid and donations are the only way to get something back (alongside ADs). The more donations we get, the more we can work on the project (in terms of hours invested) as we can dedicate more time to this project without being at loss. We love working on the MCreator project, but we need to pay bills somehow too, and if MCreator will not cover this, some other project that will take a part of our time from MCreator will have to. This was our main reason for considering PRO in the first place, but now that PRO will not be a thing, we have to count on you, the donors :)

To apply the patch (fix these bugs and get the listed features), download MCreator 2019.5 again and install it over the current installation. If you have update notifications turned on, you will be notified of this patch automatically.

Minecraft crashes after I updated my mod to 1.14.4

If this happens to you, the problem for this is most likely explained here and the solution is found on the said page too: https://mcreator.net/wiki/minecraft-1144-resourcelocationexception-non-z0-9-character-path-location

This video demonstrates how we developed MCreator from the idea of MCreator 2 to the MCreator 2019.5 release which completed this roadmap. Each flash represents change or addition of a file inside our development directory of MCreator.

The next version, the five most upvoted feature requests ! (I hope... we hope.)

Oh and you have beaten again your record of the biggest changelog. xD

All five most upvoted is near to impossible, all of them are huge requests, but we will see. If I get enough donations, I will be able to work more on them :)

what does donations do for you exacly? just curious

donating to someone means youre giving your money to them, so like if you donate to mcreator, they would get more money and be able to make updates faster :)

i not happy want i can not see the texture selector it too dark and not see so if still get me i don't know how else i can say it if my English is always bad to want i just ca not well-read and i mean about that i reading everything in the left side that chat it even have sickness call Ocular Motor Apraxia motor twee so i stay by the old version 1.8.3

Nice update! Im really exciting to test it out =) But one thing, could you add so you can make so slabs are much easier to create, like a template. The stairs and fence/walls got it for a little while ago and I should be really happy if you can do the same thing with slabs. Just click on a button if you understand what I mean =D

Sorry if my english is incorrect btw =/

Thanks! We do plan to add slabs block base.

Awesome! :D
I think I will stay with 1.12.2 for a few other time, but the new features such as direction procedure blocks, attack speed, food saturation, item sorting and more will be so useful :D
Thank you for another amazing update :)

Not quite understood with Rotation Blocks.
I do not know how to make the block face the player through the procedure.

So that he always faces the player.
And I also use the JSON model for it.

I believe there will be some tutorials on this soon. I suggest you to try to experiment a bit too. You have get player direction block and you have set block rotation block, try combining them together and see what happens :)

To apply the patch (fix these bugs and get the listed features), download MCreator 2019.5 again and install it over the current installation.