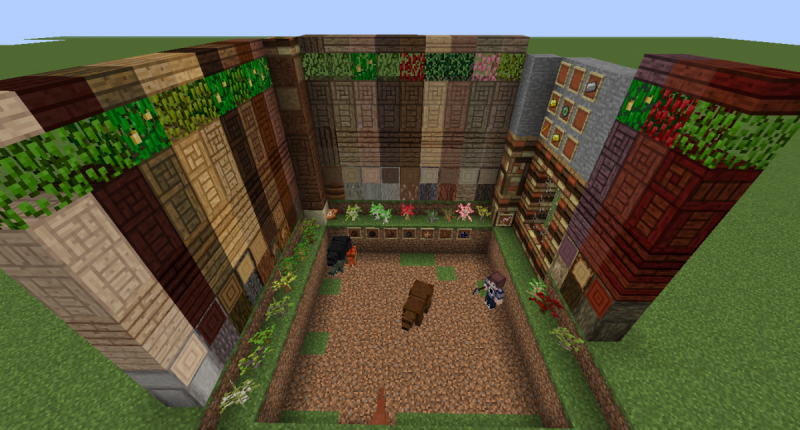 Most of the mod; deer, slices, and items are not shown

NOTE: NEW UPDATE IS OUT! This is the last update that I will be making to the mod before my "retirement". Saplings work now! Additionally, some of the trees now have their own unique schematics, so they don't all look like oaks anymore.

This mod is meant to expand the selection of wood variants in Minecraft by adding a new set of naturally colored woods that blend in well to the 6 vanilla species.

There are no bizarre colors like bright pink, blue, or neon purple: the colors are meant to mimic real woods and trees. Each species includes a log, planks, leaves, and sapling. Additionally, 9 of each new wood type, as well as the 6 vanilla types and homogenized wood plank (made from 1 wood plank of each of the 6 vanilla woods) can be crafted into reinforced wood planks, which can be used as compact storage of wood, or a tougher building blocks.

Each of the 9 types of tree introduced are found in their own biome, but these biomes do not exist naturally in the Overworld, but rather, in their own dimension. This dimension can be accessed by stepping through a portal made of reinforced homogenized wood planks. The portal is lit with a riftcutter- a dagger that can be crafted with a blaze rod, 2 gold ingots, an iron ingot, and an eye of ender.

The saplings in this mod can be placed like blocks, but they will not randomly grow into trees like the vanilla species. You HAVE to use bonemeal (technically any  kind of dye) to make them grow.

All of the new trees are based on actual species:

Gen. 1 Trees- These are the original 9 species of wood from when the mod first came out:

Hawthorn- yellow and pale orange-yellow alternating wood. Rough grey bark that will damage you when mined. Found in the Brambleyard biome

False Lignum Vitae (based on real-life Verawood)-Wood is a lighter color varient of true lignum vitae. Bark has the same look as true lignum vitae, but is entirely brown. Found in the False Eden biome

Rengas- Darker greyish-pink wood. Rather smooth grey bark with spots of green and red. Found in the Red jungle biome

Gen 2 Trees- These are the new species introduced in version 1.2.0:

Bloodwood- blood-red colored planks. Bark is dark greenish brown. The heartwood is oak-like, but has blood-like sap near the bark. Found in the Forest of Blood

Coconut- vertically-oriented brown, grainy wood. Bark is brown, smooth and ring-like. Found in Coconut Beaches. The sapling can be crafted into food

Crack Willow- Alternating pale green and tan planks. Bark is grey with hints of green and is very rough. Found in the Willow Swamp

Mangrove- very dark blueish-brown planks. Bark is smooth and very pale with flecks of orange. Found in the Mangrove biome

Paperbark- Dark ruddy brown planks. Bark is brown with tan papery frills, and can be sheared once for 4 sheets of paper. Found in the Crimson Forest

Pine- Very light yellow, skinny planks. Bark is scaly and is grey with re patches. Found in the Evergreen Grove

Wattle- greyish orange planks, similar to eucalyptus. Bark is rough and dark brown with flecks of white. Found in the Outback

Petrified Wood- Ancient wood that has turned to stone. Found underground in small clusters below  y=50 and in the Petrified Forest. Cannot be turned into planks and must be mined with a pickaxe

Gen 3- No new species were added, but new blocks and items were:

-Beams can be made for all wood types, including petrefied and vanilla. Made with two slabs of the same wood.

-Petrefied Wood Planks- made with a single petrefied wood

Raw and cooked Venison- raw meat is dropped by deer.

Bearhide- Black and brown varients. Both can be crafted into leather or wool of the same color.

Crab legs- dropped by crabs. Eating it makes you nauseous.

There are currently only 7 mobs. All of them can only be found in the Natural Woods dimension

Gaansey- Added as a credit to Gaansey for his assistance with the vertical slabs (slices). Gaansey carries an iron axe, is passive, drops spectral arrows, and is found in the Eucalyptus Forest biome.

Black Bear- Found in various biomes. It drops black bearhide, which can be crafted into leather or black wool. They are neutral towards players and aggressive towards rabbits

Grizzly Bear-Found in various biomes. It drops brown bearhide, which can be crafted into leather or brown wool. They are neutral towards players and aggressive towards deer

Crocodile- Found in various swampy biomes. It drops vines and rarely prismarine crystals. They are neutral towards players and aggressive towards chickens

Crab- Found in various sandy biomes. It drops crab legs, which can be eaten raw, or cooked. They are neutral towards players and aggressive towards squid

Deer- Found in various  biomes. It drops raw venison, which can be eaten as is or cooked. They are neutral towards players and are afraid of their movement.

Kangaroo-Found in the Outback biome. It drops rabbit hide. They are neutral towards players and aggressive towards spiders

All of the logs, saplings, beams, and planks can be used as fuel in furnaces. Reinforced planks cannot.

All planks can be used to make sticks and chests, but only if ALL other wood used is the same kind.

Once I give this to a successor, all future updates will be done through them, if they choose to make any.

-Crafting tables made of each of the new wood types.

-Fixing two known bugs- New mob models do not animate at all, and kangaroo model has no ears.

Oooh really like the look of the new woods, hawthorn has to be my favorite though. Great Mod

What are the Easter eggs??

Homogenized is a very interesting name!

Here's an idea! Add structures with your new woods!

@#7 I would if I could get structures to work.

Hey Eonaut, I have an idea for your mod, in a few days I will be releasing a Vertical Slabs mod and I want to help you make vertical slabs and normal slabs for your Natural Woods mod. Why you may ask? Well simply I absolutely love this mod and I really want you to expand it, I would also love to become a team with you as you are an excellent mod developer. In fact I can make some some structures for your mod if you are having troubles with them. Now you don't have to reply immediately, feel free to wait until my Vertical Slabs mod has been released for you to see how they work, if you were wondering how these slabs rotated due to MCreator limitation, simply right click them and well yeah it'll rotate, anyway all the best! Gaansey ( or Damian) Also I can make a discord to if you would like! :)

Also I have some wood ideas too!

And congrats on your Hodge Podge Mod II again :D

@ Gaansey
I would love help on this. I am going to be very busy in the next few weeks, though, so I cannot guarantee a quick response.
Your idea sounds really cool though, and I definitely want to see it through.
I would not mind if you helped with textures, but I might end up editing them slightly.
You can send me your ideas through a forum post or e-mail,whichever you prefer

Also, I have made some alternate tree designs, which would spawn as structures, but I have not yet tried to implement them. I would like to see what structures you made though.