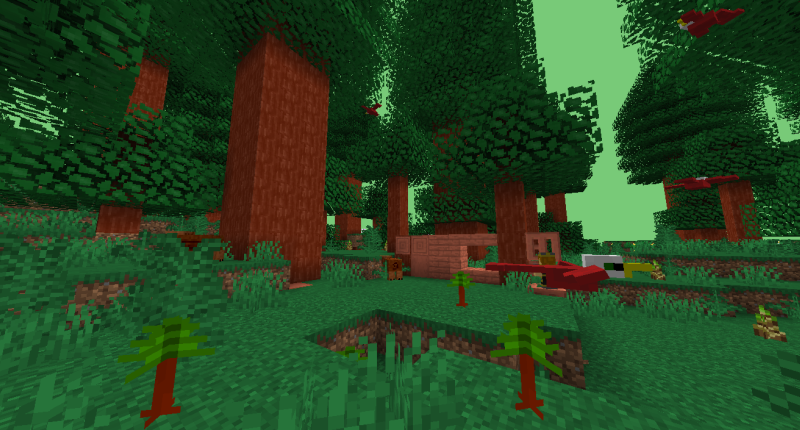 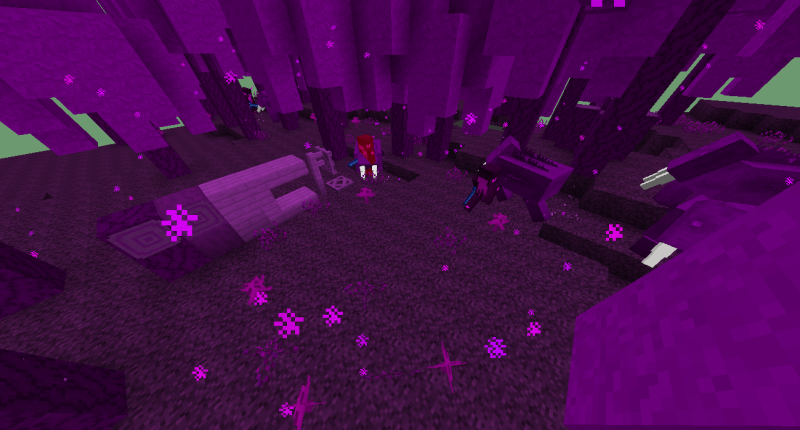 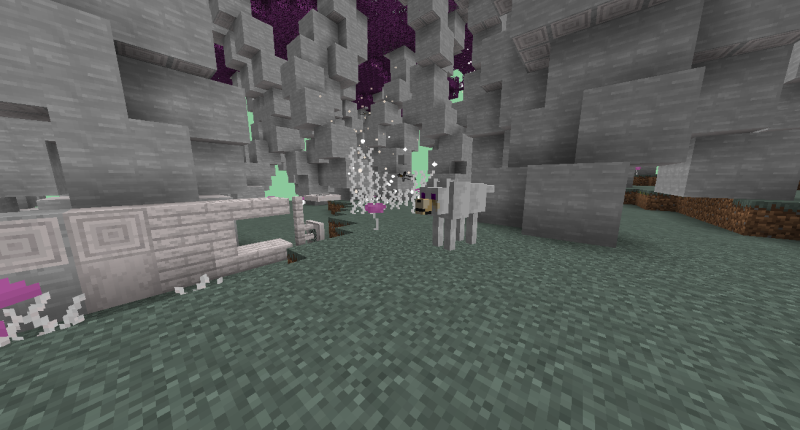 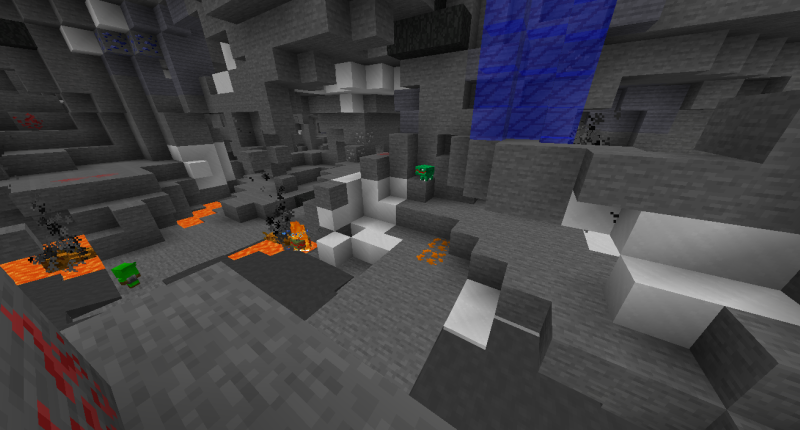 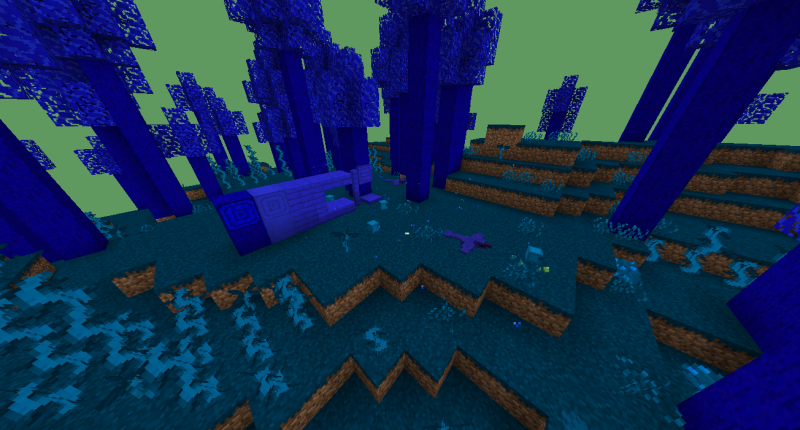 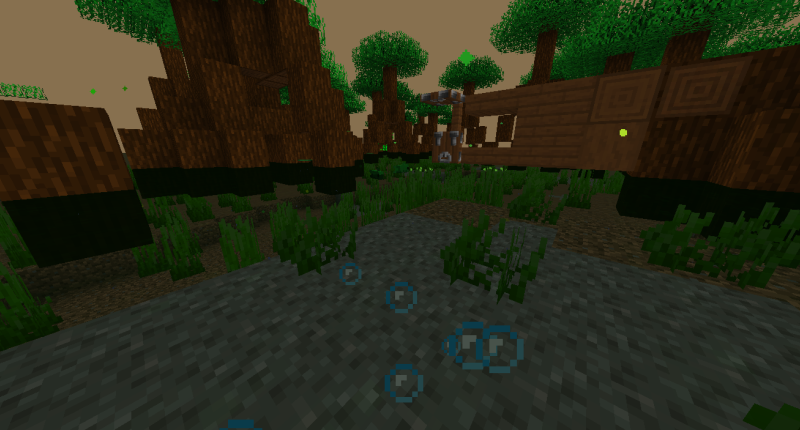 Tibork is a new dimension with over 80 blocks, 18 entities, 36 structures, 2 new armour and tool sets and 100 recipes.

The mod is a little too large to go over everything individually (380+ elements) and also a little pointless as a lot is self explanatory; if you have any ideas, suggestions or bugs you've found please let me know :)

Once you arrive you'll notice you're in 1 of 6 biomes listed below:

The Redwood Forest, inspired by the real Redwoods of California, giant 2x3 trees loom over smaller 1x1 Redwoods and smaller, functional saplings. Bamboo, ferns, wild boars, birds all spawn here along with the occasional large rocks, this is a relatively mountainous biome and is the only place dwarves can spawn on the surface. This is by far the most peaceful biome, especially with diligent dwarves attacking all mob type entities in sight. Be careful though, dwarves won't hestitate to pick a fight should you hit them!

The Lavender Oasis, this is mostly a reskin of the new Warped and Crimson biomes from 1.16 where Shroobmen with Cobalt Swords fight Behemoths among the trees. Both of these are naturally aggressive and make the biome particularly dangerous. This too adds a new wood type, used in the (so far) hardest dungeon, the Lavender Citadel.

The Wistman Forest. This biome has a dense yet airy feel to it with a new white wood set, packs giant wolves (that I wanna make tameable and rideable in the future :DD) and occasionally ghosts with iron swords. These are both aggressive but relatively easy to fight/avoid for experienced players. Underground, the Wistman Forest is home to the largest populations of Goblins and Spear Goblins, essentially worse baby Zombies which have their own traps and dungeon.

The Mangrove Forest, this is the most work in progress biome, it adds piranhas, swamp fish, frogs and swamp monsters (but currently frog spawning is disabled). This is similar to the swamp in it's generation but has a very unique mangrove tree and smooth brown wood type. A lot of stuff poisons/weakens you here and the water makes it harder to navigate.

The Flower Meadow. Not a forest, very rare, mostly just exists to look pretty. This is the only place you can find Illusioners on their new structure. Spawns Llamas and Birds too.

After a minute or 2 you will no doubt have punched a tree or 2 and aquired some wood. This dimension is mostly made of hardened stone, a slightly harder and darker version that also drops cobble (might change the name or the drop idk) and you'll no doubt see it, along with 4 other rock types (each with its own bricks and spawning mechanics): marble, pumice, limestone and slate (which has slate cobblestone too).

After going down a cave a bit you'll probably see your first ore too of which there are 6 new ones, Cobalt, Ardite, Ruby, Azurite and 2 versions of existing ores, Iron (which is dropped in nuggets here) and Redstone. Cobalt has to be smelted is used for creating tools and armour between diamond and iron (spawning accordingly); Azurite is found exclusively in the Bluewood Forest and can be used to craft Azurite bricks (which I plan to make some kinda sky dungeon out of); Ruby which is found only in lava and is guarded fiercly by one of the new mobs, magmafins, this is very hard to get and is used to craft stronger than diamond armour; finally Ardite which usually explodes when mined and drops ardite dust used to craft ardite ingots, in turn used to craft better than diamond tools.

Along with magmafins, goblins and dwarves, there is a chance for Anklors (based of Mob C) to spawn when you walk on hardened stone and nibble your feet. Anklor nests spawn frequently underground and drop phantom membranes. Magmafins drop magma cream and magma, goblins drop ingots (mostly iron) and spear goblins drop javelins (a new throwable weapon) and goblin bombs (basically uncraftable dynamite).

You'll also find cave crystals which load in weirdly and have to be mined top down. They drop crystal shards which are a 4-item fuel source and are used in a few recipes.

There are plenty of other features too, listed in no specific order here:

Osmium Hammer and Javelin - different weapons with situational uses, aquired through trading with dwarves (right click on them with cobalt, they give you something in return, taken pretty much verbatum from 1.16)

Oil - A new liquid that turns lava into obsidian, gives entities in it weakness and blindness, flows 8 blocks and can be bucketed as a fuel source (bucket is consumed) but not placed down

The Spawnstone - used to set spawnpoint in Tibork by right clicking

Stripped Logs - All custom logs can be stripped with any axe

Boar Chops/Cooked Boar Chops - the best food source in the game, gives strength for a bit, wild boars are quite tricky to kill though.

Lubaradinium - alright food, dropped by behemoths, unique in that it can be eaten even if you have full hunger, allowing you to fill your saturation bar.

Thanks for reading too :D

Very nice, great description. Always good to see someone putting so much work into a dimension mod :)

i love this !!
better than i thought it would be.
i can see how you recycled the behemoths lol
maybe make the caves have less total colours?

One of the best and most detailed mod pages on this site! Great mod, too.