1.XX - The Update that Changed the End 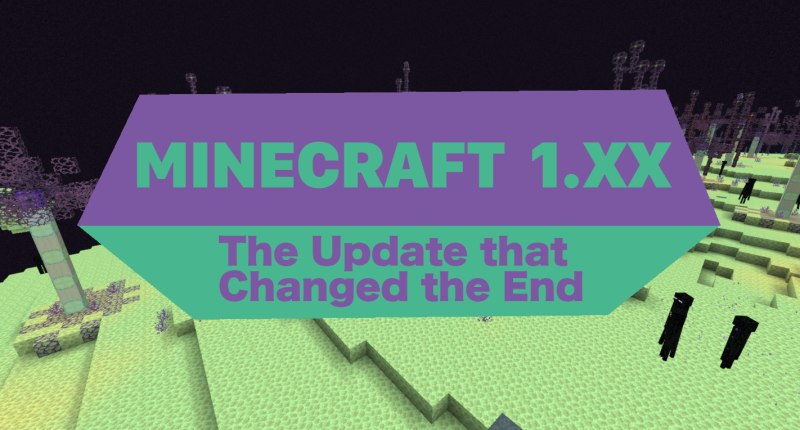 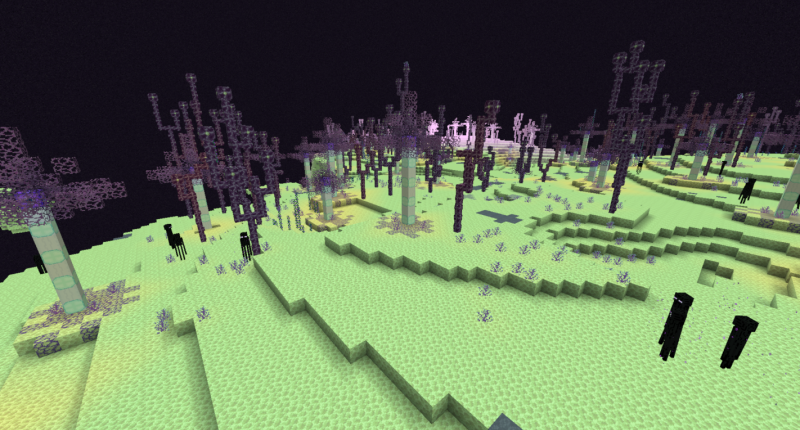 A view of a Neural Forest 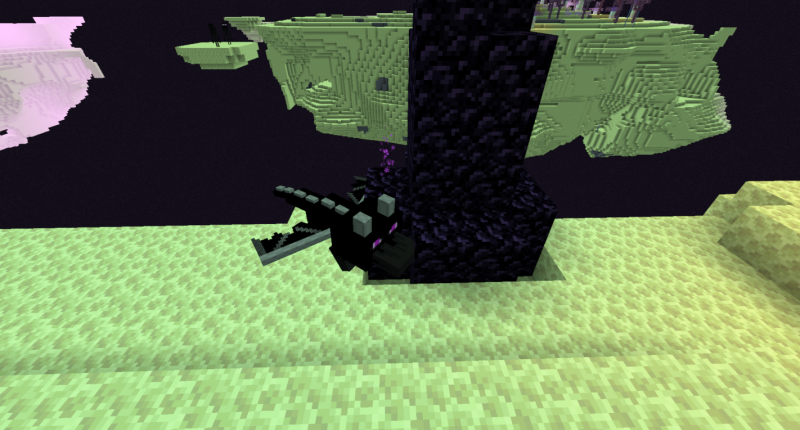 A Draglet next to a medium Obsidian Spike. How cute! ... ? 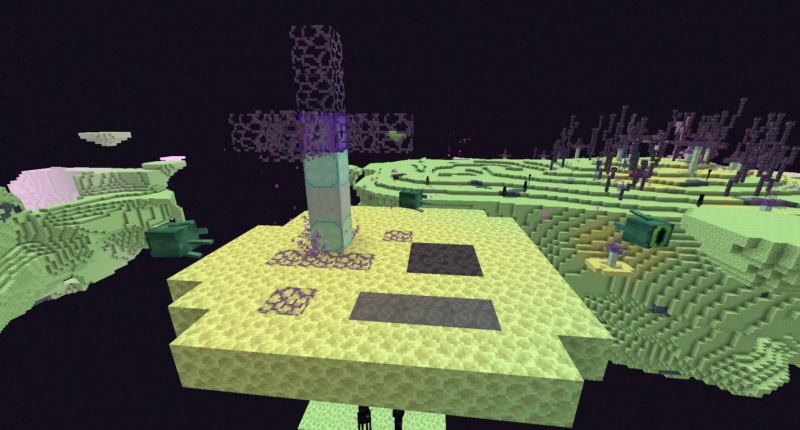 A few blocks from the mod, including the Neuron, Eyestone and Eyesand.

Note 1: The description and mod are outdated, I have paused progress on the mod

Note 2: This mod is not completely finished, I just wanted to get my ideas out. All features below a marker are still only ideas, and are not in the mod currently. Custom sounds have not been made yet.

Eye Drops - Fall into the void while fighting a Scryeye

In an Eyesland Far, Far Away - obtain Chronic Debris

A new type of ore that spawns in the End and around End Neurons. Can be clicked with End Shears to convert to End Stone and drop one Dendrite as an item. When mined without Silk Touch, it drops End Stone. It can be used as fuel and crafted into String.

Since MCreator doesn’t suppport new biomes in the End, the Neural Forest merges with the End Highlands as the lively, populated biome of the End. Endermen and Scryeyes live here. Great for starting survival in the End and organic resources.

A type of tree-like structure found in Neural Forests, or grown by using Bone Meal on Terminal Roots. The ground around it is covered in Dendrite and Terminal Roots. Its trunk/stem is made of Axon blocks (alternating between myelinated and stripped), and its “leaves” are made of Cyton Branches, with a single Endlight in the center.

A plant similar in appearance to Dendrite. Spawns around Neurons, can be grown into Neurons, and can only grow in low light levels (since MCreator doesn’t support custom growth blocks either). Good for experience, literally. Drops 2 Dendrite when mined without End Shears.

Blocks that make up the “stems” of Neurons. They function as with Logs/Stems and Planks. They can be crafted into the same items as planks can, but not into Wood/Hyphae. However, they can be stripped with an Axe, dropping 2-3 Myelin. They can also be used as fuel.

Blocks that make up the “leaves” of Neurons. They are transparent, and drop 2-3 Dendrite when mined without Silk Touch or End Shears. Can be crafted with 4 Dendrite. Good for bridging, if you don’t have a pet Pivoid.

Blocks that grow in the center of a neuron’s cell body. They glow brightly, and drop themselves when mined with a hoe.

Obtained through stripping Axons. Can be combined with Shulker Shells to craft Shields.

A new hostile mob that spawns in the Neural Forest and rarely elsewhere throughout the End. It can fly (slowly) through the air to attack the player, dealing 1 heart of damage. Once killed, it drops 0-1 Eyes of Ender, 0-1 Scrying Obsidian, 0-1 Red, Yellow, or Blue Dye, and rarely a Book enchanted with Interlocking (see Telehole).

A new plant found in the Neural Forest. It drops Enderberries when picked. Enderberries can be popped, and when eaten (very quickly!), restore 1 bar of hunger, but can be crafted into End Fruit Jam, which heals more. It can also be used as a fuel. Like Terminal Roots, it can grow in low light levels. Unless sneaking, if a player walks into an Enderberry Vine, they teleport straight to the top.

A food item crafted with Enderberries, Chorus Fruit, Sugar, and a Bowl. When eaten, it leaves the bowl and restores 3 1/2 bars of hunger. It does not teleport the player.

A barren biome, with a few mineral resources. Only Endermen spawn here.

A block found in the trough of the Obsidian Grotto, and in patches around End Barrens. Can be crafted into cobblestone.

A new, medium rare mob that lives in the Obsidian Grotto. It resembles the Ender Dragon in appearance, and poses a new threat by being able to shoot stinky fireballs. It will attack Players and Scryeyes. On death, it will drop 20 Experience, an Ender Charge, sometimes an End Crystal, and rarely its head or egg.

A throwable ranged item dropped by Draglets. It can be crafted using a Fire Charge surrounded by Dragon’s Breath. It can also be used as fuel for Teleholes. When an Ender Charge crashes on a block, it lights that block on Dragon Fire, a purple fire variant only obtained through this way. It deals 2 damage every half second, and can be used as a source of Dragon’s Breath.

Can be crafted with Shears and Myelin, or two Myelin. Used to scrape Dendrite off of End Stone. When used on an Endermite with Left Click, it will drop 0-1 Mite Scute and deal 4 damage to the Endermite.

An item obtained from hitting endermites. Are used to craft Elytra Segments.

Crafted from Mite Scutes, Myelin, and Phantom Membranes. Can be crafted into an Elytra by placing them on the sides of the crafting table, with the top space occupied by Dendrite and the center by an Endlight.

Crafted with 6 Scrying Obsidian, 2 Eyes of Ender, and 1 Ender Charge. After setting a teleportation spot with a Telehole Anchor, the player can right-click a Telehole to teleport to the Anchor, taking the Telehole with them. A Telehole can also be enchanted with Interlocking in a Crafting Table, which allows the player to teleport without having to place down the block.

Crafted with 6 Scrying Obsidian, 2 Ender Pearls, and 1 Cyton Branches. With a Telehole in hand, the player can right-click the Anchor to set the position where the player can teleport with that Telehole.

A common ore found in the Obsidian Caverns. When mined, it drops Obsidian.

A new building block crafted from 4 End Stone Bricks and 2 Obsidian. Has three stages, one for each time it takes a blow from an explosion. Unless broken with Silk Touch, it drops nothing. Blast Bricks can be repaired in a crafting table with End Stone Bricks.

A transparent block commonly found as an ore in End Barrens and Obsidian Grottos. When mined with Silk Touch, it drops itself. It can also be smelted from Eyesand. Because of their transparency, Eyeglass allows the player to see Chronic Debris.

A rare ore that spawns singularly in veins of Eyeglass Blocks. It can be smelted into Telebar Scraps. Unlike Ancient Debris, it is only slightly more blast resistant than Eyeglass, but is very hard.

Can be crafted with four Telebar Scraps and four Obsidian. It can then be combined in an Obsidian Smithing Table (currently very bad) with Diamond gear (tools, boots) to make Telebar gear. Telebar tools have extremely high attack and mining speed, but are otherwise not much of an upgrade from the Diamond tier. Telebar boots give Speed II and Jump Boost II for as long as they are worn.

A block of solid Telebar for anyone who wants to show off. It can, like Blocks of Netherite, be used as a beacon base. Unlike Netherite, it will grant the Speed effect under a beacon. (will use warped_wart_block as map colour in 1.16)

A decorative block that can be crafted from 9 Myelin, but cannot be crafted back.

“Ore” blocks that spawn singularly, covered by blocks, in Obsidian Grottos only. They can be mined with a pickaxe. When indirectly touching a Telehole Anchor they can be lit with Flint and Steel or an Ender Charge to turn into Refreshed Portals, or lit again to turn back. Jumping into a Refreshed Portal takes the player in and out of the Nether (Flint and Steel) or End (Ender Charge).

Additions below here are not in the mod yet.

A new passive mob that spawns in the Small End Islands and the Central Island. It strides through the void as if it were made of solid blocks. Very rarely drops a Shulker Shell. You can ride Pivoids (to prevent ugly bridges), but you can’t control their flying height. In the overworld, they turn upside down, unable to be ridden.

A new mob that resembles a Shulker riding a Pivoid. Spawns rarely in the Neural Forest. Wandering Shulkers are not separate entities. If one dies, the other will too.

A special lever crafted with Scrying Obsidian, an Eye of Ender, and a Stick. Functions like a Telehole, except with Redstone signals. To be added.

Crafted with Scrying Obsidian, Cyton Branches, an Ender Pearl, and a Stick. I think you get the idea.

Door & Trapdoor variants crafted from Axons. To be added.

A special sign crafted from Axons and an Endlight. Text is not immediately shown, instead you have to right click the sign for text to appear telepathically on your screen. To be added.

If you have any suggestions, criticism, or glitch reports, post it in the comments. I tried to make everything Minecrafty and useful to gameplay. Thanks for reading/downloading this!

1.1 - Added some new ideas, removed Obstructions and replaced them with Draglets, added Draglets and Ender Charges.

Excellent mod! Or should I say endcellent.....

lol my mod includes so many more puns than that comment

Nice mod but i have a little question: which program ya used for making an image? (just seems that MS Paint used)

I used GIMP (not Paint), but some of the textures were based off of vanilla.

oh, you mean the thumbnail? that was made using gimp, but it's still just as bad. i changed it, though.

I think you should update the thumbnail, the main image is the first thing users see and they can have a bad impression on the mod if it's a bit messy (even if the mod itself actually is good)

good idea, i should also add more images in total