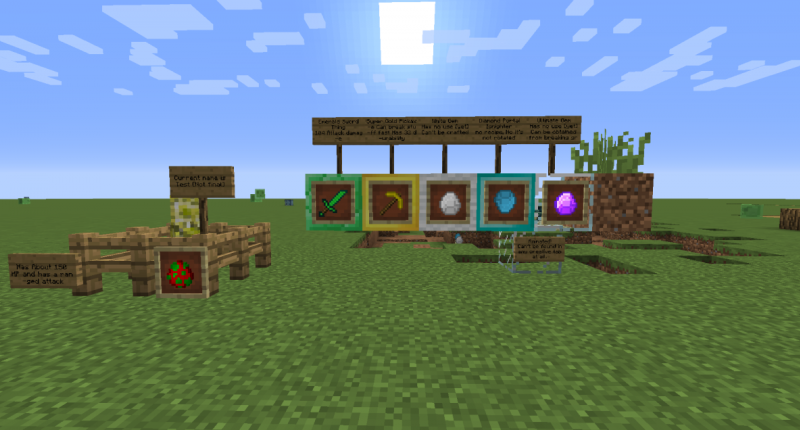 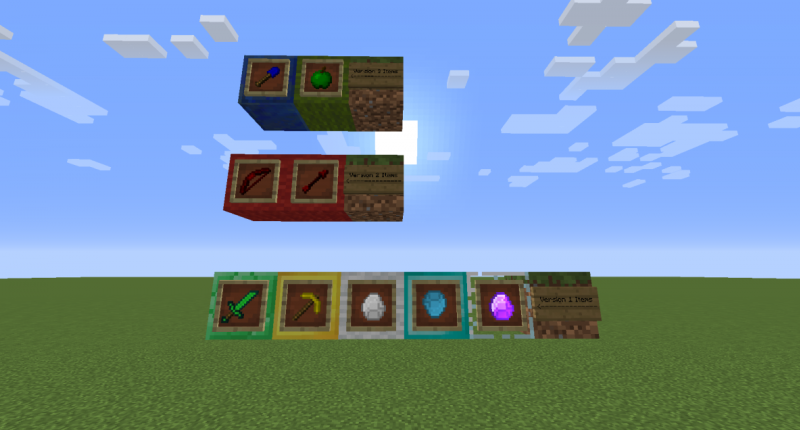 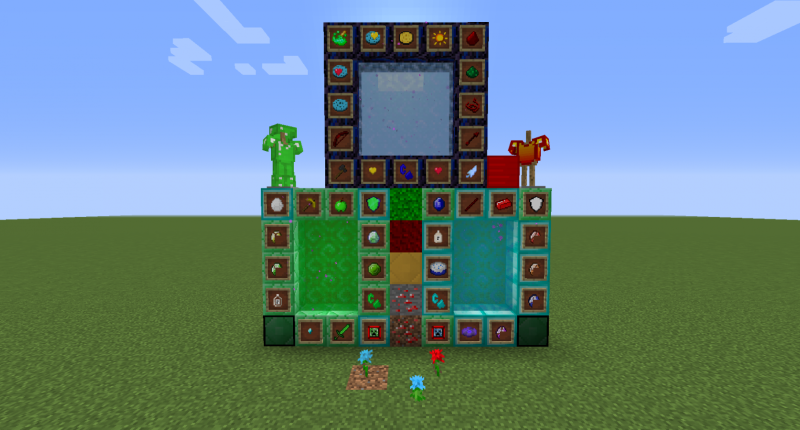 email somemodmcreator@gmail.com if you want anything added to the mod!
Hello. Welcome to my mod. In this mod I basically add whatever I feel like.

There is very many features in this mod.

9/3/2019: Today I put the stuff that's in the different versions in the changelog instead of the description and I added a description.

Version 1 Features: an Emerald sword, a very good pickaxe, a mob, 2 gems, and a dimension.

Version 2 Features: Made the mob have 200 hp, renamed the mob, added 6 new biomes, a red bow, red arrows, and the ultimate gem now does stuff when you hit mobs with it.

Version 3 Features: renamed the mob again, made it's spawn egg's colors resemble the mob more, made stuff craftable,  added green apples, added a shovel, and made the pickaxe have more durability. (I forgot to make the green apples name be colored also if you're wondering how to make your items color coded do §a-e or §0-9).

Version 4 Features: Added a new mob, added a new food, a new block, a new biome, and you can use green apples to craft golden apples.

Version 5 Features: Made the white gem do stuff, added 6 new items used to craft the ultimate gem (plus the white gem), added a diamond biome (used in diamond dimension), added red gravel, red flint, a red stick, changed red bow and red arrow crafting recipes, made it so the food added in version 4 has a crafting recipe and when eating gives you a bowl, added a new mob, and replaced all the drops of mobs added in this mod with the things used to craft the ultimate gem (one as a normal drop and one as a rare drop, excludes the white gem), added a recipe for the white gem, and added an item you can only get via /give.

Version 6 Features: Added another mob (except this one is friendly), added a fuel source, added red string, changed red bow recipe, added an item that allows you to fly after being put in your inventory, made elytras craftable, and red wool can be crafted using red string.

Version 6.1 Features: Ultimate Gem is now able to be found in the creative tab, the item that allows you to fly doesn't force you to fly until you remove it, and another formation of 4x4 red string can be used to make red wool.

Version 8 Features: Added armor, changed some of the words you need to type in the /give command to get certain items, and changed which version of mcreator I used to make the mod.

Version 9.1 Features: Added a surprise (not generated in the world but is craftable), fixed some bug, i think this was the version i added the structure in, and removed some textures that weren't used

Version 9.2 Features: Emerald dimension, emerald biome, a potato block, and a blue cake looking thing that you can't place down or craft

Version 11.2 Features: Removed a potion effect, made the other one behave properly when applied to a player, and made a new item which requires a very, very, very long time to eat, but gives the highest nutritional value MCreator allowed me to give it.

Version 14: had this for a bit & forgot what I added lol.

Version 15: added stuff, blaze rod block, reverse-crafting quartz blocks, nether wart blocks, and blaze powders, added a block made out of Blaze rods, a gem, and a new recipe for the chestplate from version 11.1 (tbh, Idk if it even HAD a recipe before). Oh and the Emerald Armor is EVEN HARDER to craft now. :) good luck.

You can read the signs to see things about stuff in the mod.

Reply to this comment with suggestions for what to add to the next update of the mod.

Okay nobody replied so i'ma put in a blue cake that you can't place down.

But just like RaolCraft 1, it has potential to improve :)