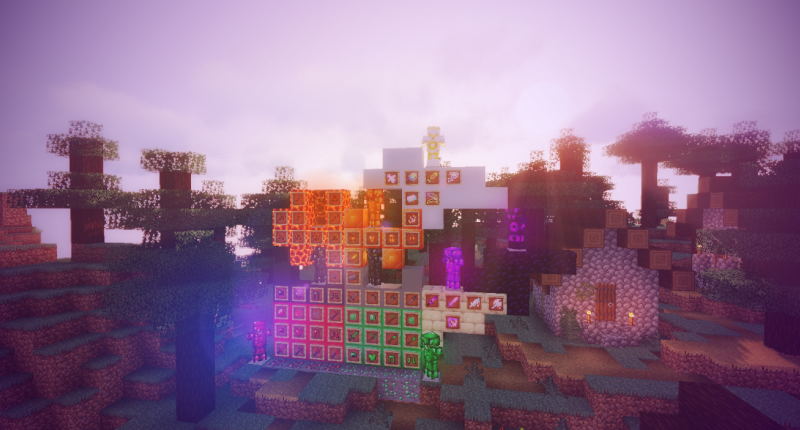 Almost everything in the mod, namely the main weapons and armors 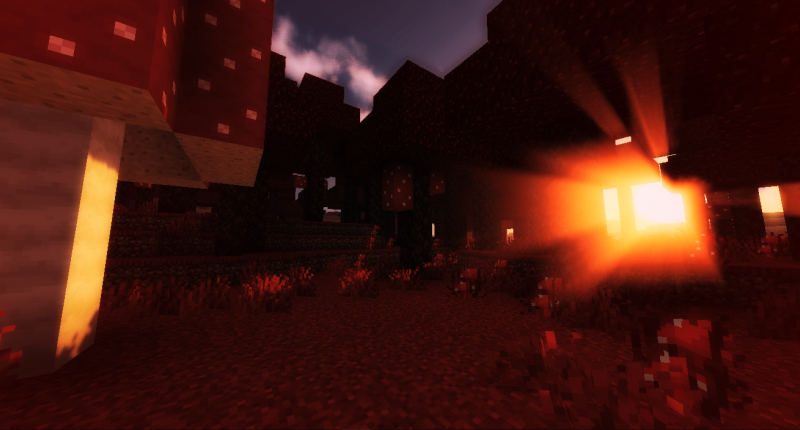 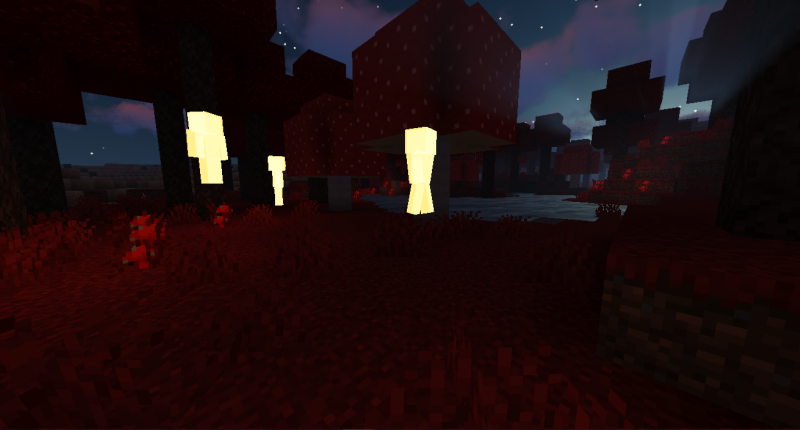 Ghosts in the Crimson Biome

Well ..... I forgot my account password (Shardox), so I'm in my old account posting this new update [1.3.20.1] I ended up losing almost 60 downloads of my mod ... now that I've explained the situation I can continue with the description without being accused of plagiarism or anything else.

official site: Click Here to go to the imperial ores mod's website (The site is out of date with current updates!)

A Mod that adds ores and some items.

This mod have +318 elements, including swords, tools, armor, entities and a new biome, among these entities are two new bosses, a semi-boss (which does not contain a boss bar) and 6 more mobs, I will show you the more interesting things from the following mod, if you want to know how to play enter my mod official website: https://sites.google.com/view/imperialoresmod/
but remember that it is somewhat out of date, I will update the even after posting this mod.

Remember to always check the changelog, there may be information that does not contain in the description.

in the next update I intend to balance the damage of the weapons in relation to the bosses, even because ... with just a few golden apples and ruby ​​items and with the feather falling enchantment in the boots you can easily defeat the Ender Dragon, it may be that after defeating the Ender Dragon you have a percentage of 10% (or 5%) to go to The Primordium Dimension (I just got this idea xD) and just there you get the ores of the mod, this would balance the mod too much and it would be like a vanilla addition, for items and blocks like hellstone ore, hell pack etc. it would have something like a kind of nether biome in Primordium Dimension, or it could even create another dimension, like UnderNether, or Hellish Nether... whatever.

I was also convinced that I could create a texturepack to overlay the items/blocks of the mod that are not updated in relation to the texture of 1.14.4, just as I tried to mention in the first comment of the mod (example: hellstone and enderium ore/emerald items and armor, ruby ​​items and armor, steel items and armor) maybe the rest I leave as is, that is, I change only the items that are in parentheses, or maybe I should just give a slight modification to all items other after those mentioned in parentheses to look more vanilla (this new texture from 1.14.4 is very difficult to reproduce, I will have to totally change my pixelart style, but I will try to adapt, if the textures look good I add the texturepack+mod to a .zip file remembering that the texture will only change the items of the mod, that is, you can use a texture under or above it that nothing will change [only the items of the mod]).

(This is not the final version of the textures shown in the image, everything you are seeing is in the pre-alpha version, can be changed or completely reformulated.)

(This is not the final version of the textures shown in the image, everything you are seeing is in the pre-alpha version, can be changed or completely reformulated.)

I am already starting, as you can see in the image, to make the Primordium Dimension, it will probably still take a while for me to finish this update, in the meantime, I will be posting images about how it is getting on.

At the beginning there is not much to do, you will usually get wood, stone, iron, etc. until you get to the diamond, after you make a diamond pickaxe you have to go to a mountain biome (formerly known as extreme hills) and get emeralds. 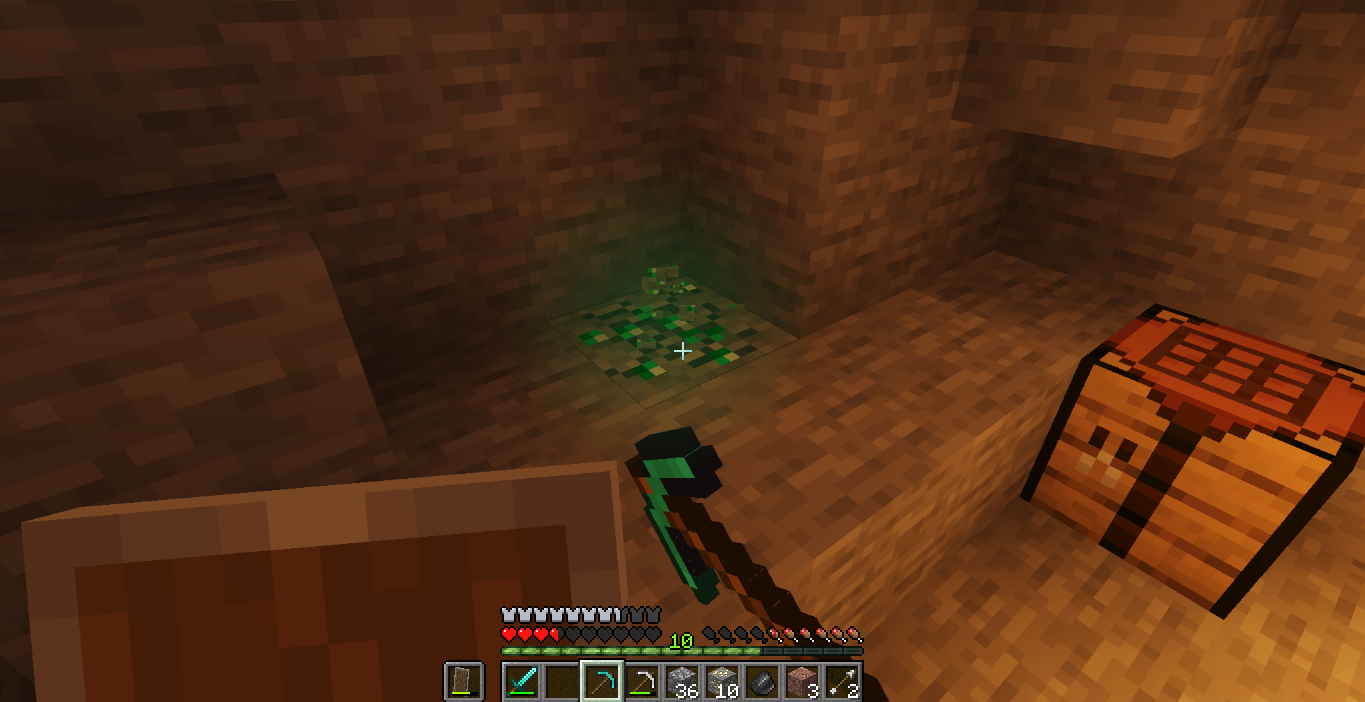 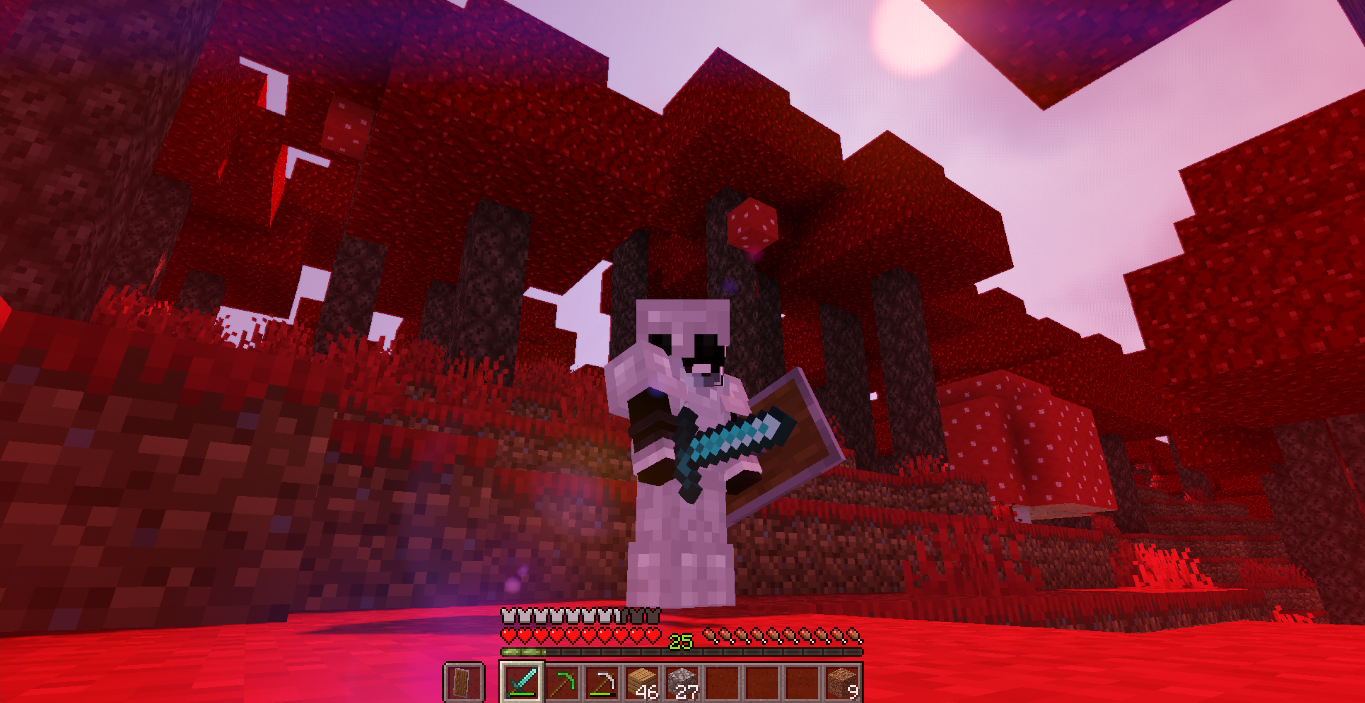 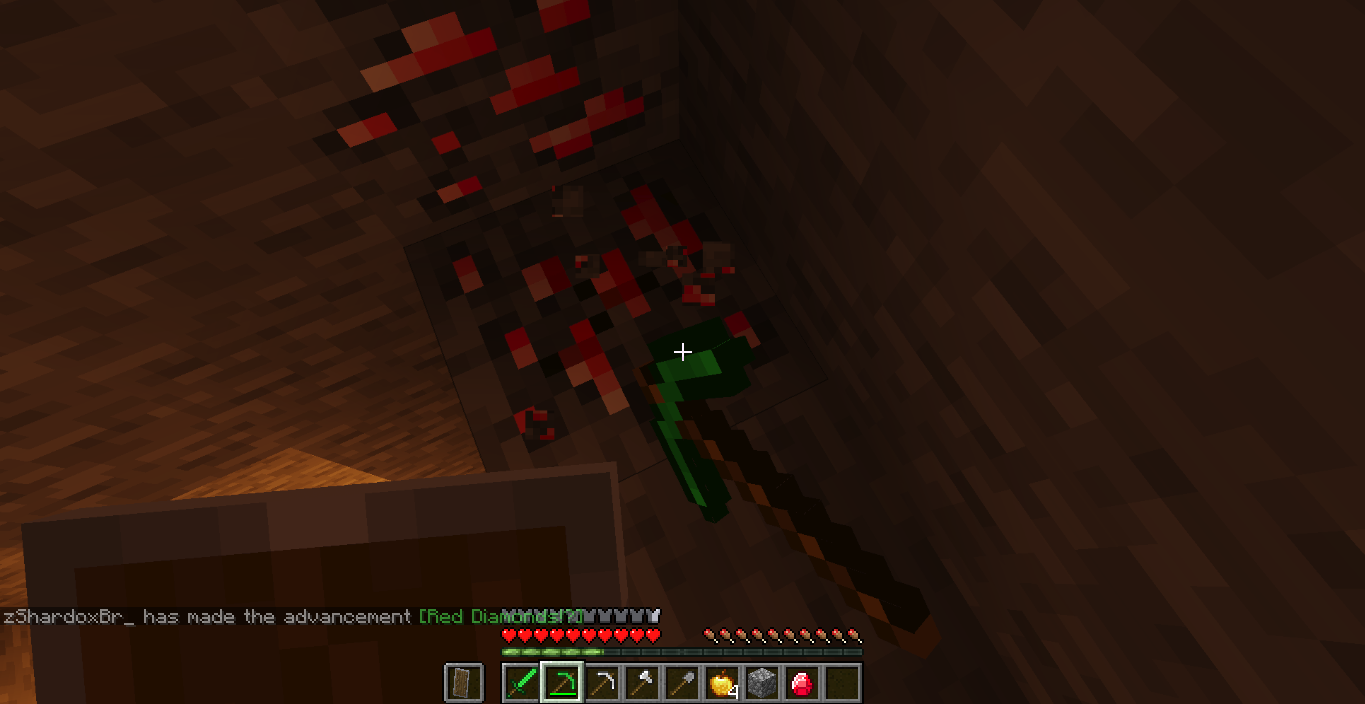 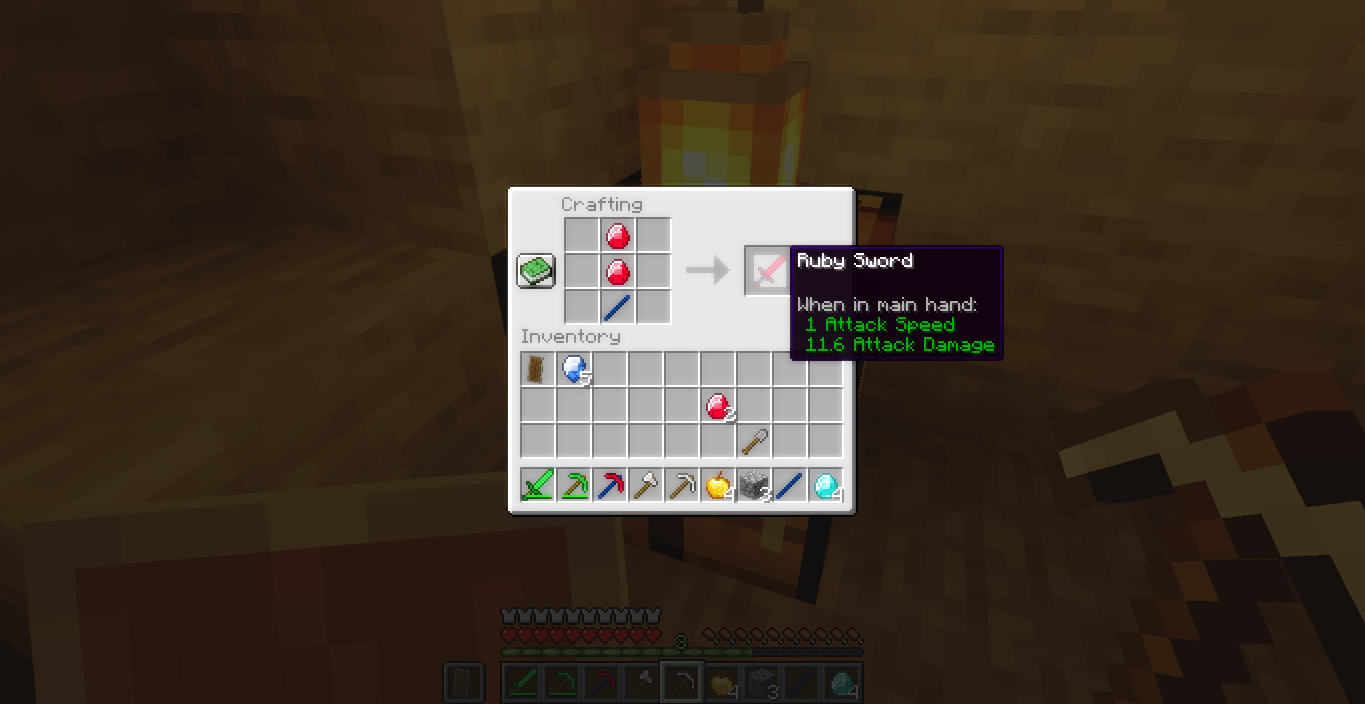 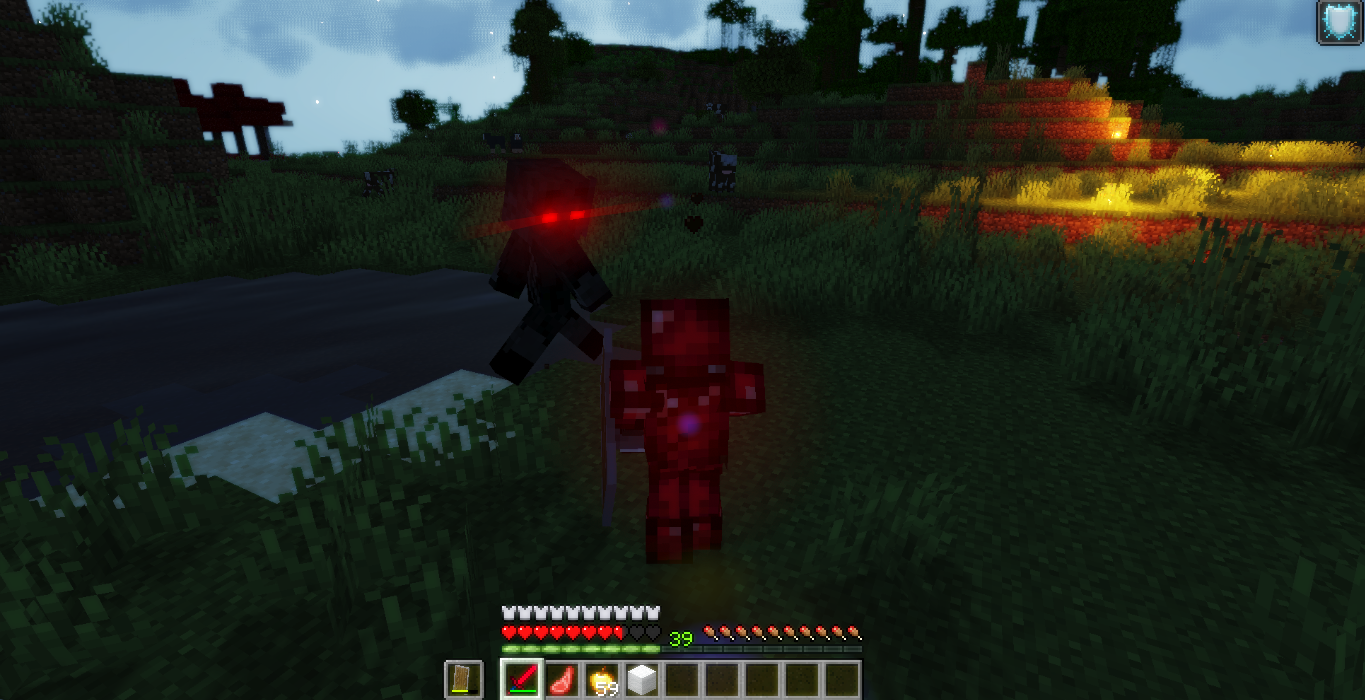 Fighting werewolves can be a difficult task, because in addition to being fast and strong, he walks in a group, like wolves, Werewolves also have werewolf pack. As you can see in the image, I summoned only one werewolf, and it was very difficult, I had to use 7 golden apples, and it also damaged my shield and armor.

We need to go deeper: after mining a lot of gold! 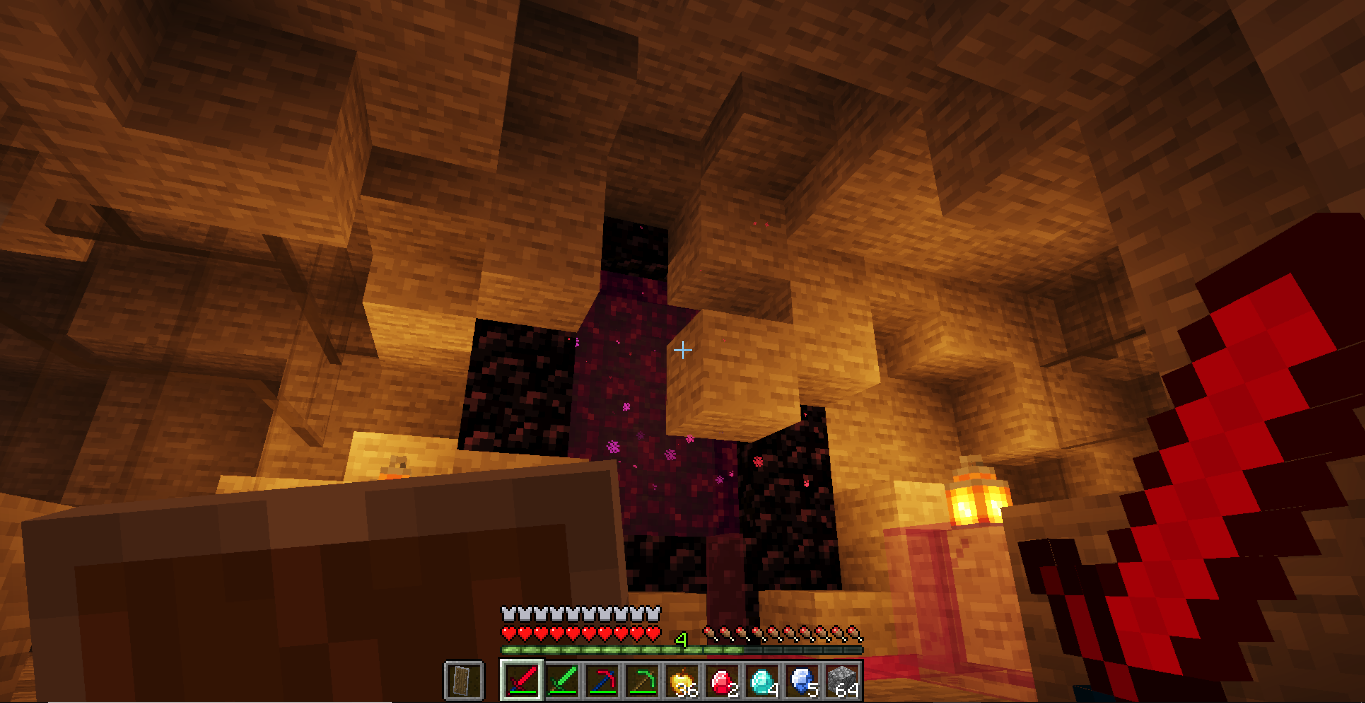 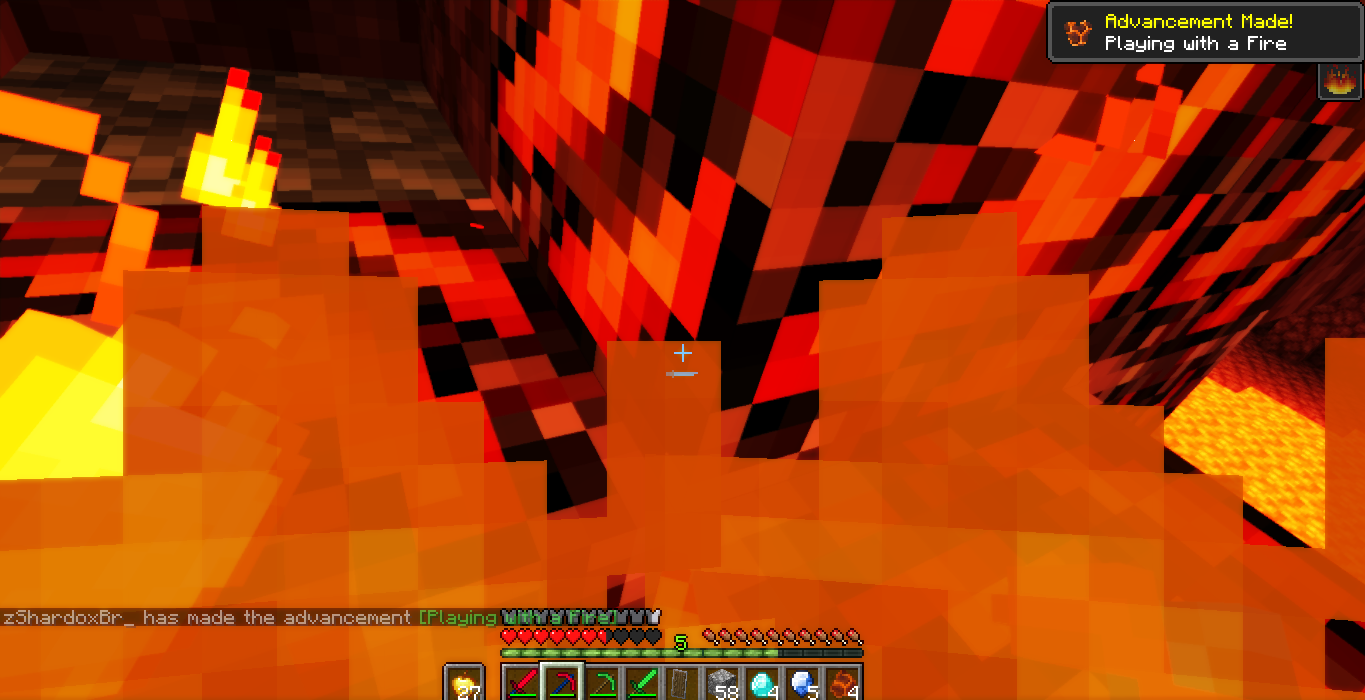 It is highly recommended that you get regeneration items before you go to mining hellstone (like golden apples), because when you start to break this ore, besides you burn infinitely (or almost) you will also die to hellblaze, effect that takes away 1 heart per hit. 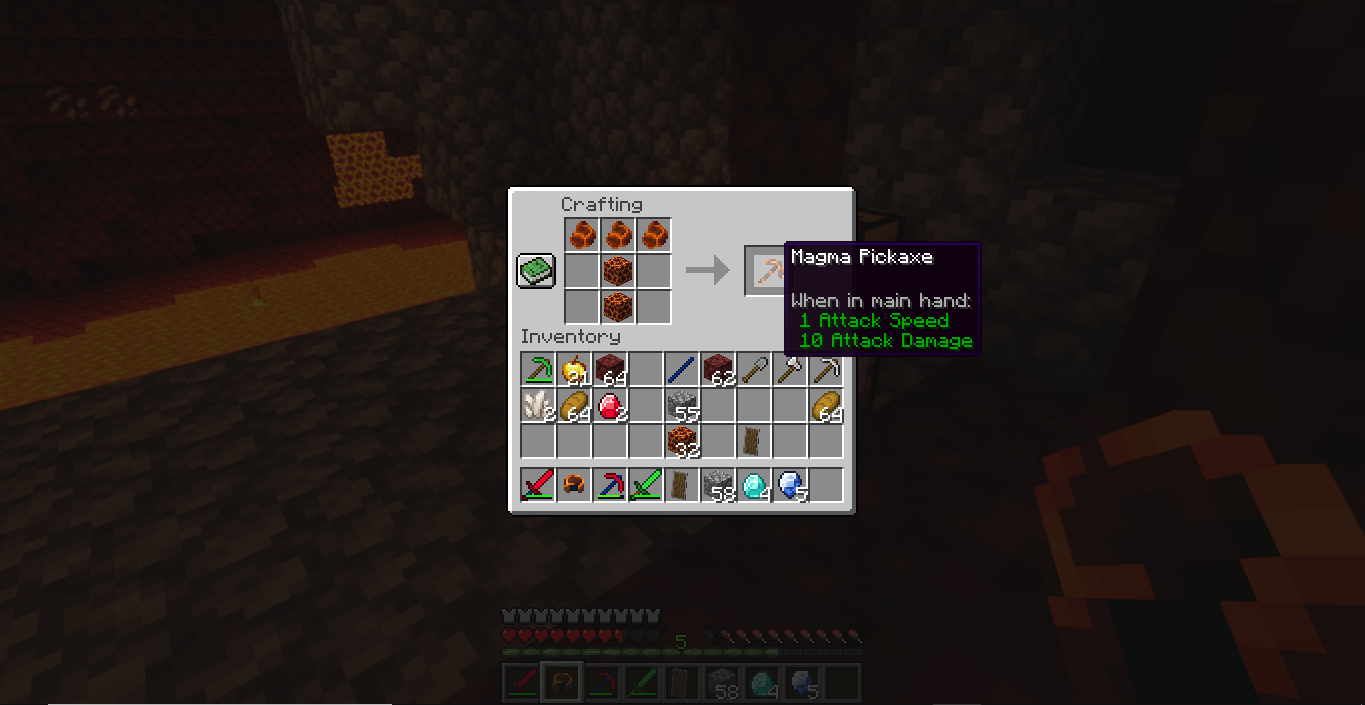 Craft the magma pickaxe is very important, because it is the second best pickaxe of the mod it can break any ore, like hellstone and enderium ore, it only loses to the obsidian pickaxe, but they are practically the same tool. 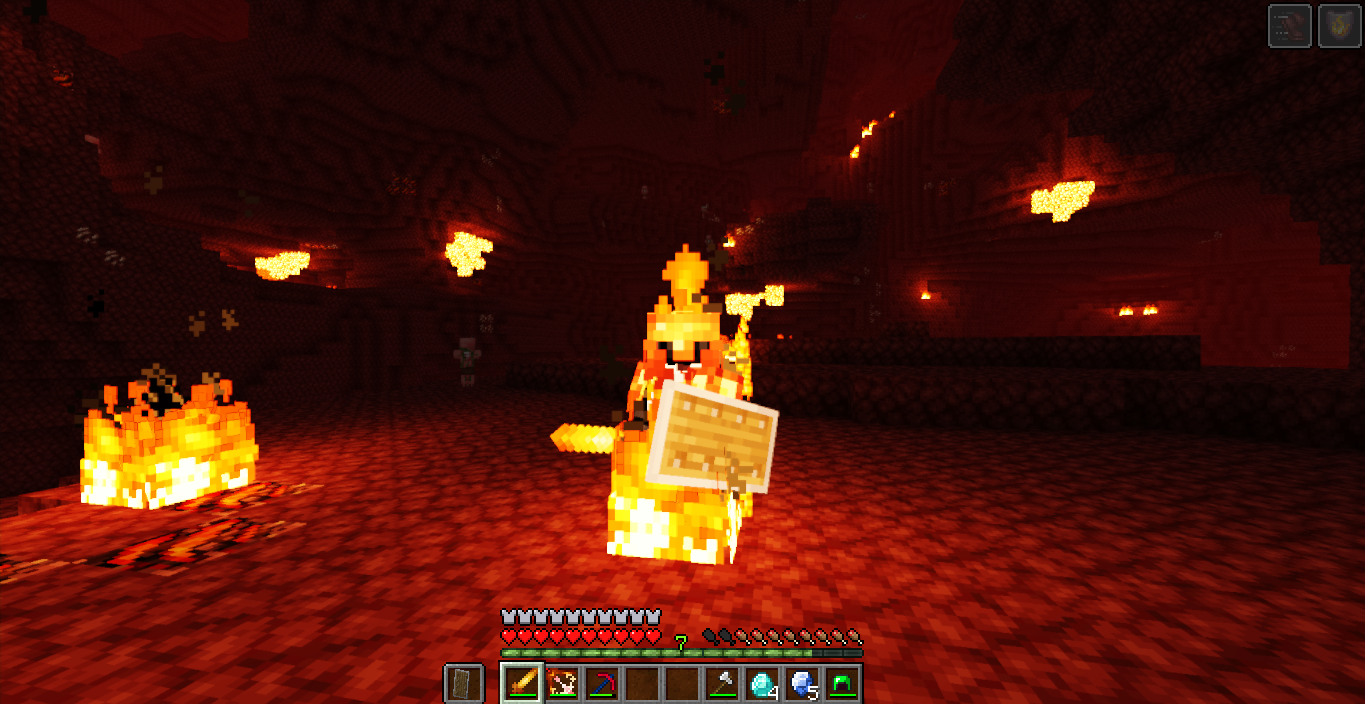 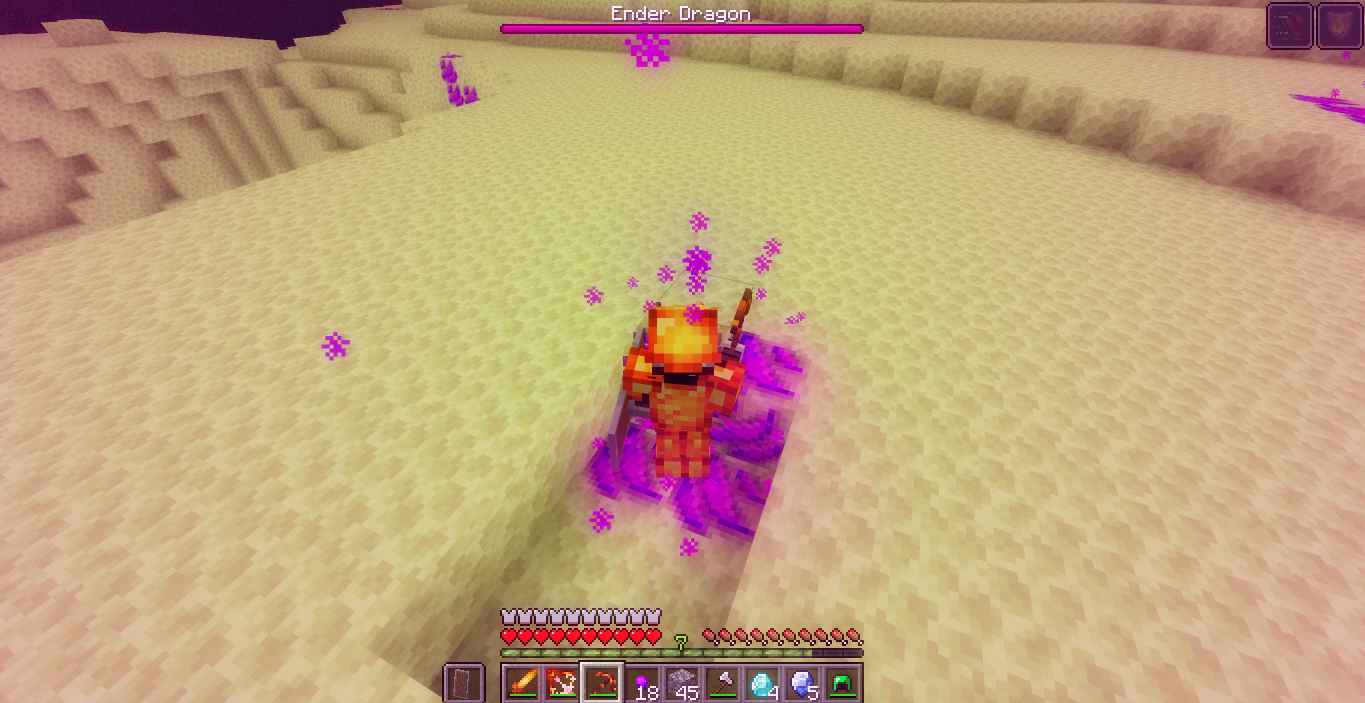 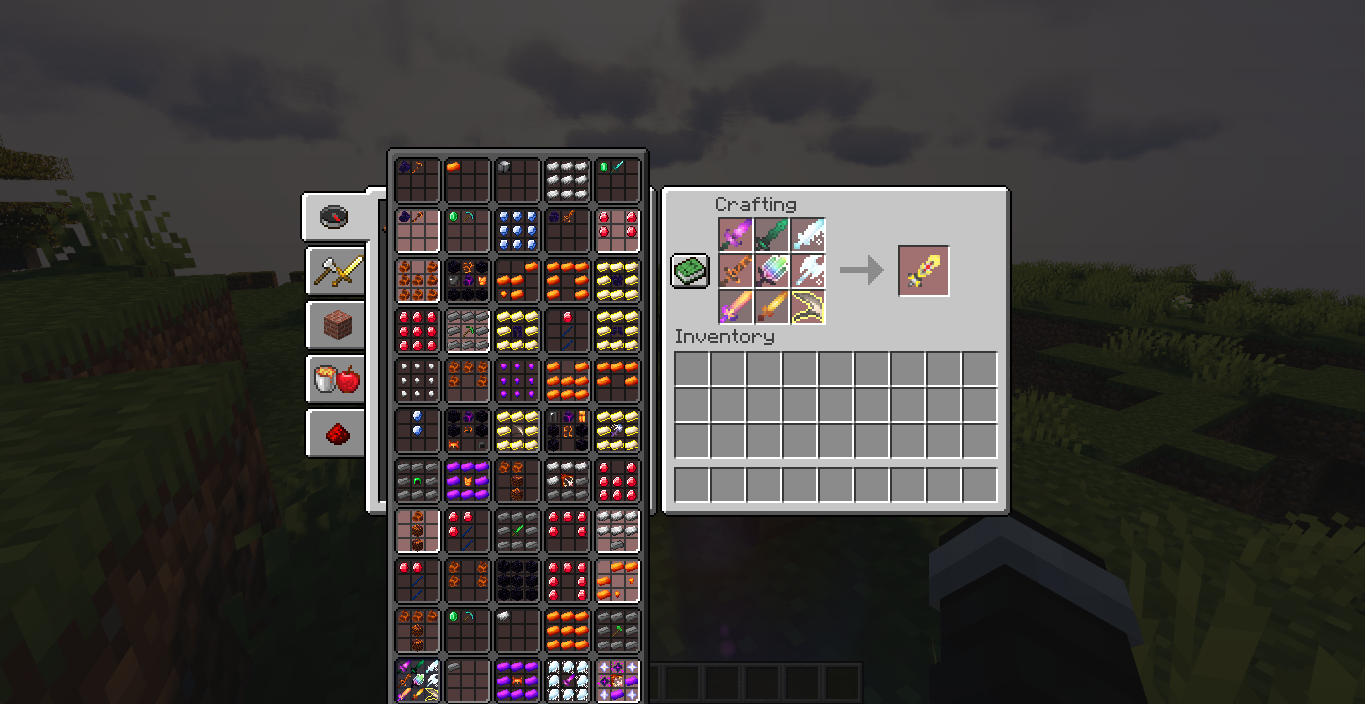 Remembering ... the more advances you complete, the more craftings you release.

[More images will be posted here in the description later]

If in the mod or description there are typos, please understand that I am not a Native American and also have no extensive knowledge of the English language.

If possible, post your opinions about the mod and suggestions about it here in the description. I will be grateful to receive constructive criticism about the mod, and I will also begin to create an overlay texture that you place over your standard texture to update the mod's outdated textures.

if this isn't a really late-game mod, make the werewolves a lot weaker. the ghosts look great! also, the tool packs aren't very creative, but i like the hellblaze effect.

Thanks for the feedback, I fixed the damage and the life of the werewolves, about the tools I really wasn't very creative when I decided to create them; I'm planning on a new dimension: The Primordium, bringing a lot more to the mod, I'm thinking of you having a 50% chance of starting in that dimension instead of the normal world (overworld) living up to its name "The Primordium, the beginning, etc. ", I intend to make a dimension similar to the aether, or maybe something more divine...

lol
when i heard the name "primordium", i immediately thought of primordial soup. come to think of it, i haven't seen that in any other mod, so there's a suggestion. maybe it would spawn random mobs?

it's a good idea, i'll think about.

I was thinking now, that it would be a difficult dimension, she would not have a portal to enter, she would only be accessed by this 50% luck, in it you would receive ultra-rare items that will be used much later, but this will only be only 1% of that dimension, i have great expectations about that dimension, let's see if I can do something interesting.

Cool mod and logo! :D
The images in the description don't load to me though :(

Thanks, and ... seriously? hmm, I don't know what happened in the description, for me it's normal, maybe it's the gifs that I put, but I really don't know.

I think I found the reason, maybe it’s because the images are too heavy and it takes a while to load them, it just happened to me when I went to the site and the images were not there, I tried to restart the page but nothing happened, so I went edit the page to see if the images were there, and they suddenly started to load and appear even after I saved them.

that is, maybe if you wait a little bit I think they carry it.

the problem was actually with the website I used to host images, I'm using another one now, it should be working.