We are finally releasing MCreator 1.7.9. The update that introduces the most advanced event system ever seen in a mod maker with editing support. And much more!

The best way to overview this possibly the largest update in the history of MCreator in terms of how many bugs were fixed and how many important new features were added is to split it into sections. Let's begin with the most important addition - the all-new procedure system.

Procedure system is the replacement for old event system and also for the global events. The procedure is a new mod element that can be triggered both by global events or by calling them from events of specific mod elements.

Each procedure is stored as a separate mod element and can be edited as any other mod element. No actual code is stored, which means that procedures will be seamlessly updatable with new Minecraft versions. This is possible as procedure system is using new generator system which still has to be implemented for many mod element types, but the procedure is one of these which already support it.

Procedure system has many new condition options and event results that were not possible before. Many of existing event results now have more options and are more multiplayer compatible. MCreator takes care of dependencies too, so you can always choose from safe to use procedures. Another addition compared to event system is the support for local variables that can store the data for the time of the event and separately for each event.

On the above gif, we can see how MCreator displays the data that is used by a procedure and how it is matched with the data provided by the event trigger.

Similar to procedure system we created new overlay condition builder. Before, only a basic set of conditions was supported and they were not properly loaded when editing the overlay. Now one can very specifically define when the overlay is shown and when not.

Same blocks as for procedure system are supported by this builder. The whole code block system was made to be very adaptable so support for plugins and additional block packs is planned for future MCreator releases.

AI builder had a revamp too. Whole mod creation wizard is now arranged in a better way and the new AI builder uses block system too. New AI tasks were added and existing tasks can now be more precisely defined.

Variable list received a big revamp too. Now already defined variables can be edited and variable name, type and value validation was much more improved.

Mod element list was improved too. Data is now refreshed in the background so the UI is not blocked. We added support to select between small and large icons which can also be changed using Ctrl + Scroll action. Small icons are quite useful for big mods with a lot of mod elements.

Where did the recipes go?

After much discussion on forums regarding this topic, we have finally decided to remove the recipe option from all mod elements. Now recipes can only be defined using recipe mod element.

This way, the workspace is more organized. The block mod element is a block, a tool is a tool only, etc. This approach is called objective design where each element is a separate object. This is considered a good practice in programming world so we decided to adopt it.

Existing recipes inside mod elements will automatically be moved into separate recipe elements. This change also improves the performance of MCreator in some areas as in many mod element cases, all blocks and items don't have to be loaded as the recipe creator was removed from them.

Another change in MCreator is that we implemented some improvements for big workspaces. MCreator now runs faster with big workspaces compared to the performance of same-sized workspaces in previous versions. In some cases, multiple CPU cores are utilized to improve the performance. However, there is still much room for improvements which will be released in next upcoming versions. Keep in mind that workspace import of older workspaces will be a bit slower than before as MCreator needs to perform a lot of conversions. 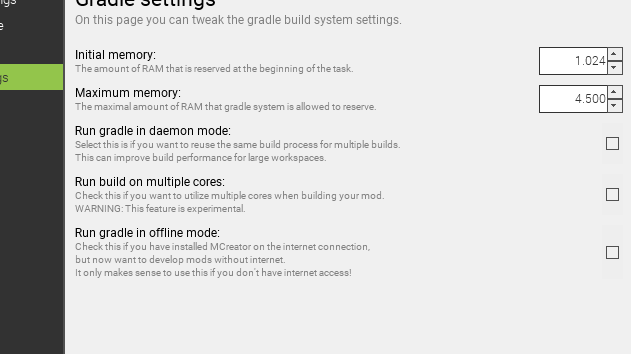 New options were added to the Gradle build system to make builds faster in case of big workspaces. One of these options is the daemon mode which can be enabled in the preferences. When daemon mode is turned on, MCreator will reuse the same build data for multiple builds and a daemon process will run in the background that will wait for build requests. On slower computers with small workspaces, this option can slow down the build, so use it only if you have a big workspace and you see a performance improvement when using it.

Another Gradle option is to run build on multiple cores. This can speed up the build on more powerful computers in case of many files and complicated code but is an experimental feature of Gradle, so if you enable it and get any kind of strange errors, try to disable it and see it the multiple core build caused them.

This update fixes a lot of important bugs too. All of the bug fixes can be seen in the changelog, but the most important ones are listed here:

All of the bugs listed above alongside with many other were fixed in this update.

The full changelog of this release:

With procedure system, another step from the stage 1 of MCreator 2 roadmap is complete. The next two steps are planned for MCreator 1.8.0. We have some other interesting new features in the plan for 1.8.0 too. Can you guess what it could be? 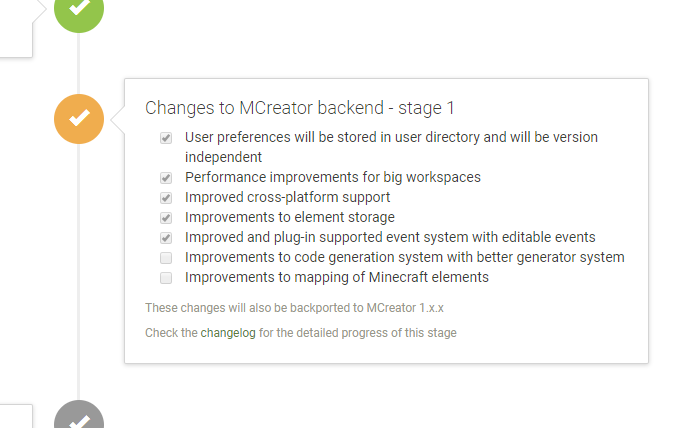 Leave a comment below and tell us what is your favorite feature and/or bug fix in MCreator 1.7.9.

If GUI button or slot was defined without event, it caused recompilation errors. If you are having issues with this, redownload MCreator.

We got the reply back from the Avast antivirus false positive team. They have verified MCreator and without surprise on our side, it was clean so they whitelisted it. Now you will no more get virus warnings with MCreator 1.7.9 from Avast antivirus software.

I was waiting for this update for a long time. This is a great update!

Its About Time Too, Been Waiting A While, But I Know It Takes Time To Make Things Like This So I Appreciate It All The Same

The big workspace on the gif is my workspace! :O It's a big honor to me! :D

CONGRATS MY GREATLY HONORED RAOL!
But Raol, why cant you have Discord? Just sign up, verify the email, friend #9888 (me) and we can collab on RaolCrafts!

I have contacted Avast and reported the false positive. I hope they reach back to me soon, but there might some delay as it is weekend right now.

so how do you update it to it keeping your workspaces with uninstalling fully or do you have to uninstall and reinstall it?

You don't need to really "update". You just download 1.7.9,and it is automatically installed in a different folder (you can change it). You need to export and import workspace for updating your mod to the new Mcreator version.
(Sorry for bad English)

I noticed two elements called MDiamond and DefenseBlock at the Large/Small icon showcase.
Dude, Omega is there!

Oh wait you said it already

As the Raol said. Keep in mind that some of the mod elements won't be imported due to many changes - most notably events.

The update...
It's Amazing
I see a lot of nee things to thia update.
The blue mod is going to be packed.
Thanks to all of you.
:D :) C:c:

I am looking forward to the update :)

i know how long coding takes, and what youv'e done, is just incredible... it's like if a dream comes true, for everyone who ever want to make a mc mod. but what i could not really read somewhere is: could you someday add
- texture support for obj files?
- does obj models rotate in players direction?
- maybe a option to add multiple collider for blocks?
- a 3d editor or a better visualisation for the block collider creation?

All of these are in issue tracker waiting to be implemented. Just wait for them :)

I was waiting for this update for a long time... and finally here it is!
Great job MCreator's Devs, you did a great job!

Where can I find the condition for checking a block? The old IsBlockat(i, j, k) = (block) condition