MCreator 2020.5, the first open-source full release is here. It adds literally tons of new features, including particles, and an enormous amount of procedure blocks. Read on!

The most anticipated and requested feature of the 2020.5 update is definitely particles. Make particles with gravity, flying particles, lit particles, and much more. Check the demo video below for some examples.

This update introduces support for Minecraft 1.16.x Bedrock Edition Add-On making. Due to a bug in the Bedrock Edition, blocks can't be shown in the tabs

Blockly editor was updated to the latest version of Google Blockly library which makes it a bit snappier and performant. A new default skin is now used, which is more flat and uniform with other parts of the UI. If you prefer the old one, you can switch back anytime in the preferences.

This update adds a lot of new procedure blocks. So now, a search for the procedures was really needed. So we added it ;) Check it in the action in the video below.

We have completely reworked the code of the GUI editor. Now, it supports an intuitive drag & drop system, you can select components by clicking on them. Snap to grid system was improved too.

Another quite requested feature we finally added is waterlogging support. Now, you can make you block waterloggable with a single click on a checkbox inside the custom block maker. 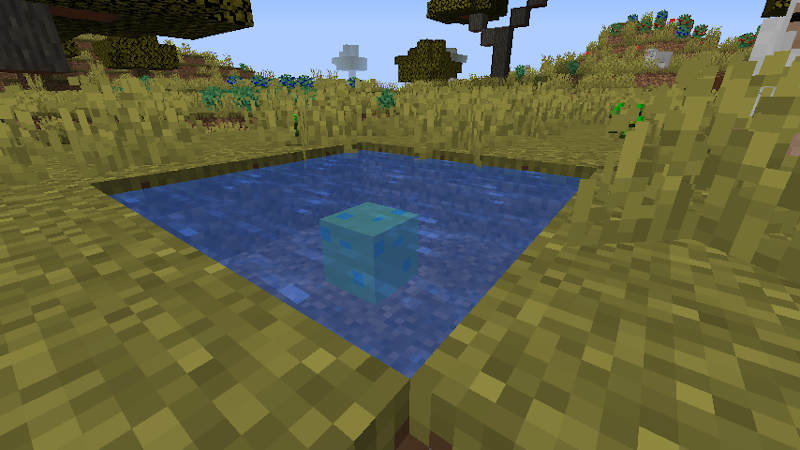 Plants got some new features too. The most important new feature is support for double plants. Make taller plants like the ones in the example below in MCreator 2020.5. 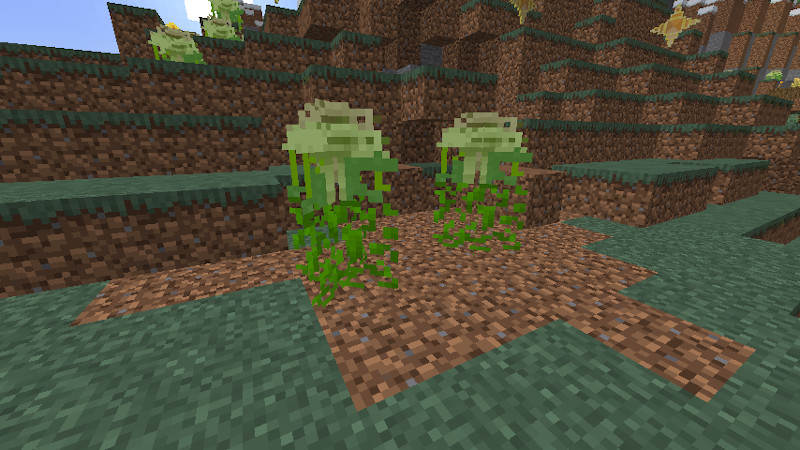 As already mentioned before, 2020.5 added a lot of new procedure blocks. And when I say a lot, I mean it :D Many community plugins were merged into the core, bringing many new options inside MCreator.

We have also added support for a new procedural block type, which can accept sub-procedural blocks as the input. One of such blocks is "do in world block", which can run the desired action in the specified world instead of the current world. This way, you can say place blocks in the Nether from action triggered in the Overworld. This will greatly improve the options for custom dimension portals, for example. 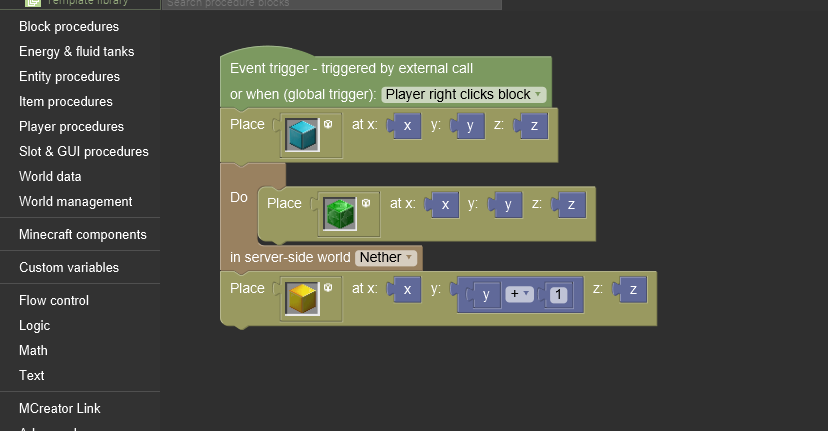 Some new player procedure blocks were added too. With a new number of players procedure blocks and "for each player" statement block, you can do many new creative mechanics in the game too.

There is a new "for each entity in range" statement procedure block too. Now you can not only target the nearest entity of type but all of them in a given radius. An example of use for this block is in the video below, where we made Thor's hammer utilizing this procedure block.

Loot tables got a neat overhaul in this version. Now, one can make loot table entries affected by fortune, explosions, only make them work when used with or without silk touch, and make them randomly enchanted. You can see all these features in the MCreator on the image below.

Biome editor got quite some new features too. Now, one can specify separate grass and foliage colors, also water, and water fog colors. Default biome features can now be managed much more precisely, including temples, village types, mansions, pyramids, and more. Check the video below to see this in action.

Custom sounds can now have multiple sound files, that are randomly chosen when the sound is played. Subtitles are now supported too, to improve the accessibility of your mods.

Small, but very anticipated feature. Now one can add a custom painting mod element that will be randomly chosen when placing the paintings on the walls. Example custom painting in the screenshot below. 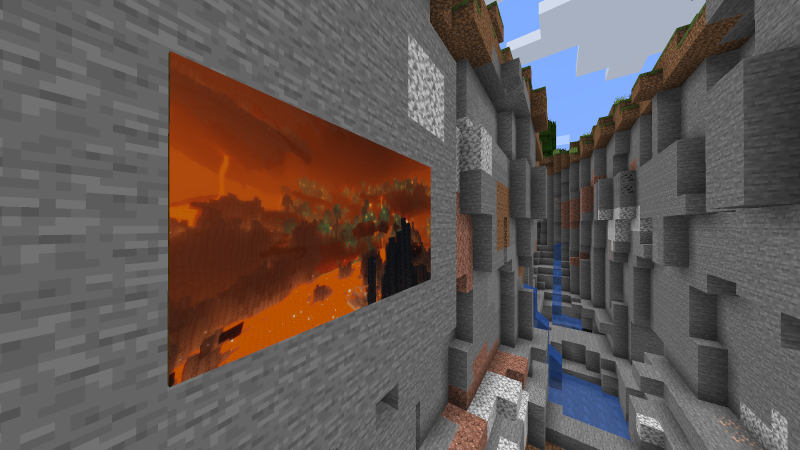 Asked all around the forums, so we listened. Open-sourcing was a good time to do this, as more people could contribute. MCreator now supports translations. Users helped translate MCreator on Crowdin and now many new languages are supported. Keep in mind that some languages only have partial translations and that translations are community-made, so some keys might be misleading or not translated properly yet. 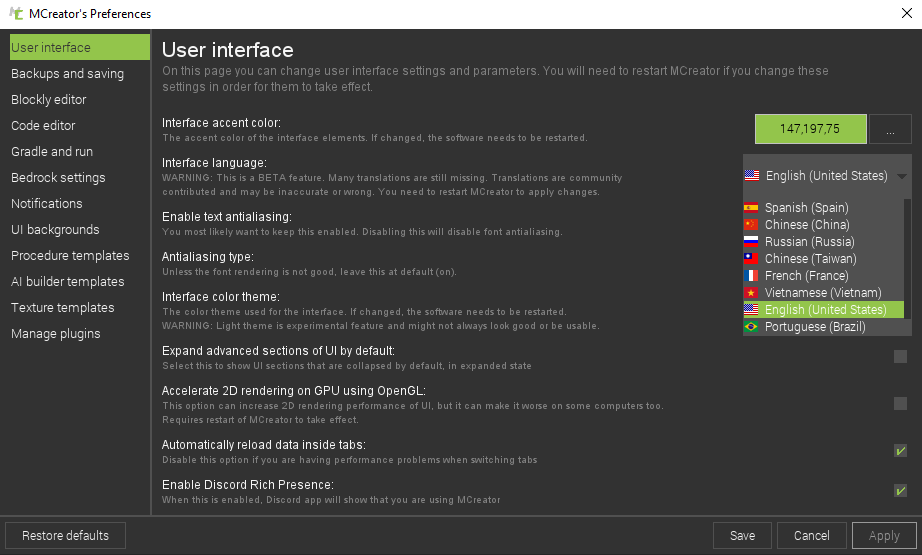 If you would like to see all the most important features of the 2020.5 update collected in a video made by our developer Matej, check it out below.

Big thanks to all the people who helped to shape this update since the release of the 1st snapshot of MCreator 2020.5. Thanks to the people who open PRs, report issues, look for bugs, thanks for translators, tutorial makers, and everyone involved in the community. It was really fun making this update with you guys, and I think the vast amount of new features reflects this very well.

We can't read all this without some bitter thoughts of the fact that I will slowly have to stop working on MCreator. I had told there is a chance for another update for 1.16.x in the past articles. I have also had time to process all changes in my life in these weeks, and so, I plan to post an update to clarify a bit more on how I plan to steer MCreator in the future. I will clarify all this and much more in the upcoming article that I plan to post around a weekend after the release, or in other words, when the things like potential patches and such settle down, so stay tuned for this ;)

UPDATE: We have released a patch update to fix two bugs found in 2020.5:

UPDATE 2: We have released another patch update to fix another set of bugs found in 2020.5:

Do you need more inspiration for the name of the updates? They almost always say the same thing. xD

It is still time to change it in the article :D But the problem with names is that I need to keep them one line, so usually, they look kinda similar.

But weel, the name does not lie ;)

As it's the first update made with the community, a lot of users thought it would be something like "The first community update".

Well, the first community update was the 2nd snapshot, but we can make this work ;)

Thank you for all your hard work towards another wonderful update to this pretty simple to use program. Looking forward to a potential 1.16.x version, as I am sure many are, but a thank you is definitely in order for all you have already done so, a huge Thank You to everyone!

You are very welcome, and thank you for the kind words ;)

You didn't write a novel. 😥 Anyway, I loved to work on this (gargantuan) update.

I just spared some mouse scroll wheels this way XD

want to cry. this is the last update

Woah, we're in the end game now! 😎 In all seriousness, another stunning release; this deserves more attention.

I want to appreciate to every soul who helped MCreator to grow. Developers, modders and users; every single person who brought Mcreator to where it is today. I waited 2020.5 with excitement, however some part of me didn't want today to come because of the probability of Mcreators last update... I'm soo glad that I'm in this community with you guys. YAYY 2020.5 !!!

Yep, huge thanks to everyone involved ;)

Holy...no way this is real.
MCreator has had packed updates in the past...but this is the longest changelog ever.
Time to update my MCreator version and hopefully not break my mods!
The paintings and particles were SO cool though, I could never imagine those elements in action!

It's here :D
Great job on the update all you Mcreator devs!