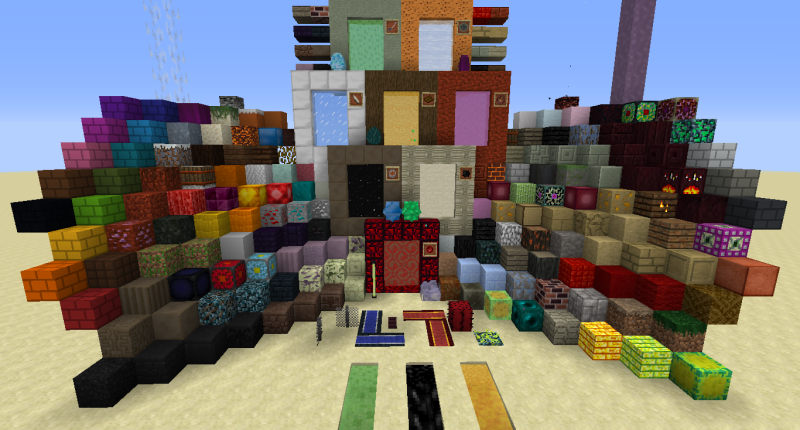 All blocks, portals, and igniters 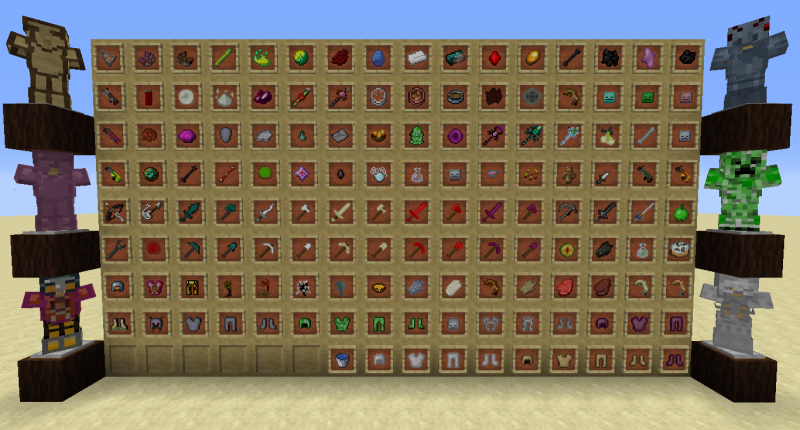 All items, tools, foods, and armor 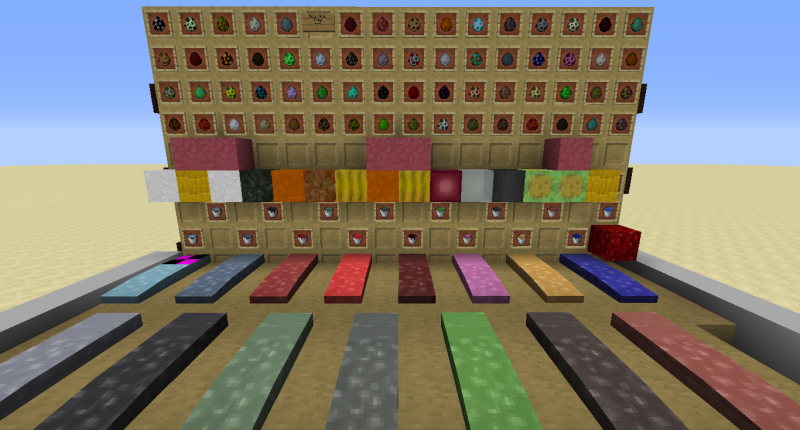 All spawn eggs and liquid potions (with a rough creation guide) 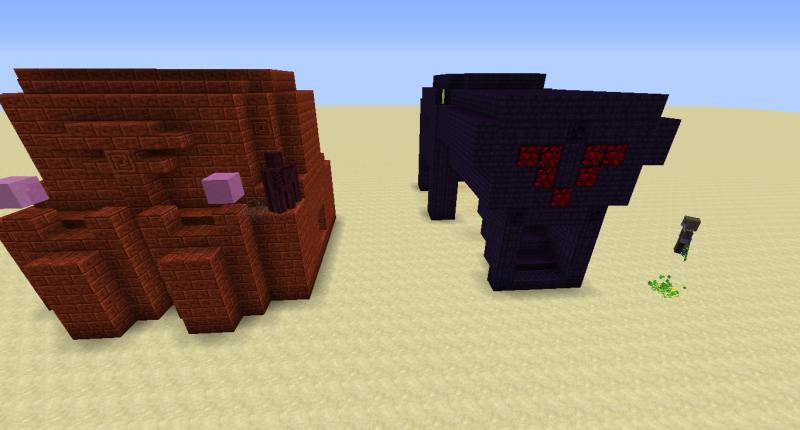 I am no longer updating this mod. I have passed it on to RaoltheBest, and all future updates will be for Hodge-podge III. Check it out here!

NOTE: This mod still has some bugs, most noteably:

Portals will spawn Zombie Pigmen at an astounding rate. They WILL overrun the area in a matter of seconds. I would advise trapping your portals with a pitfall.

If you die in a dimension and try to go back after you respawn, the game will crash and the save will get corrupted. I DO NOT KNOW HOW TO FIX THIS

In survival mode, entering/exiting a portal will sometimes spawn you above or below the portal, optentially suffocating you. I don't know why this is or how to fix it.

This mod is essentially the same as my original Hodge-Podge mod, but the sheer amount of revamp I did to it makes it worthy of its own page now (Kind of like RaolCraft)

While the primary goal of this mod is to introduce a myriad of blocks from pocket edition, newer versions of minecraft (that frankly, should have been in the game updates ago), and mostly my imagination, the structure of the mod has been redesigned to add more of an adventurous aspect. With more new bosses since the last version, as well as many new mobs, a progression system has been implemented. Now, in order to reach the other dimensions, staffs must be built using resources from the other dimensions you've gone to. These staffs will summon the next boss, but only when used in a certain dimension. Killing the boss rewards you with items, XP, and the igniter to the next dimension.

In addition to the new bosses and mobs, there are now seven full sets of armor, plus two pieces of modified insect armor, which when worn allow you to fly and land without taking fall damage. Tools (not hoes) can now be made with redstone crystals, and a new reddish-purple material called tyrianite.

The newest blocks, mobs and items:

Electricity- kind of like fire, it extinguishes after very short time if on any block other than voltrock. It deals damage and causes slowness if touched. Created by using a thunder charge on a block.

Phantom Fire- A pale blueish-purple flame that never burns out regardless of what block it is on. If you touch it, it causes blindness and damage.

Phosplhouric Ore- A glowing green ore that occasionally gets created when a thunder charge is used on voltrock. It can only be mined with a tyrianite pickaxe or better.

Block of Phosphlourite- created with stardust and 8 phosphlouric ore. It glows brightly.

Tainted Reactor Core- This block is used to summon the final boss, Erragrul, and the Tainted Shrine

Darkworld Reactor Core- This block is used to summon the ultimate boss, Svartalfur, as well as the Darkworld Temple.

Lava Geyser- This block can be crafted  with netherrack, geysers, and lava. It has a chance to shoot lava into the air above it for a short time.

Steam- A liquid produced by geysers, it flows upwards very fast and will hurt you if you touch it.

Darkworld Relic- A staff used to summon Svartalfur, it must be used on a Darkworld Reactor Core.

Phantom Dust- Used to create phantom fire. It is made with ingredients found in many different dimensions.

Staff of the Cold- Used to summon the Frozen Knight. It can only be used in the Cold.

Dehydrated Flesh- dropped by Wasteland Zombies, it can be eaten, but is not very good for you.

Murkwood Seeds- used to grow murkwood trees without needing a sapling or dirt.

Volucite Shard- Rarely dropped from robots. It can be crafted down into useful resources.

Smoldering Bone- Trophy item dropped by the Smoldering Knight. It can be crafted down into some coal.

Tainted Bone- Trophy item dropped by the Tainted Knight. It can be crafted down into some tainted crystal ore.

End Crystal Fragment- Trophy item dropped by Ender. It can be crafted

Darkworld Essence- Trophy item dropped by Svartalfur. It can be crafted with compressed cobblestone to turn it into odd stone.

Tainted Ichor- Trophy item dropped by the Erragrul. It can be crafted with bone blocks to make wither bone blocks.

Jabberwock Blood- Trophy item dropped by the Jabberwock. It can be crafted with coal to make some thunder charges.

Stray's Pendent- Trophy item dropped by the Frozen Knight. It can be crafted down into some diamonds.

Polyp- Carnivorous plants that live in the great tree. They attack by shooting vines to ensnare their prey.

Phault- Skeletons that have become cracked and mangled over time. They are held together with tar, and they attack by shooting tar wads. They spawn in certain biomes of the Taint, and can be very dangerous.

Scarecrow- These zombie like creatures were animated with soul sand and roam about plains-like biomes  in the Overworld, Degraded Wastes, and Foodworld. They drop wheat and sometimes soul sand.

Shiver- A zombie fisherman that got its head frozen in a block of ice. They spawn in the Cold and drop raw fish.

Skeleton Raptor- Skeletal remains of deadly dinosaur predators. They only spawn in the corrupted valley, and they drop bone blocks.

Glitch- Terrifying creeper-like creatures found in the Darkworld. They have very pale, greenish skin covered in cryptic markings and multiple yellow eyes. They move very, very fast and can "glitch out", briefly turning invisible.  Their only giveaway is that they constantly emit a flurry of white sparks. They drop redstone when killed.

Frozen Knight- The undead remains of a knight who dies lost in the snowy expanse of the Cold. It  wears diamond armor and uses a shield and silver axe. It is summoned using the Staff of the Cold, and drops an assortment of items and the Ice Dragon Egg.

Erragrul- A large, ancient golem made of grimstone, it is responsible for polluting the Taint to it's current state. Summoned by activating a Tainted Reactor Core with an Ancient Relic of the Taint in any dimension. When spawned, it will also generate the Tainted Shrine. Erragrul has an immense amount of health and will often create tainted skeletons or phaults when it is damaged. Additionally, any block it lands on will be flooded with noxious poison and be converted into grimstone. When it dies, Erragrul drops grimstone, tainted ichor, and other items, as well as decomposing into a pool of potion of decay.

Svartalfur- An ancient warlord-mage of the dark elves, this is the most powerful boss in the mod. Svartalfur is summoned in any dimension by activating a Darkworld Reactor Core with a Darkworld Relic, a process which also creates the Darkworld Temple. Svartalfur is fought in two phases. The first phase is a hovering form which attacks by shooting large phosphlourite chunks. When damaged, Svartalfur has a chance to either produce an electroslime minion, or to strike lighting. This can be troublesome, as electroslimes violently explode when struck by lighting, and Svartalfur glows with extra power when hit by lightning. After the first phase, Svartalfur becomes enraged, drops to the ground and attacks by shooting nether stars. The lightning-related buffs can still happen, but Svartalfur can also summon dark elves in this phase as well as electroslimes. When killed, Svartalfur drops lots of goodies, and generates a small pillar with a phosphlurite block on top of it.

Ancient Relic of the Taint is now used to summon Erragrul.

Geysers now have a chance to produce a jet of steam each tick.

Saplings work now, but can be grown with any dye, not just bone meal.

leaves drop saplings at the normal frequency of 5%

Tainted crystal ore can now be found underground in the taint

Vindicators do not spawn in the Taint anymore.

Illusionists sometimes spawn when a Wanderer is killed.

Caterpillars cannot breed anymore, but they do spawn naturally now.

Ice Igloos and Frozen Temples might spawn in Ice plains biomes (I don't know if they actually do because I can't find any, but the code for them is there)

More information can be read in the progression walkthrough, which is found in the zip folder download.

Most recipes are  (in my mind) pretty easy to figure out. I would still suggest using Just Enough Items though.

If I ever get around to it, I might make a lore document that further details everything.

-Make the Foodworld biomes have "trees", but not have to have dirt as the underground block.

@#1 more cool Than Hodge Podge 1. I don't know why my SwiftKey keyboard deleted it

This mod is so imaginable. SOOOOO CCOOOLLL

Well this is a surprise. Mod of the week, and I didn't even enter into the drawings... nor was I planning to until I updated it to 1.10.2

I love the mod :D Congrats for mod of the week!

Awesome a new update. Hopefully this will be in the pack

I have uploaded a new 1.11 version to remove the pasture biome. Apparently, the game cannot process farmland as a ground block, and crashed the game upon loading the biome

How did you export it without the textures going missing?

@#11
I found that the textures that got screwed up in importation of the workspace could be fixed by deleting them from the mod resources and simply re-uploading them (all except armor, which is bugged)