The first MCreator update in the year 2019 is here. MCreator 1.8.2 is faster than any version before and packed with many new features and many bug fixes. Check it out!

The first and one of the biggest improvements in MCreator 1.8.2 is its performance. To achieve faster build times, we now cache many parts of the code so they don't need to be recompiled. To do this, we have updated integrated Gradle to version 4.4. Workspace mod element format has been changed to improve build and workspace import times too. Code format tool and import organizer now have improved parsers too. 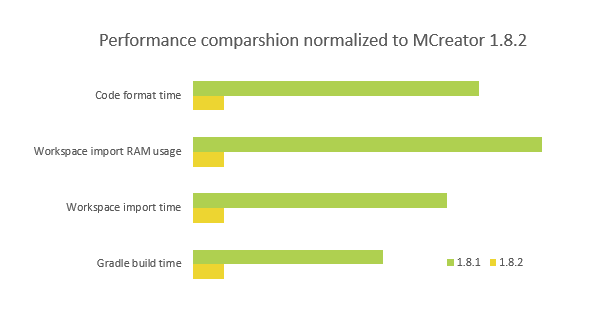 MCreator 1.8.2 changes the way mod elements are stored. They are now stored in JSON files instead of .mod files. The reason for this is because JSON is more readable and can be used by version control software.

Now each workspace has a fixed name too. On the creation of the workspace, a mod name and mod id are defined. Therefore the mod names are now fixed and not set at the export time but rather at the time of workspace creation. Now the export button simply exports the workspace based on the current workspace settings. Many new mod settings were added too. 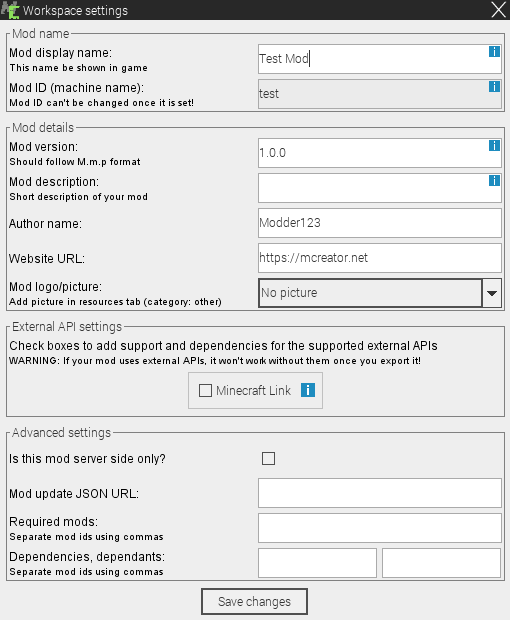 Another big change is improved GUI editor. The UI has been redefined to be more user-friendly. Slot IDs can now manually be defined to match with your procedures. We have added a configurable grid that supports snapping so you can now make your GUIs much neater. Check it in action on the video below.

Custom 3D models are no more stored in mod elements. They are now part of the resources. The resources tab has been added that holds all the used textures, models and other assets of the mod. One of the tabs here is 3D models tab in which the user can manage custom 3D models. 3D models added here are then listed where they are supported and can be used, for instance in block maker at the selection of block model.

This one has been in our todo list for ages. And finally, it is here. The user can now select multiple types of block rotation modes that result in different types of rotations based on the players' position. A new get players direction procedure block has been added too to expand the possibilities even further.

In MCreator 1.8.2, recipes automatically get optimized. This means that now all the combinations of a recipe you define are now automatically possible, without the need for manually defining all of them. To see this in action, check the video below.

The article would be too long if we described all the changes and bug fixes in depth, so you can see the full list in the full changelog of this release here:

With this update, the stage 2 of the MCreator 2 update roadmap has started. We are closer and closer to first test versions of MCreator 2.x.x branch. 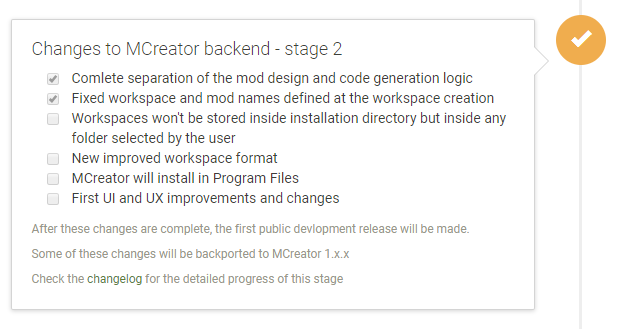 Leave a comment below and tell us what is your favorite feature and/or bug fix in MCreator 1.8.2. Make sure to share this post with all your modder friends so no one will miss this update. Stay tuned as we have some other big news ready to be shared with you soon - and the hint (two actually) is in this article ;)

There were some bugs found in 1.8.2 so we decided to release a patch update. We have added some new block rotation types in the patch too. If you want this new feature or are having one of the following bugs, consider reinstalling MCreator 1.8.2:

To apply the patch (fix these bugs), uninstall MCreator 1.8.2, download it again and install it again.

I am the bug reporter if I found any :)

I hope there wont be many :)

Did you catch the bug where the game kind of breaks, if your mod id can fit inside the word "minecraft"?

I don't quite understand what you mean. You can open a support ticket on our issue tracker but include more detail.

when mcreator starts it stops at loading workspace data

Try reinstalling it. If the error persists, run MCreator with mcreator.bat and copy the terminal contents and open a support ticket. Thanks!

Please specify in the ticket if this happened after a fresh install or after importing a workspace and if it was with importing the workspace, attack it too.

No problem, I am glad you like it :D

I am trying to import my mcr file from 1.8.1 to 1.8.2 and it says Converting mod element format which it has said for the last 4-5 hours but my mod only has around 110 elements any idea why it is taking so long?

Run MCreator with mcreator.bat and copy the terminal contents and open a support ticket on our issue tracker. Thanks!

Or just attach the .mcr workspace file in the ticker on the tracker (https://mcreator.net/tracker) and I will try to import it myself.

ticket* :)
I think Klemen.exe is bugging
Am joking

Right now there are so many issue reports and comments that I just can't handle it :D Plus I am in the middle of the university exam period so yeah.

Oh wait, you are an university student + a Lead developer of Pylo and websites and softwares? What!

And occasionally I work on other projects for other companies too, I have quite a busy life :)