The update is here. MCreator 1.8.0 is no doubt the update with the biggest changelog so far. It adds many new features, fixes many bugs and introduces big performance improvements.

Talking of performance, workspace imports are now up to 300% faster as MCreator caches many resources. Performance of the UI was imported too, new mod element wizards are now opened much faster. Many data structures were migrated to a new caching system so MCreator is now overall more responsive and faster to use.

There were many improvements to the procedure editor too. Most importantly, a bug with procedure system block selector not working on Mac computers was fixed. We have added some new procedure blocks and improved existing blocks (see the changelog below for more info).

Option to collapse procedure blocks was added. This way, larger block structures can be collapsed, to make larger procedure systems easier to read. If you want to edit specific section later, you simply expand the block and edit the blocks inside the collapsed section.

If the user enables this option in preferences, comment blocks can be added to the procedures to make the procedures more readable and easier to understand while debugging them or trying to remember what this part of procedure does a month later after you made it ;)

Code editor got many improvements too. Autocomplete window is now automatically triggered based on context now. We have added documentation window with a direct display of Minecraft Forge JavaDoc for easier programming and understanding of individual Java methods. Import formatter and code formatter has been improved. Jump to declaration now supports multiple packages and jumping between them. The automatic tab indentation was improved.

There were many other small improvements to the code editor too. On the image above, the new smart autocomplete can be seen in action. Jumping to lines of code in case of crashes and compilation errors was improved too.

After many updates of waiting, we are finally removing the structure/schematic limit. Due to the nature of the new system, old schematics will have to be re-imported and redefined if you will import workspace from MCreator 1.7.9 or older. We now support a new Minecraft structure format with all metadata, entity, NBT, block states and other definitions of a structure. This is much better than the old schematic system which only supported blocks without states and basic entities. We still support the schematic format, but it gets converted to a structure while importing.

A new button was added to import structures that user makes inside test Minecraft environment client using structure block. This way, structures with custom blocks and entities are now possible.

Structure generation for structures, plants, and ores was improved too, so the world loading speed with custom mods is now much faster.

Another aspect of MCreator that got attention is dimensions. We have improved dimension performance, added new dimension events and made portals much better.

New dimension events (procedure triggers) are: on portal trigger used, on portal destroyed, on portal random display tick, on player enters dimension, on player leaves the dimension. With these new triggers, many new functionalities will be possible to implement. 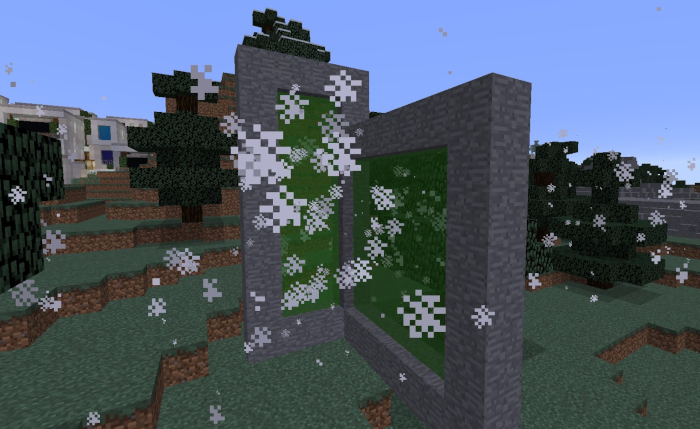 As it can be seen in the picture above, portals can now have any size. They also teleport custom entities including minecarts in custom dimensions. Portal igniter sound was removed, as it is better left to the user to select own sound using procedures.

Many small but great improvements

There were many other minor but great improvements too. All block selectors now support metadata, there is no single place in MCreator without metadata support left. All mod elements now have selectable creative tabs. All mod elements can be selected to not have a creative tab at all. New procedure blocks were added. Many new options in mod element wizards were added, such as fluid type, block affected by silk touch, can plants grow on the block and other. 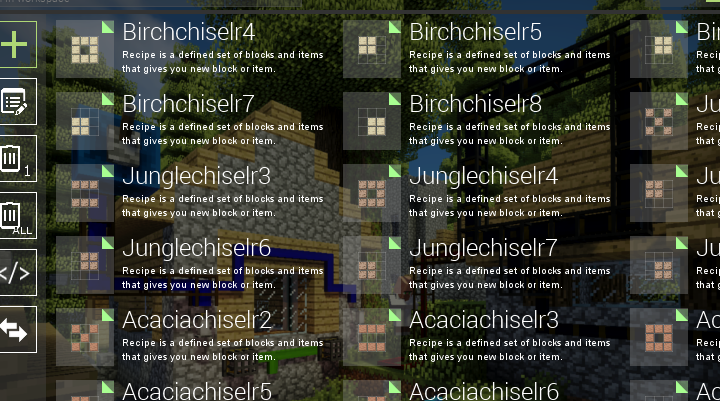 Mod list was improved with added recipe previews, as seen on the picture above. Buttons in the workspace were slightly rearranged to make the UI easier to use. New buttons were added to the Gradle console, including the search function for the gradle console.

Many new global procedure triggers were added. These triggers will make all sorts of new things and functionalities possible, including many changes to the core gameplay of Minecraft by intercepting important events, such as when the player joins the world.

New global triggers that were added: an entity joins the world, entity travels to dimension, world loaded, world unloaded, entity wakes up, an explosion is spawned, player global tick, on crafted, on smelted, the player joins or leaves the gameplay, when the player respawns, when block breaks, when block is placed. All existing global triggers were made server compatible, so this is a big and important step towards full SMP compatibility of MCreator mods.

The full changelog of this release:

With this update, the stage 1 of the MCreator 2 update roadmap is complete. Now we are moving to the stage 2, which means we will start developing first test versions of MCreator 2 in the next months. 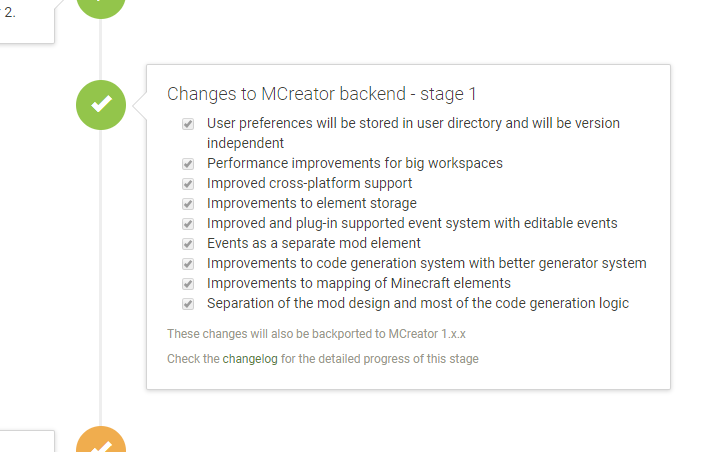 Leave a comment below and tell us what is your favorite feature and/or bug fix in MCreator 1.8.0. Make sure to share this post with all your modder friends so no one will miss this big update!

The update is finally released! :D

Stair support is the same as in 1.7.9 - with custom models. Metadata: yes :) Read the article to see the list of all changes, nothing less and nothing more

Well exactly but now we can do stairs :) at least as a decorative since the hitbox is hard :V

well there is metadata and fun, so finally i can make ACTUAL ROTATING LOGS!
MCreator is starting to become OVER 9000!!!

i would also be happy if you check chocolate :)

Metadata support was only added for existing blocks so on all block lists, there are blocks with metadata as this was not the case before. Actual metadata (blockstates) support is still in the plan, for MCreator 2.

I ask the question about the support for techne I forgot to ask if it's now suitable for animation for multiple shapes/parts?

Animation support itself has not been changed, we just fixed some bugs. You can open a ticket on our issue tracker for a definition for animations for all parts and we will consider implementing it in the future updates.

Oh hell yeah. I feel like MCreator will be greater then ever in those next months.

Thanks! I will make sure it will be.

I haven't been modding in MCreator for a while (I started modding with forge in the Summer). Let's change that :) :D

Glad to hear you will use MCreator again. You can incorporate the Code tab to mix your Forge knowledge with MCreator.

I am quite sad that custom .lang entries are not still a thing as the current system that rewrites the file on each recompilation is quite annoying compared to the older one that just added a new entry to the file on element creation. This way I have to add them after each export manually to the final mod file.

Sorry, I totally forgot about this. If there will be any other bug too, I will re-release 1.8.0 with this implemented, otherwise 1.8.1 will have this feature for sure. For now, you can go to user folder and open mcreator.workspace file. Here you can add new language entries manually and they will stay there. You can use some kind of online JSON formatter to make the file readable.

Nuparu, I have reuploaded patch with some bugs fixed, and I also added an option to add and remove custom entries.

Congrats on the release of 1.80 - I can't wait to get started using it and updating the mods I did in 1.7.9. Is the multi-player issue resolved in 1.80? It's the one option I need to get one of my mods supported on multiplayer servers. :-) Thanks!!

Thanks! Some SMP issues have been solved, but not all yet. I suggest you to read the article to get the full real image of all new additions and fixes in this update.