There we are, we broke the record for the MCreator update with the largest changelog once again. MCreator 1.9.1 is here. And it is packed with new features. Check it out!

Before we dive into the specific features that were added, I would like to highlight some of the things that can be done in 1.9.1 and were not possible before:

MCreator 1.9.1 only supports shareable ZIP workspace file format and workspace folders. If you have any MCR based workspaces, make sure to import them in MCreator 1.9.0 to convert them to a new workspace format so 1.9.1 will be able to open them.

One of the important additions is greatly improved flying and water mobs. As you can see in the video below, mobs can now actually fly by themselves based on their AI controls.

MCreator can finally make stairs. 1.9.1 adds support for block bases (formerly known as TX block mod element) back! Make custom walls, fences and stairs using them. More block bases will be added with the updates too. 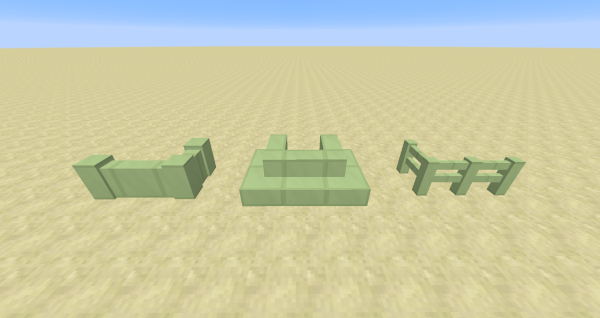 MCreator 1.9.1 will finally add the improved image editor we have been promising for a while now ;) We have listened to your feedback and added some new tools that have been requested in it. Now it supports layers too. The texture from template maker tool has been merged with this new image editor too, so there is now one unified image editor that supports editing all the textures in the mod, including GUI and armor textures. 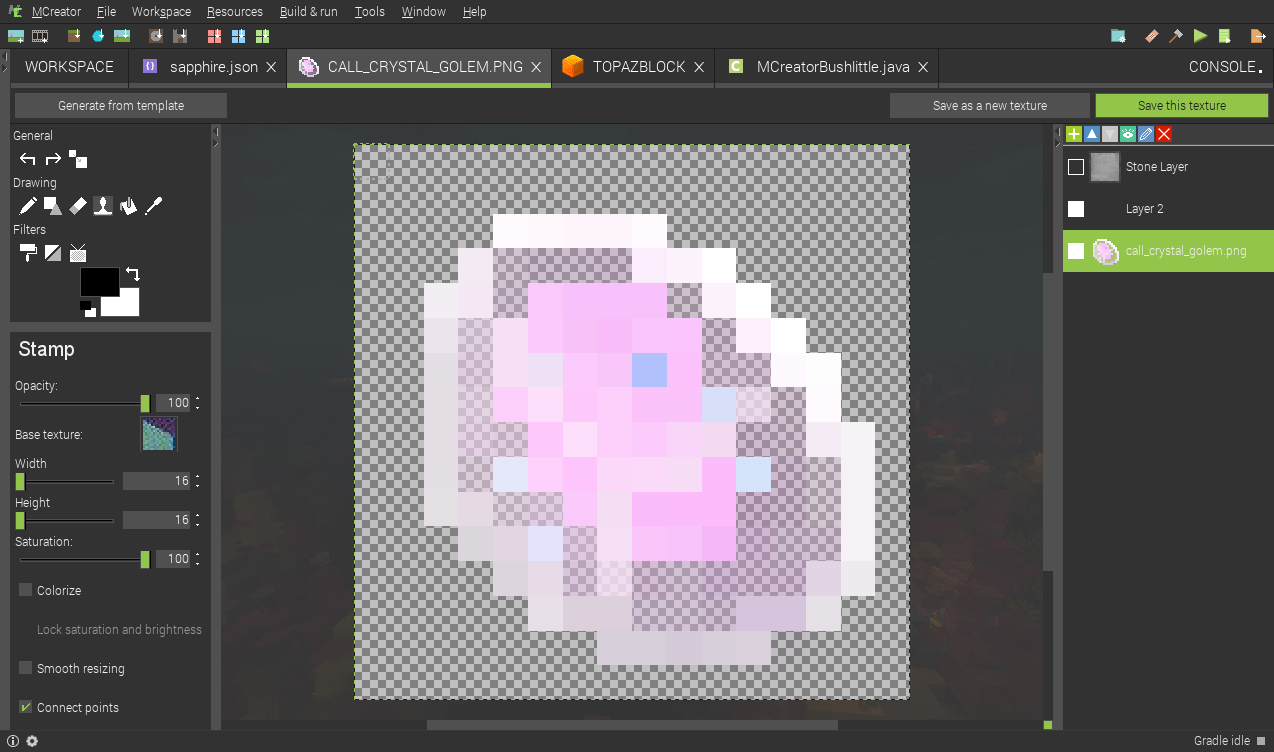 Another new procedure block is an item cooldown procedure block that will disable item right-click use actions for the given amount of the ticks. The cooldown will be shown as a progress bar over the item in the hotbar too. The system currently does not support cooling down left click actions. 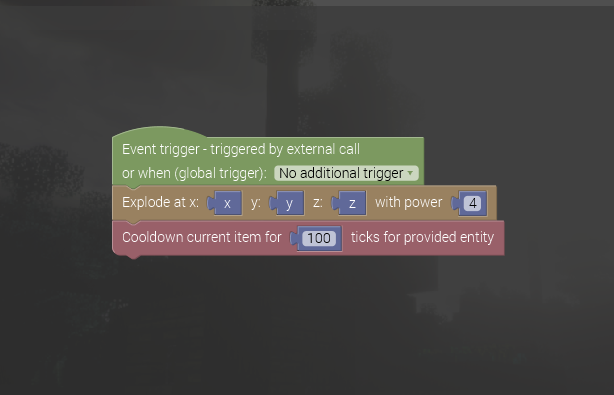 Another addition are improved mob animations. Now instead of selecting on which part to apply a given set of animations, animations can be set for any part. User can choose existing animations plus 25 new animations ranging from body part animations to fixed/constant movements. 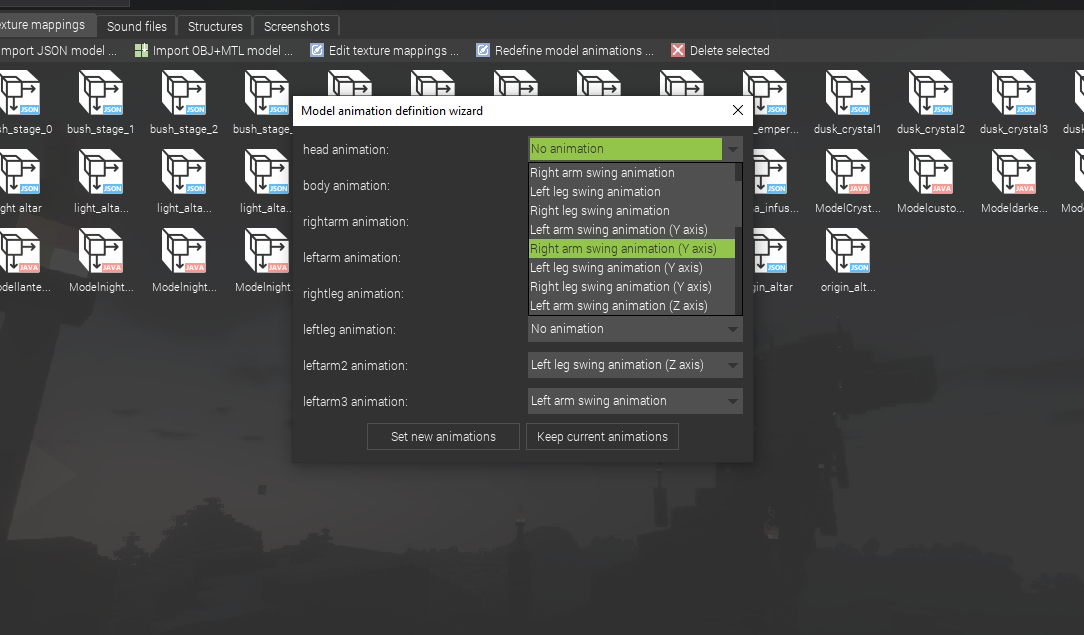 One of the more requested features in 1.9.1 is definitely the ore and biome dictionary support. With this feature, you can make mods compatible with other mods and work with recipes of other mods. Ore dictionary compare procedure was added too to even further expand the possibilities of the ore dictionary system. 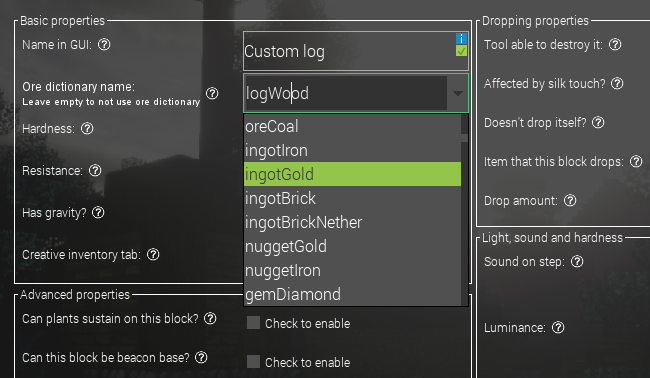 1.9.1 adds an option to enable controls for your mobs/living entities. One can enable forwards and strafe control. One can make ridable mobs like horses with this and even custom vehicles.

New GUI slot event triggers were added. One can now detect when the item was taken from the slot. This enables the world of true crafting systems where the action happens when the user takes the item from the result slot instead of having the need for a button that executes the crafting action. 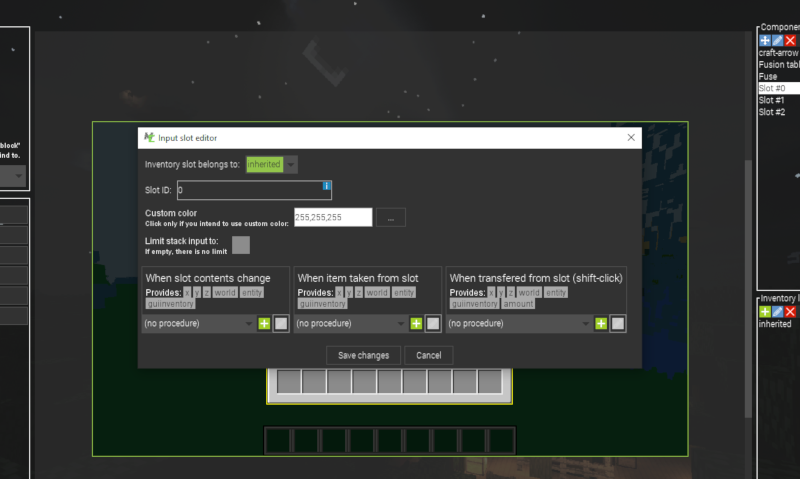 In previous versions, there were issues where variables did not have the same value on the server and client-side, which resulted in strange bugs with many systems, more notably with overlays. This will be fixed in MCreator 1.9.1, where the global variables will automatically be synced between the server and client worlds. See the example of this on the video below. Variables will now work on multiplayer worlds too.

Another important feature of 1.9.1 is that GUI related and key binding procedure triggers will now properly work on multiplayer worlds. MCreator now uses Minecraft Forge packet communication system that allows us to propagate the events between clients and the server in a proper way. This feature will add proper multiplayer support for GUIs in MCreator.

Another fix related to this is that ranged items now properly world on multiplayer worlds.

As with many recent updates, the article would be too long if we described all the changes and bug fixes in-depth, so you can see the full list in the full changelog of this release here:

What about MCreator PRO?

We have contacted Mojang about MCreator PRO as we would like to make sure we are compliant with their Minecraft commercial guidelines and brand guidelines. We don't want to go in a direction they would not like. We are now waiting for their reply before we decide in which direction to take MCreator with its PRO version.

There were some bugs found in MCreator 1.9.1 so we decided to release a patch update. If you are having one of the following bugs and downloaded MCreator before the time of the patch, consider reinstalling version 1.9.1:

To apply the patch (fix these bugs), uninstall MCreator 1.9.1, download it again and install it again. After reinstalling it, make sure to regenerate code in all the workspaces you already opened with MCreator 1.9.1 by clicking Build & run -> Regenerate code and build.

There were some minor bugs found in MCreator 1.9.1 so we decided to release a patch update. If you are having one of the following bugs or want to have the features added in this path and downloaded MCreator before the time of the patch, consider reinstalling version 1.9.1:

To apply the patch (fix these bugs and get the listed features), download MCreator 1.9.1 again and install it over the current installation.

Leave a comment below and tell us what is your favorite new feature of MCreator 1.9.1. Stay tuned!

no, I mean status effect, like I can make mob freeze, paralysis,... or something, a new effect with new name, not potion

How do i fix custom structures spawning in the ocean? i want them to spawn on land, Only.

And is there also a way to make them spawn Underwater only?

You can choose spawning biomes

wow nice ! Will you guys add custom partical, Klemen ? and what about a procedure block that detect if entity kill a specific entity (with specific weapons if possible)

There is already a global trigger called: 'when entity killed another entity'

I mean will a specific entity ! Like if I kill a villager different from I killing a zombie

Oh. You’re right, that is impossible

One could check for entity type, though.

OooOOOoh!
Can't wait until pro!
I am definitely paying for that!

PRO will not be a thing, unfortunately, but everyone will get the features. You can read about this here: https://mcreator.net/news/54563/mcreator-2-mcreator-pro-and-what-20195-thing You can still consider donating to help keep this project alive :)

This update has made it difficult to create mods in Mcreator.

Can I make water plants?, if not, can it be included in the next 1.12.2 mcreator update.

Technically you can make them.

Make a plant block as normal block, make 1x1x1 structure out of it and set this structure to spawn on water.

The animated image of Flying and Water mobs...
Mmmmh the skin is FuzeIII is everywhere i see.. :D