MCreator 1.9.0 - The potion of the full screen and more

MCreator 1.9.0 adds some of the most anticipated features in the history of MCreator including full-screen support, custom potion effects, and custom armor models. Check it out!

The first thing anyone updating from previous versions will notice is that we have made some notable interface changes. MCreator now has menubar and toolbar with the most commonly used actions close to the mouse cursor. Instead of fixed tabs, MCreator now opens tabs as you open different tools. The interface can now be maximized (full screened) so you no longer need to work in a small window. Now MCreator feels like a true IDE! 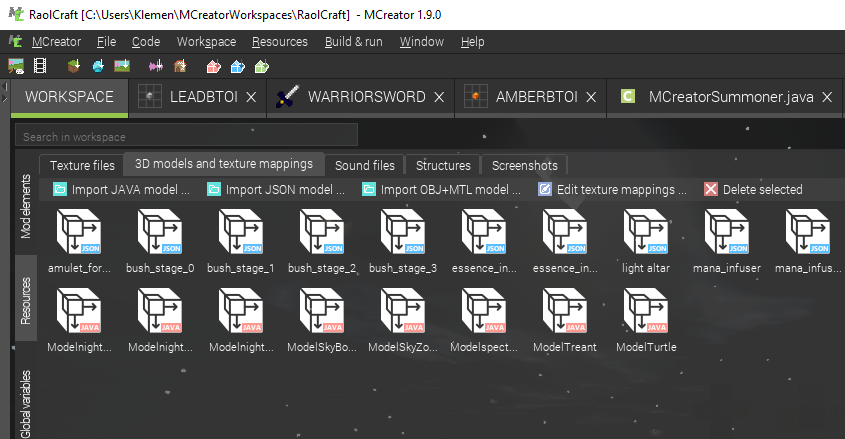 We have introduced 3D previews of blocks with the default cube model, so you can now identify your custom blocks much easier in MCreator's interface and block selectors. 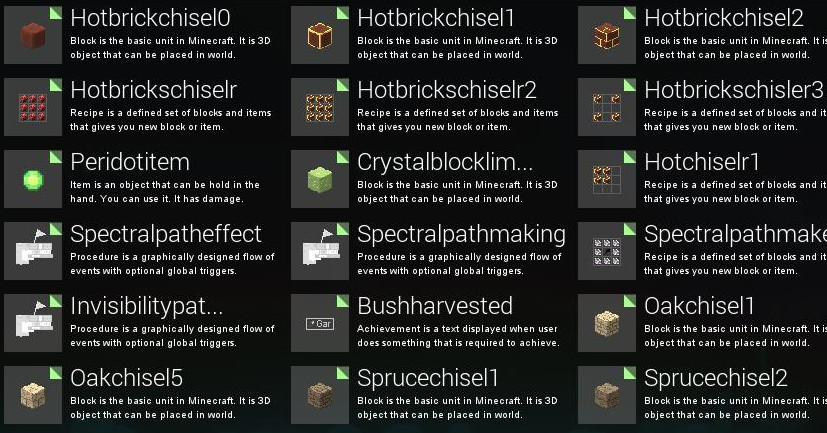 The second most notable addition is a new mod element called potion. With this mod element, you can add new potions and potion effects. You can define procedures on what happens when the potion is applied, active and when it ends. You can define a potion name, color, image, and many other attributes.

MCreator 1.9.0 introduces workspaces in folders. Users no longer need to select a workspace from 3 (or 5 if logged in) slots. Now one can have as many workspaces as he wants. Switching between them is a matter of seconds as each workspace has own gradle instance so no rebuilding is required when switching.

In later versions of MCreator, the user will just need to open the workspace folder with new MCreator. No need for exporting and importing workspaces.

We are also marking .mcr workspace file format legacy at this point. From now on it is not needed anymore as one just opens a workspace in a newer version without exporting it and importing it back. In order to still support moving workspaces, we have added a new sharable zip format which zips your workspace. One can import this zip file on another computer then, but there is no lengthy import process, just the extraction of the zip file.

Custom armor parts names support is added too. Now you can enable just some of the parts (was possible before) and give them different names than just body, leggings, ... (was not possible before).

Code editor got some nice improvements too. Code editor files now open in tabs as any other tool in MCreator 1.9.0. Code editor now features a breadcrumb on top of the editor and you can use this breadcrumb to navigate through files of the workspace. 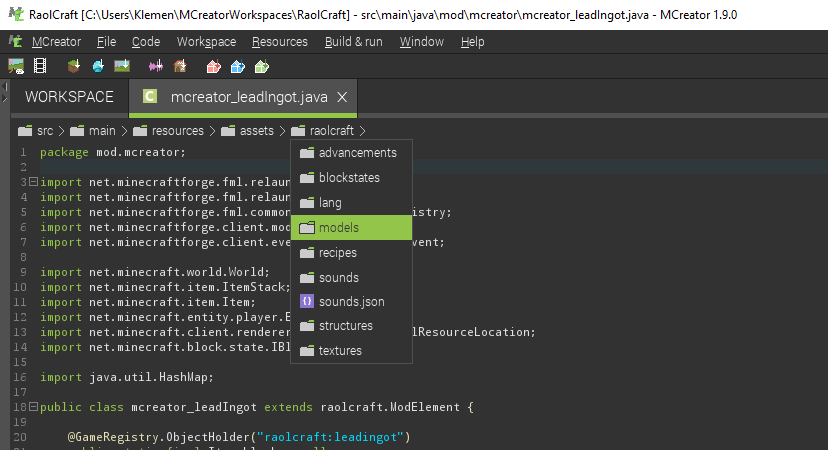 Code editor can now edit any file of the mod element, not just the main Java file. This means that you can lock mod element and edit its JSON files and keep them locked too. When clicking edit code of the mod element button in the workspace, the user is now presented with the list of the files of the given mod element that one can edit.

MCreator 1.9.0 adds support to change registry names and IDs of your mod elements. This way one can resolve many conflicts with other mods and change block and item registry names, for example. 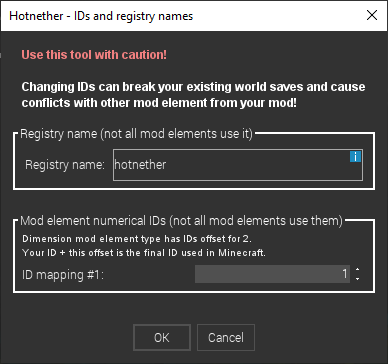 No more incompatibility between mods

Due to this registry editor users can reduce the incompatibility probability. To totally resolve this issue, we have made a system that resolves dimension ID conflicts in case if conflicts still happen by assigning a different ID to one of the conflicting dimensions. Now each mod has own Java package too, so incompatibilities due to same mod element names can't happen anymore. The only source of incompatibility now is if two mods have the same modid.

This update adds more options to define mob immunity. Before 1.9.0, one could only make mob immune to fire. Now we have extended this system to support immunity to arrows, fall damage, cactus, drowning, lightning strikes, potions, and direct player attack (by hand or sword for example). This way, many new RPG dynamics will be possible and new boss mob types can be made.

Are you out of ideas for your textures? We have added a new randomizer tool to the texture maker to help you get the inspiration for your textures. Just hold the Randomize button and wait until your dream texture shows up. We have improved the layout of the texture maker UI too and added many new templates to make a variety of textures made with this tool bigger than ever before.

In order to better comply with copyright terms of Minecraft and Mojang, we have remade all the textures for the block/item selector so we don't use the Vanilla ones. All the textures were made by our graphic designer Matej in hopes to make them as understandable as possible. Some of the missing items such as banners, tall grass, damaged anvils, and some others have been added too. Texture maker textures have been manually remade too.

As with many recent updates, the article would be too long if we described all the changes and bug fixes in depth, so you can see the full list in the full changelog of this release here:

With this update, stages 2 and 3 of the MCreator 2 update roadmap were completed. We are now quite far into the roadmap for MCreator 2.

Leave a comment below and tell us what is your favorite feature and/or bug fix in MCreator 1.9.0. Make sure to share this post with all your modder friends so no one will miss this update.

There were some bugs found in MCreator 1.9.0 so we decided to release a patch update. If you are having one of the following bugs and downloaded MCreator before the time of the patch, consider reinstalling version 1.9.0:

To apply the patch (fix these bugs), uninstall MCreator 1.9.0, download it again and install it again.

There were some bugs found in MCreator 1.9.0 so we decided to release a patch update. If you are having one of the following bugs and downloaded MCreator before the time of the patch, consider reinstalling version 1.9.0:

To apply the patch (fix these bugs), uninstall MCreator 1.9.0, download it again and install it again.

Another bug, when we spam the run client, It run it 2 or maybe 3 times and it is weird to see the content of the console x2

Thanks for letting me know, I will fix this bug in a patch update.

Little Problem: when naming a mod element I can't type a capital c since that's the shortcut for opening the console.

I also have build failed when I create a world, Ahhh I wish I have a ticket :(

You can still open a forum topic and link to it from here. And upload your workspace somewhere else.

Love it... New interface is so much better and everything else also looks great! Good job guys!

Nice! I will try it out after you uploaded the patched version. btw. What are actually the globalvariables for? How do I use them and what can I do with them?found nothing in the wiki.

They are used to store data such as numbers across the mod elements. There are a few forum topics about this, I suggest you to search on the website for them as they contain some useful information about them.

I suggest you to check this page too: https://mcreator.net/forum/50589/all-new-variable-scope-explanations

Can you add this for the next patch or the next update please ? https://mcreator.net/forum/50686/get-entity-health

There is Entity health procedure block in Entity procedures already.

I know that we can change the entity Health, but me, my features is to GET entity’s health. Like a lunar zombie (for example) has a life of 6/20, and I want to set his life to the double. The procedure would be :
If (Get entity health) = 6
Do Set Number variable to 6
Set entity health to [Number variable x 2]

Do you understand want I want or not ?

I do understand you and answered you before. There indeed is get entity health procedure in the procedure maker. Check this screenshot to see where to find it: https://imgur.com/I4h1ekt

We can make new effect potions with their botlle (like vanilla potions), but it's impossible to make a craft for this bottles (potions), so can you fix this bug please in add our potions (only with those we activated their bottles.) ?

This is not really a bug. We are still looking for a way to add potions to recipes, this is why vanilla potions do not work in recipes too. This is more of a feature request and we plan to add this in the future updates. Right now potions can be used in food and procedures.

OMG!! All the thing that annoy me in MCreator its you can not make armor custom model and potion! AND I SEE THIS UPDATE!!! THX THX THX